This is Your Brain on Red Bull – Are energy drinks posing as sports drinks fooling you?

A battle is being waged on North American convenience store shelves. Sports beverages, led by Gatorade are fighting for their lives against energy drinks like Red Bull, Monster and Rock Star. At the heart of the battle is the question: do any of these drinks really boost performance?

Gainesville, we have a problem.

The first batch, it is said, tasted so bad that none of the researchers could stomach it. In the spring of 1965, Dwayne Douglas, a University of Florida Gators assistant football coach asked a question: why did players lose so much weight during practice but never felt the urge to urinate? Robert Cade, director of the UF College of Medicine’s renal and electrolyte division would later recount, “that question changed our lives”. Cade’s wife gets the credit for suggesting they add a little lemon juice.

The following year, armed with their new magic potion, the Gators rolled to an 8-2 record and established a reputation as a come-from-behind second half team. A small Indianapolis beverage company licensed Gatorade the following year and the sports drink industry was born.

Started in 1987, Red Bull was the brainchild of Dietrich Mateschitz, the secretive mastermind that turned a carbonated and caffeinated version of an Asian energy tonic into a global media phenomenon. Red Bull launched a new beverage category and continues to dominates the 37 billion dollar global energy drink market. Most people recognize the brand as a sponsor of sporting events, professional soccer clubs and motor racing teams.

Red Bull and other energy drinks have squarely positioned themselves as sports drinks that enhance athletic performance. Red Bull’s Malaysian website extols the benefits they provide for “the World’s top athletes” and lays out specific guidelines. One can a half hour before training or competition, 1-2 cans during the activity with water and 1 after to aid recovery. Red Bull’s North American website is less specific, relying on sponsored athletes like stand-up paddle-boarder, Robby Naish to prescribe the optimum consumption schedule: “before, during, or after”.

It’s been well established in the academic literature that caffeine increases endurance, reduces the perception of fatigue and improves reaction times. Based on their single serving size containing the caffeine equivalent of one cup of coffee, Red Bull’s marketing message plays heavily on these same performance enhancing qualities .

Taurine, another major ingredient of Red Bull, is an amino acid naturally present in your body. As a supplement, taurine has not been widely studied, likely because the body can make plenty of it’s own. One recent study did however test the effects ingesting caffeine combined with taurine on short term memory. Since many University of Wisconsin students were using Red Bull to perform better on exams, researchers tested to see if caffeine mixed with taurine could improve performance on short term memory tasks. The results showed no improvement in short term memory but did uncover a surprising effect on heart rate.

Just when caffeine should have been raising heart rates, the combination with taurine actually lowered them. It may be that mixing taurine with caffeine counters the very performance benefits that Red Bull promotes.

During prolonged intense physical exertion of over an hour, consuming carbohydrates can restore blood sugar levels and supply glycogen to working muscles. At 11 grams per 100ml, Red Bull packs nearly twice the sugar concentration as Gatorade’s 6 grams. That should be good right?

A 2009 study published in the Journal of Nutrition and Metabolism showed that glucose concentrations above 6 grams per 100 ml significantly reduced fluid absorption in the gut. Tossing back an energy drink during a hard workout is likely to leave you more dehydrated than drinking nothing at all.

If you are thirsty and fall somewhere between these two groups, try water.

Painful stomach cramps and bloating can make it very difficult to continue cycling. Adjustments in nutrition, effort and position are the key to changing your enraged gut to a settled tummy.

The stomach is able to process approximately one gram of carbohydrate a minute or 60 an hour. If you eat more than this, it will not make the process go any faster, you will just get an upset stomach cycling.

If you mix sugars it is said that you can increase the carbohydrate intake to around 90 grams per hour. (Ie. mix glucose and fructose – I am still looking for this study)

So, per hour plan on having 45-60 grams of carbs if just from glucose and 55-75 grams if from glucose and fructose. (another reason I like honey stingers so much – glucose:fructose ratio of 1:1)

As you continue to eat your belly is going to get full. Now you have three problems you:

I used to think that this is just the way it is in cycling. You cram power bars and gatorade down until you feel like vomiting, and then you continue to eat and drink as much as you can until the ride is over and that is how you knew you did nutrition properly. Oops.

If you start to feel this way switch to water immediately… and if you can convince yourself to slow down to about 70-75% of your aerobic capacity that would be a great idea as well. The water is to decrease the sugar content as it is too high and difficult to process. Going forward you may need a mixture of sports drink and water. Slowing down will allow the blood to return to the stomach and help to digest.

Perhaps the easiest thing to quickly look at is your position. If you continually get an upset stomach cycling it could be because your position is too aggressive (leaning over too much with a rounded back, or your hips are not open) and that can put undue pressure on your abdomen making it difficult to digest food. 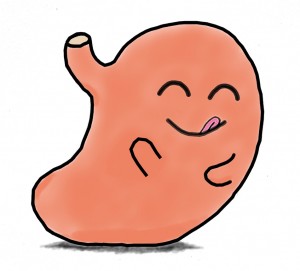 If you have tried this already and still are having stomach/vomiting issues then it is time to look at what you are doing off the bike. Your esophagus has muscles that help push the food down and at the bottom is a sphincter that keeps the food from coming back up!

Now some of you may not want to acknowledge this part… but… caffeine, alcohol and smoking all relax the ever important esophagus muscles and sphincter. So if you continue to have problems look to cut these items out. Also, only eat 2 hours or longer before cycling, longer is better if you have a sensitive tummy.

An upset Stomach cycling can destroy a ride, but if you know the signs and catch it early enough you can fix it without it slowing you down. 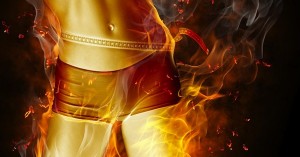 Thursday is doughnut day at my office. Now I don’t know about you, but I like a good doughnut! I used to sneak three! Who needs three doughnuts before noon? As I got a little more serious about cycling I decided to reason with myself, I decided that one doughnut should suffice. I did not cut them out all together, and I think that is important.

Why did I want three doughnuts? Well, it is likely that I ran out the door on the way to work because I valued sleep more than food. I am not a morning person. I recently heard a phrase that goes something like, “Eat breakfast like a king, lunch like a prince and dinner like a pauper.” Although I do not necessarily think they had the cyclist in mind, because of hard workouts, I do believe in the theory. Unless you just returned from a long bike ride, then your body likely does not need all the calories in the evening as it is shutting down for bed; on the other hand, in the morning, it is just getting fired up!

Swap unhealthy snacks for healthier snacks. Even swapping Potato chips for popcorn is a win. Cake for dark chocolate. Ice cream for frozen fruit. I used to get hangry (hungry angry) between 4 and 5 o’clock, I would wait until Mary (the receptionist at work) left her desk so I could steal the candy that was meant for the clients. Now I go to the grocery store and buy a veggie plate and stick it in the lunch room. Simple.

Here is definitely one of my weak points. Thank God for my Fiancée! She loves cooking! I buy her a cookbook and she thinks I am wonderful. Go figure. It has nothing to do with my hidden agenda of having delicious and healthy food cooked for me. Variety is the spice of life, your body needs different nutrients in order to stay healthy; otherwise, we could just eat power bars and honey stingers all the time.

Fuel Properly During and After Rides

I used to get on a bike, go for a rip, have a few swigs of water, then take a shower and eventually get around to eating. I would wake up sore and tired and it would undoubtedly turn into a couch day. Now when I ride i make sure to fuel properly. That in itself allows me to ride harder and get in a better workout. Then I eat within 30 minutes after a workout, and this allows me to recover more quickly. The faster you recover the better cyclist you will become. If you eat within 30 – 60 minutes after a workout your body will fast-track those nutrients to muscle repair and glycogen replacement. Cycling is really about fast recovery.