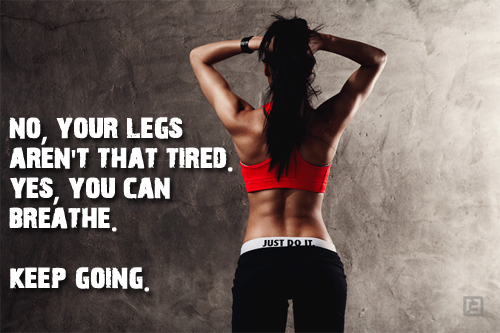 In a study published in Medicine & Science in Sports & Exercise, 24 participants were told to do a cycling test to exhaustion. Half of the participants then underwent a two week positive talk intervention while the other half (control group) received no special treatment. The results?

The two week positive talk intervention involved the self talk group selecting four positive/motivational statements to use over the two weeks while exercising and then were told to integrate them into their test. Simple.

Most people believe in the power of positive talk but do not realize how important it really can be. Endurance is a mind over body equation. Most of us give up mentally well before our physical bodies fatigue. We have all been there many of times, whether it has been cycling, exercising or life. I know I continually envision rockets and say “lets go” while cycling. At work I continually repeat “I love my job, I love my job.” So I am convinced.

I have been on the flip side where I have done the negative talk and said “I’m too hot, my knee hurts, I’m too tired etc. etc.” and generally quit shortly after my mind goes there. Don’t subscribe to that way of thinking.

This is easy, I am a beast, I can do this, love this feeling, crushing it, let’s go, almost there, and I AM AWESOME. Feel free to suggest more in the comment section, but I like to keep it simple. I also like to say this out loud and make other people laugh once in a while as that also helps.

When it comes to endurance mental health is 80% of the battle. Be positive, humorous and happy. It will make all the difference. Positive talk increases endurance.