With cycling’s focus on aerobic capacity, metabolic capabilities, and ability to suffer, it can be easy to forget that all of these important aspects are what drive your muscles that power the bike. Boiled down, that is all pedaling a bike is – recruiting your body to produce energy to move muscles to move the bike forward. What muscles do you you use when cycling though? And in which part of the pedal stroke do you use each one? Read on and you’ll know. 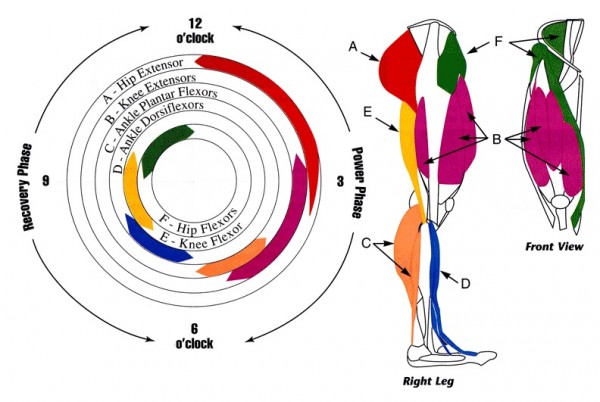 What Muscles Do You Use When Cycling?

The short answer is a lot. Many of your leg muscles drive the pedals, but you also use core muscles to push those legs muscles off of and hold you semi-upright on the bike (for the sake of this article, hip flexors are part of your core). You use your arms in a supporting role. But mostly, it is your legs that do the work. The other muscles only need enough conditioning and strengthening to allow your legs to do their work without distraction. Do not be fooled; enough conditioning and strengthening for core and arms is more than just riding. 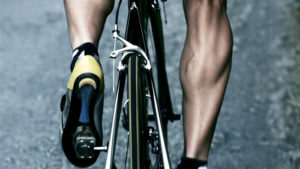 Looking at a group of cyclists standing around, their most prominent feature is their calves – the gastrocnemius. They are chiseled and defined and often quite a bit larger than the average person’s calves. What role do they play in the pedal stroke and power production? The answer is that they only transmit the force of power produced in the quadraceps for most of pedal stroke.

The lower leg can be impressive in appearance, but in reality, it provides little of the force from a cyclist’s legs. The size and shape is not an indicator of a rider’s strength. At a given level, most of those factors are genetic. Calves will tell you nothing of a rider’s ability. No need to be intimidated by chiseled calves.

The Meat and Potatoes

Between the knees and the hips is the seat of a cyclist’s power. That seat of power is most productive on the down stroke of the pedal stroke – from twelve to six o’clock. This is when your knee is extending and larger muscles put their effort into the pedals. This is different from six to twelve o’clock, when smaller muscles bring the pedals back up and around, providing little else other than reloading the crank for another go-around.

The muscles that keep you moving (in order of power produced) are the quadraceps at the front of your thighs, gluteals in your behind and hamstrings at the backs of your thighs. The quadraceps and gluteals extend your knee from its most bent to about four o’clock. Once the pedals get there, hamstrings take of the bulk of the workload bringing your pedals back towards six o’clock. 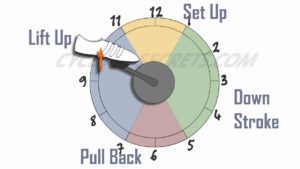 Implications for Your Pedal Stroke

Lots of people say you should have a round pedal stroke. Knowing what you know now of the muscles involved, you know that it is impossible to produce even power throughout the pedal stroke from one leg. The muscles you recruit between six and twelve o’clock are not powerful enough to make an impact on overall force. Almost all of your forward motion on a bicycle comes from pressing down on the pedals.

This is different from having a smooth pedal stroke, which is probably what most people mean but have not articulated properly. Smoothly transitioning from each phase of the pedal stroke will avoid jerky motions and add to efficiency. Pro cyclists look like they have round pedal strokes, but that comes from smoothness and hours upon hours of perfecting muscle memory. Guaranteed they are producing far more power in the front end of their pedaling.

Now that you know what muscles you use when cycling, you can use that to understand proper seat height and use it to help diagnose knee pain. Hamstrings pull on the knee and quadraceps push on the knee. If the outside or back of your knee hurts, it could be the hamstrings pulling too much on your knee. Try lowering your saddle to lessen the strain on your hamstrings. If your knee hurts on the inside or front, your quadraceps are pushing on your knee too much. Try raising your saddle to lessen the strain on your quadraceps.

Change your seat height in small increments. Big changes pull other variables into the mix and are harder to get used to.

Muscles Make the Pedals Go Around

Having a well-rounded understanding of “what muscles do you use when cycling” can help you focus on a better pedal stroke, strengthen comparatively weak muscles and diagnose problems. A little foundational knowledge can make you a better cyclist because you know what your body is doing and how it makes your bike go.