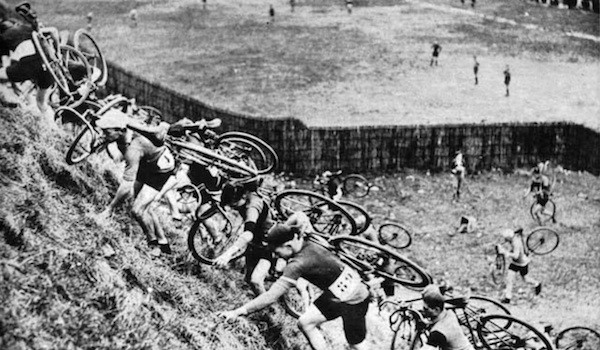 Cyclocross is a discipline within cycling that is a crossover of mountain biking and road biking. Back in the day in colder climates, riders needed a way to keep riding their bike through the winter months. A standard road ride was too long and cold. A mountain bike ride could have snow and other inconvenient factors along with being too long as well. They needed a way to ride that limited their time in the cold as well as was hard enough to keep them warm. The answer was cyclocross. Cyclocross is a cycling discipline that is ridden on a short, technical course of pavement, grass, dirt, mud, sand, and snow which includes features such as barriers and run-ups which force riders to dismount their bike.

What Races Consist Of

The main discipline within cyclocross is ‘cross racing. Races are thirty to sixty minutes in length, depending upon your category, and are raced on a taped off course that is about two to four kilometers long, or about five to fifteen minutes per lap.

Races typically start out on a long opening straight of pavement or dirt, and then take a turn to pretty much anything. The surface is always changing and is often very technical with turns. Races, a lot of the time, are run in parks so they take advantage of whatever features are around and can be utilized. Things like steep hills, stairs, sand volleyball courts, and off-camber sections are used a lot to create a difficult course for you to ride a bike on, let alone race. To top these features off, wooden barriers are used to force you off your bike, unless you’re a real savvy bike rider and can bunny hop them. Also, super steep sections are often placed on the course so you have to dismount and run up them.

What Kind of Bike is Used

A special bike is ridden that is a “cross” between a mountain bike and a road bike. The bike more closely resembles that of a road bike but with mountain influences. The first thing that is different from a road bike is that the tires are bigger but smaller than mountain. The tires are also knobby to give traction through the corners and up hills. To allow the wider tires, the frame has a larger fork along with a wider rear end of the bike. The clearance not only allows the tires to fit but also creates room for mud to accumulate without bogging down your wheels.

The brakes are also a bit different to allow the larger tires along with having the option of disc brakes like a mountain bike. Aside from those minor differences, everything else is the same as a road bike; the shifters, the derailleurs, except for the gearing. A bit smaller gears are used as the speeds are slower than down an open road. A ‘cross bike for racing is also a great tool that can be ridden on gentle trails, dirt roads, and in some snowy conditions making it a great all around bike to ride.

Just like any other sport, cyclocross has its own niche culture. It’s not road and it’s not quite mountain. ‘Cross culture has a bit of the seriousness of road with the laid back atmosphere of mountain. Riders can take their training, racing, as well as equipment very seriously but at the same time they’ll have a few bottles of Belgian beer to heckle the other racers as well as to enjoy after their race with friends.

‘Cross culture in Europe, particularly in Belgium where pro riders are celebrities and races are watched by thousands, is another level of craziness. Courses are more challenging and the support riders receive is unmatched but North American ‘cross races have their own awesome culture that gets riders hooked from their first weekend of racing.

Cyclocross is growing tremendously all over the world and for good reason. Because of how awesome it is. Just riding the courses are a lot of fun and racing adds another level of fun to it. That along with the ‘cross culture creates an appealing sport not only for those who ride road or mountain but anyone in general. ‘Cross is a great way to get into the sport of cycling. Although a ‘cross bike is best for a ‘cross race, a mountain bike can still suffice. A road bike will not however. And as you get hooked you can easily make the switch to a ‘cross bike. Cyclocross is not only quite the sport within cycling but quite the sport in general. Get hooked now otherwise when you do in the future, you’ll have wished you did before.