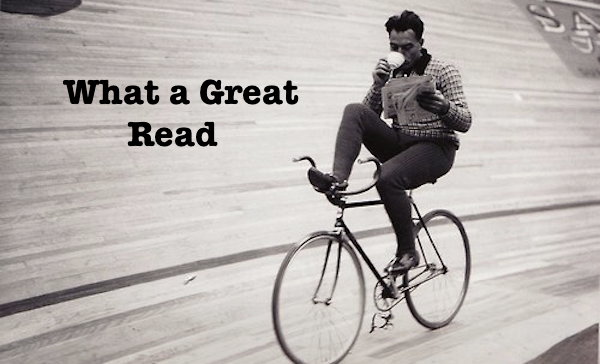 Training as a cyclist is as much about motivation, studying athletic skills, and learning about other cyclists as it is about putting your foot on the pedal. In order to know everything you need to know about your sport you will want to read (or listen) to some great cycling books (or audiobooks). Here’s the top ten books about cycling for cyclists.

This is literally a rule book that was written by four professional cyclists who basically wrote down anything and everything a cyclist may need to know. The Rules covers everything from biking etiquette, motivation, and tan lines, to how many bikes to own. This book is hilarious but comes with some good advice as well.

This is the story of two ex-pros from the United States who dreamed of building a cycling team capable of beating all others in the world. They went to Rwanda where the country’s natural athletes were plentiful and ready to work. This book handles all the ups and downs they faced while they pursued their cycling dream.

Racing Hard is a wonderful book that chronicles twenty years of cycling. Collections of reports tell the story of everything that cycling went through as witnessed by William Fotheringham, a lover of the sport. Tragedies and triumphs and scandals are all in here, which gives a nice history of cycling.

This is a very motivational book. Charly Wegelius was an elite pro-cyclist who competed in all the tours, was in great demand, and was considered to be an incredible athlete. Despite all of this, he never once won a race and never wanted to. His job was to set a grueling pace for the group at the beginning of the race, ride himself into exhaustion, and watch a teammate take the win. This is an incredible story and a unique look at the sport.

Joe Friel is one of the most trusted names in endurance sport coaching. His book is a well known resource for teaching cyclists a how to train for endurance cycling. The newer editions include new technology and training techniques to keep cyclists up-to-date. The book will also teach you how to draw up a comprehensive self-training plan that you can shape to your own personal goals.

This is an interesting book about doping in the sport of cycling. Andrew Tilin was journalist trying to get amateur cyclists to talk to him about doping and the effects it had on their athletic ability and their personal lives. However, no one was willing to speak to him so he decided to dope himself for a year. An interesting book and a must read for people looking to be competitive cyclists.

This is a book that chronicles all the innovative bicycles of the last century. This includes racing, touring, and other bikes. This book shows pictures of the bikes, what kind of bicycle they were, and why they were innovative. This is a nice history of the design of bicycles.

8.       The Athlete’s Guide To Recovery by Sage Rountree

The author, Rountree, is an Ironman athlete, coach, and yoga instructor who lays down a valid argument for why rest is as important to a cyclist as pushing your limits. He also gives tips on how to capitalize on your down time to make you a better athlete by using everything from massages to compression sleeves.

9.       The Secret Race by Tyler Hamilton and Daniel Coyle

This is a book about Jacques Anquetil, the first person to ever win the Tour de France five times as well as the first to win all three grand tours. He is a fine example of an athlete and an extremely quirky person. Anquetil’s cycling life is as interesting as his private life (which was quite scandalous) and will keep you reading until the last page.

These are some great introductory books to the world of cycling literature. Motivational stories, histories, and fictional novels are all worth exploring as you navigate cycling both on and off your bike.