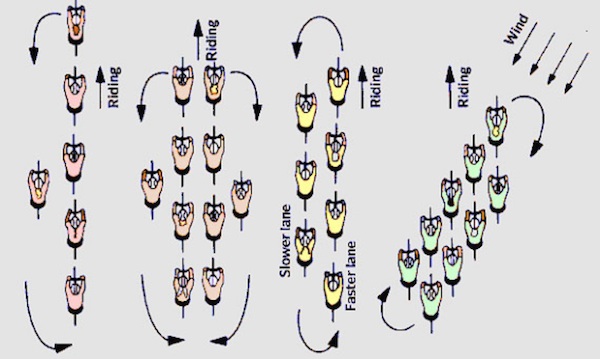 Two things that slow you down in cycling are uphill’s and wind. Some look to avoid them while others embrace them. Riding in the wind can be a drag but it’s going to happen so you should know how to get through it the most efficiently.  The wind can also have some good benefits, one being that you can ride a lot faster than you otherwise could when it’s at your back. When you are in a group riding into a headwind you can actually get more of a draft behind the other riders allowing you to pedal with much less effort. A side wind can give you a real advantage if you know how to ride in it as the other riders that you’re with will have to pedal that much harder because they are poorly positioned.  As with anything in cycling, the more you do it the better you’ll be at it.

On solo rides or rides with one or two others, headwinds can slow your ride dramatically while you have to pedal much harder. In a group however, the draft of a rider is magnified. The first rider still has to pedal extra hard, as they would on a solo ride, but the riders behind don’t have to pedal with nearly the same amount of effort. Since you are in a group, everyone can take shorter turns on the front in the wind keeping your speed closer to what it otherwise would have been.

Tailwinds are fun whether you are solo or with a group. You can ride at speeds almost like you have a motor on your bike. The downside is when you have to turn around. The one drawback from tailwinds in a group is that you get less of a draft behind the rider ahead. Even though the first rider can go X amount faster, the riders behind are going to have to pedal at a closer effort to the rider on the front. You all are still going faster though so it’s still a benefit to all.

Riding in a cross, or side-wind, in a group is really where knowing what position to ride in will benefit you. The first thing is that you obviously can’t see the wind, unless you spot a flag or something else blowing, so you have to feel it. When it’s a strong wind this is easy but when it’s only slight there is still an advantage to riding downwind of the rider in front of you. You just have to then know where that downwind is. Overtime you will get good at feeling where the wind is coming from.

First we will simplify things down to two riders riding in the wind. The wind is coming from the left. Downwind, or where the best draft for the second rider, is going to be slightly behind the first rider and to the right. This will be just slightly to the right, the closer the wind is to a head or tail wind and when it’s closer to ninety degrees from the left, the draft will be further to the right of the first rider rather than being slightly behind them.

Now in our two rider scenario, the first rider took a short pull on the front and is going to move back behind the other rider. The first rider eases off the pedals slowly and moves slightly to the left and back. The second rider then slides left at the same speed filling the position the first rider was just in.  The rider pulling off then slides right passing their front wheel behind the now, first rider’s rear wheel and then slightly forward and to the right where the “sweet spot” is.

Pro Tip: When pulling into the front position it is important to keep a steady pace, one that you were holding while drafting. Many novices hammer on the pedals and force a gap behind them making the echelon less efficient and creating an accordion effect that forces people drafting to use excessive energy.

Adding it to a Group

Now taking the above scenario and adding riders to it gives an echelon.  It is the exact same thing except that behind the second rider is a third and so on. Because each rider is riding, in our scenario, slightly to the right of the rider in front of them, the echelon can only be so wide as you run out of road to the right. What then happens is a second echelon is formed with a bit of space before the first. Often times before this happens however is that a trail of riders will be riding down the extreme side of the road trying to get a draft. They can’t get as good of a draft as the riders in the rotating echelon so they will often lose ground when they tire.

In a rotating echelon no one takes a full pull on the front but rather rolls through the first position in the wind. As soon as a rider hits the first position they slide back and move gradually to the right one by one ensuring that they don’t hit their front wheel on any of the riders in the first row but no further back. This creates two lines of riders. It’s like a pace line, just tilted. When the rider moving backwards down the line reaches the last rider they accelerate forward into the last riders draft and follow them in that same position as the front row continues to slide left.

If you are in that situation where there is a cross-wind and no one is riding an echelon you’ll be forced to ride down the very edge of the road, often known as the gutter. The key to riding in this position well is being able to see past the rider in front of you so you can see where the exact side of the road is and if there is anything sticking out. A good trick to do here is to ride with your body slightly to the right of where you would normally sit on the bike with your head tilted even further to the right. This will give you that extra little bit to be able to see what’s coming up.  And if anything does come up, just push your bike back to the left, in our scenario.

Riding in the wind takes practice and even if you know how to, others in the group may not know how which can be frustrating. Cross-winds can be dangerous with the overlapping of wheels so just make sure you pay attention as to not cause a crash as well as to look out for others who might cause a crash. Riding in the wind isn’t always fun but at the very least it can be made a bit more enjoyable if you know how to ride it. Stay in the right position on the wheel in front of you and being a bit more aero always helps too.