Think of the fat tire bike as the monster truck of the cycling world. You might have seen one before; a bike that looks like it has car tires. To put it mildly — they’re FAT. They look ungainly, and for the most part they are. Bearing in mind that the over-the-top fat tire bike is not designed for speed or responsive handling, the fat tire bikes look really cool and they’re a blast to ride in conditions that a normal bike would go nowhere with. Following a brief run-down are ten of the best fat bikes out there right now. Have another one you’re a big fan of? Let us know in the comments below.

Fatties have been around for more than a decade but have only captured the mainstream cycling world’s attention over the past couple of years. It’s due in part because of their versatility and the growing popularity of extreme adventure riding and racing. For example; hundreds of competitors ride fat bikes over the challenging Arrowhead 135 course every January in Minnesota. If you’re interest is peaked, there are a lot more racing and events out there just waiting for you and your best fat bikes.

Standard mountain bikes typically have a tire width of about 2 inches. Fat bike tires are about double that — or more even. The massive tires can also be ridden at dramatically lower pressure. The width allows fat bikes to float on loose, non-solid surfaces where any other bike would just sink in and go nowhere.

Mountain bike tires range from about 25–65 psi, but the gigantic fat tires can handle pressures as low as 10 psi or even less. Lower pressure allows the tire to grip the ground under the rider’s weight, drastically increasing the contact area of the tire thus increasing traction even of loose surface such as snow or sand where the fat bike is at home.

For other conditions, such as sand or soft snow, the extra width and low pressure allows the rider to float more easily over the softer, more unstable surface. The tires react to snow-packed and icy surfaces gliding through icy corners that can send you hurtling to the ground on a standard mountain bike. As an added benefit, the squishy tires also make for a much more comfortable ride on any surface as it’s a built in suspension.

The Best Fat Bikes For You

Now that you know a bit more about fat bikes here are ten of the best fat bikes for you to consider for a totally different riding experience.

The Trek Farley may just be at the top of the food chain, both in performance, looks, and price. It also accommodates one of the widest tires out there at 5 inches.

The Ice Cream Truck is near the top of the best fat bikes list primarily because it has one of the largest, most voluminous tires out there at 4.8 inches. And it’s eye candy. 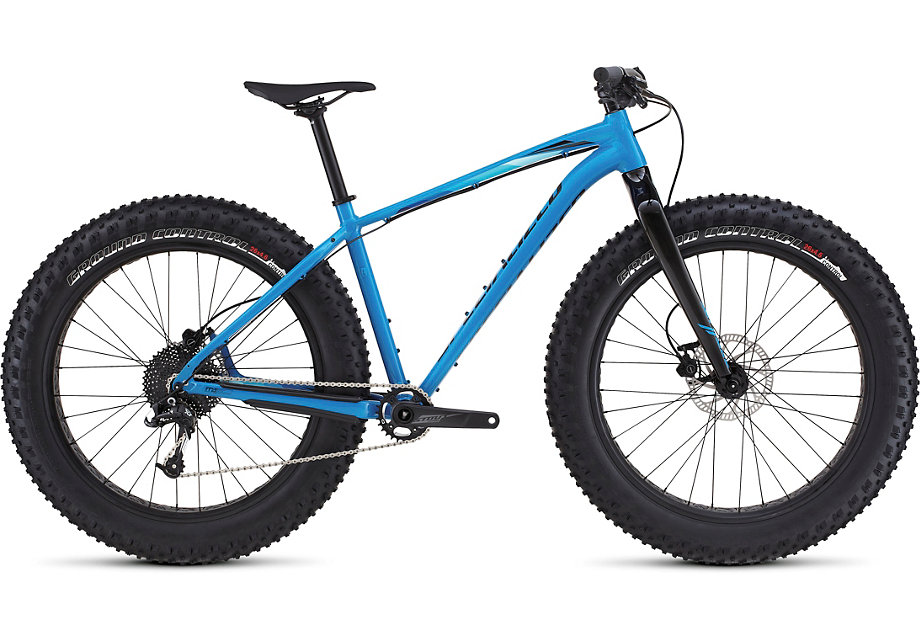 A worthy first-time fat bike, with only slightly less width at 4.6 inches.

Tires getting smaller at 4 inches in width, the Double Double is at home for daily use on any surface.

The echo is performance-oriented, with clearance for 4.8 inch tires.

The Kahn, with over five inches of travel and a massive foot print, allows a rider to stick lines only available to mountain goats and downhill pro’s in the past. When traction is virtually unlimited, a rider can push through limits. You only need to know one thing: This fat bike is full-suspension since Turner only makes full suspension bikes

The bike for those who ride in every season on every surface. Fans of the “lefty” fork will recognize this unique design on the Fat CAAD.

With an innovative carbon frame weighing in at an incredible 1550 g, this is one of the lightest fatties out there. The Dude may look fat but don’t let that fool you – nothing stands in its way.

Not tied-down to specific single-season use, and much more than a just ‘snow bike’, the trail-orientated geometry and fat tires lend themselves well to year-round use. This bike is all about playing. Moonmen bikes are foremost about the joy of riding, especially when you’re floating over a fluffy snow, bike packing across the desert, or taking a podium at your local race series. This bike company is so new, that reviews are for the most part, unavailable. It also has so many different options, that listing even part of them is not fair, but here are the basics: