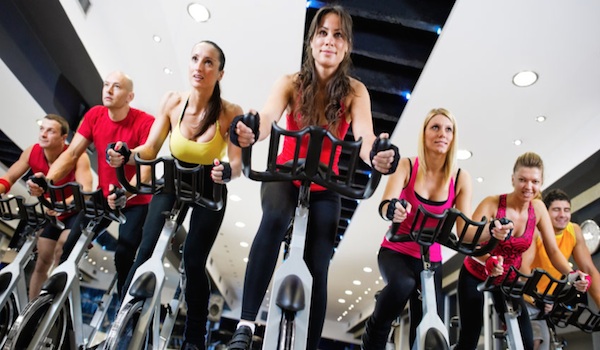 Indoor cycling, often referred to as spinning, is a worldwide exercise phenomenon. Today it is one of the most popular group classes in fitness clubs and gyms around the world, attracting millions of people each year. Indoor cycling is a favorite of many fitness gurus and outdoor cyclists who use it to stay in shape during the off-season, too.

Indoor cycling began where a lot of great things seem to begin: a garage. Johnny Goldberg, a South African immigrant living in California, was a fitness instructor, endurance cyclists, and a competitor in cross-country and ultra-marathon races. He recognized a need for training indoors and subsequently thought of a way in which to replicate road cycling in his garage. He used his new indoor training regimen to break a record when he biked across Arizona (544 miles) non-stop for over 29 hours.

A year after breaking this record he started the first indoor cycling class in Santa Monica. His classes were open to large groups and focused on heart rate training, motivation, and breathing exercises. His new class used stationary bikes with sophisticated ergonomics and geometry to closely resemble a racing bike. With the help of a fellow cyclist, John Baudhuin, they installed 150 of these stationary bikes in several different gyms and fitness centers.

In 1993, Rolling Stone magazine reported that indoor cycling was the ‘hot’ new fitness regimen not only for cyclists in their off-season, but for the general public as well. This led to a whole new market of people who could use indoor cycling to get in shape and stay in shape.

Mad Dogg Athletics, Inc. was found by Goldberg and Baudhuin in 1994 with the idea that the start-up company would further develop indoor cycling as a valid fitness regimen. This was when they also trademarked the word Spinning. Business boomed and stationary bikes began pouring out of manufacturers and into fitness centers everywhere.

By the following year, Mad Dogg developed a teacher’s certification program for people looking to teach Spin classes. That program is now the standard for indoor cycling certification and education around the world.

Today, there are five stationary bikes produced by Mad Dogg and their affiliate, the Spinning program, for use in gyms and fitness centers. Another six models are produced for in-home use from this provider. There are many other brands that offer these types of bicycles as well. Then there are lines of spinning gear, accessories, DVDs, and full classes and programs for people to choose from. Millions of people use indoor cycling to get in shape while avid amateur and professional cyclists use indoor cycling to maintain their fitness in the off-season or when the weather prohibits outdoor riding.

Indoor cycling was designed to help athletes in the sport of cycling keep training no matter what. Cyclists could build an indoor training regimen and use it to break records and meet goals just as Johnny Goldberg did in Arizona. However, the benefits of indoor cycling are so numerous and so enticing that indoor cycling spread to the general population as a fitness and exercise routine.