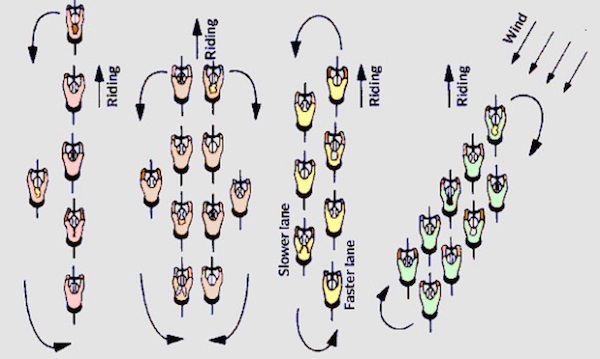 Riding in a group can bring a lot of benefits that you can’t get while riding on your own. A paceline is how a group of riders rotate through trading spots riding the front in the wind. Riding in this way is the fastest and the most efficient way down the road. However, knowing how to ride in a paceline is imperative as if you can’t, you not only pose a risk to yourself but others as well due to the possibility of crashing. Riders in the group can also give you pointers as you get the feel for how things roll.

A paceline starts with two lines of riders riding single file with one line moving forward while the other one moves backwards. This allows for a constant changing of the front two riders that are in the wind allowing the work to be spread over the group more evenly. The rotation is always continuous giving it the name “rotating paceline”.

When You’re at the Front

As you approach the front, the rider ahead of you will slide to the left and slow down a little. As he or she does this, you keep pedaling at the same speed. Do not accelerate. Stay the same speed and continue straight in your line. As you’re doing this look over your shoulder or under your arm to see where the rider is that just pulled off. Once you see that they are far enough back, slide over in front of them taking care to not take out their front wheel.

Once you are here, keep pedaling but take about two “soft” pedal strokes where there is not much pressure on the pedals. This will slow you a little but not so much as the rider now behind you has to slow. You are only slowing the difference in speed of the line that’s moving forward and the line moving backwards. Since the paceline is rotating, you do not need to do anything to signal the rider behind you to pull through. However, if you are taking longer turns on the front, give a slight “flick” of the elbow out as you slide to the side. This indicates that you are done pulling on the front and for them to pull through.

When You’re at the Back

As you slide backwards in the group you will eventually get to the back and have to switch lines to the one moving forward. You will probably have an idea of about how big your group is so when you are getting close, be ready to slide over. As the last rider slides over and is moving back up past the rider whose wheel they were just on, they should say something such as “last” or “last rider”. This gives the rider moving back a heads up that they are now last and that they need to slide over and reaccelerate to get on the wheel that’s now moving forward.

Always look to make sure that there is no one there otherwise you could ride straight into someone. To avoid sliding too far off the back and having to reaccelerate hard, you should start accelerating before the last rider comes past you. As you reaccelerate, you should start to slide to the side and end up having your front wheel move past the other rider’s rear just as you’re going the same speed as them. This takes practice but you’ll get the gist quick.

Pacelines don’t always rotate in the same direction due to the wind. If there is no wind then riders should rotate in a counter-clockwise direction as it’s easier with traffic. (Except if you’re in the UK or Australia, yours will be the opposite.) When there is wind however, you should always pull off into the wind. This means that if the wind is coming from the left, you ride counter-clockwise, and if the wind’s from the right, you ride clockwise. Riders will always be sliding to the side of the wheel in front of them that’s more out of the wind.

If the group is rotating in the wrong direction, as the first rider slides over, they risk taking out the front wheel of the rider that’s behind them. If the group is rotating in the wrong direction, yell that you are switching the rotation as you get to the front. When you are on the front, don’t pull off but rather keep riding to allow the riders sliding back to slide back a bit and then pull off in the other direction. If you need to make room for you to pull off, slide slightly to the opposite direction and moving the riders immediately behind you over, and then pull off.

When a group’s riding fast they will typically always ride a rotating paceline. When a group’s out for more of a training ride or relaxed ride, they will ride a double paceline. This is where the two lines ride side by side at the same speed and two riders on the front are in the wind at the same time. This allows for longer pulls of the riders on the front as well as for everyone to be able to have a conversation instead of just riding past each other. Pulls can be as short as one minute or as long as ten to twenty minutes depending upon the group and riding.

When the two riders on the front are ready to pull off, they first make sure that there is no traffic and then one slides right and the other left, moving backwards down the side of the two lines. When they get to the back, they reaccelerate and pick up the last two spots in line. Pulling off in this way can only be done when on wide enough roads. When the roads are narrow and/or there is not enough room due to traffic to ride four wide, the group rides a slowed rotating paceline essentially. When the two riders on the front are ready to pull off, one accelerates a little moving ahead of the other while the other one slows and moves back. The rider on the side that just moved up now slides forward and takes their spot on the front of the bunch. The group should rotate twice as much as when the rider is on the front, they are on the front for two turns essentially. Rotating in this way also allows you to talk to different people as the double paceline only really allows you to talk to the same person if there is an even number of people.

Some sort of paceline is typically how any group rides aside from a race or an event that has full use of the roads and where you can ride more than two abreast. Knowing the different kinds and how to ride in each of them will allow you to comfortably ride in a group along with being less sketchy and avoiding causing a crash. Also, an easy way to pick out a newer rider in a group is how they ride. If you mess up as well as ride sketchy, meaning you ride in a way that could cause a crash, you will probably be heckled as well as tried to drop. Everyone is new at some point but knowing how things work and then getting a few pointers in your first few group rides will allow you to fully enjoy and take full advantage of them.