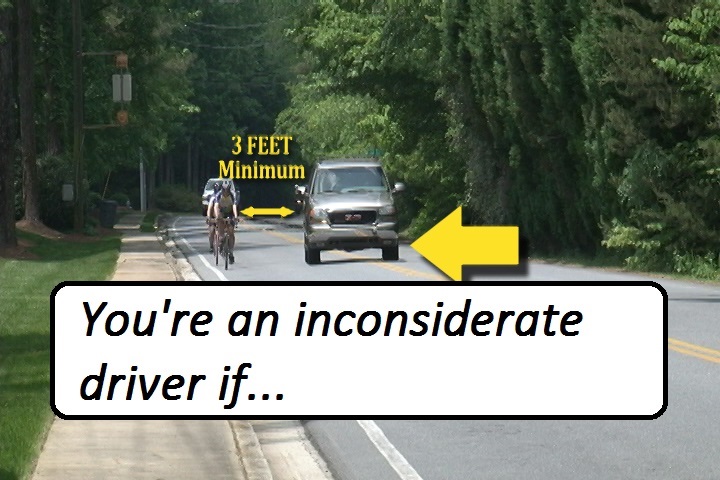 (This article first appeared here but with a different title and word describing drivers who put other people’s lives in danger. The word used was strong but as a car zipping by you less than three feet away gets your attention, so does the use of a vulgar word. It is re-published below for those who didn’t care for the use of that word and for those who wanted to share it but didn’t because of that word.)

Riding a bike on public roadways can mean placing your life in someone else’s hands. Not always the most comforting of feelings. Drivers don’t have the same degree of fear or vulnerability when passing a cyclist so they often don’t even realize the danger that they are placing another human being under because of their actions. Because of this, drivers have a tendency to be inconsiderate to cyclists. They may not realize it because to them, there is no real threat or degree of aggressiveness that they feel they are placing on anyone. This of course is some drivers as others will blatantly try to place cyclists in danger whether it’s buzzing them or slamming on the brakes in front of them. Regardless of if you’re intending on placing a cyclist in danger or if you don’t think you are, you’re an inconsiderate driver if you do any of the following. This website is obviously catered toward cyclists so please share with all of your non-cycling friends as well to keep all of us cyclists safer on the roads.

You’re An Inconsiderate Driver If…

Drive in a respectful, safe manner looking out for yourself as well as that of others. You are not the only one out on the road. Imagine if you hit a cyclist as this sad, tragic story recounts. You would have a very difficult time living with yourself knowing you took the life of someone with so much left to live. Drive safe. Everyone will thank you.