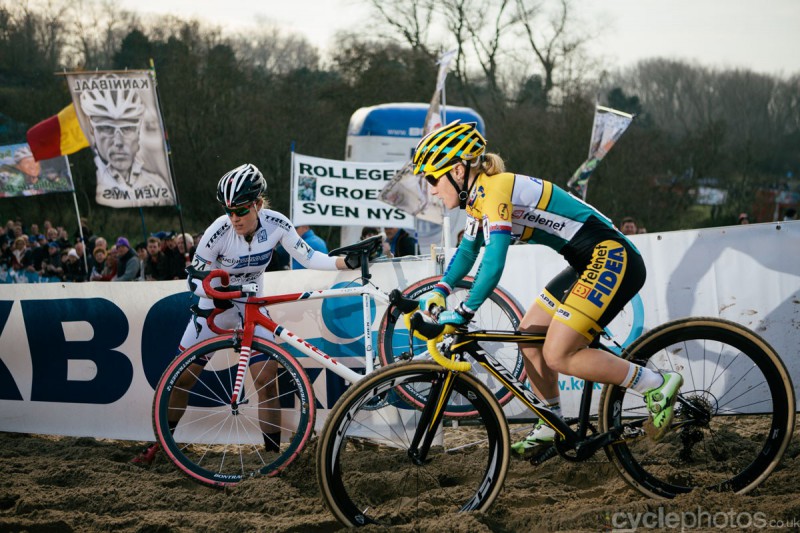 More women are getting on bicycles, loving it, making friends, and becoming a part of the cycling community.  Somewhere in between road cycling and mountain biking is a super rad type of biking known as cyclocross.  Cyclocross provides an environment where undoubtedly you will fall in the sand pit, slip in the mud, get a hand up of bacon when going through the feed zone and get a really hard workout.  It is a cycling event where the worst conditions are favored, when wearing costumes is allowed, and where everyone is super encouraging of everyone, including women’s cyclocross where more and more women are joining the fun.

Cyclocross is a type of bicycle race that occurs in a circuit of about 2.5-3.5km and consists of off-camber tracks on grass and dirt, sand pits, tight corners, stairs, and barriers.  The races take place in city parks and organizers line up tape and obstacles to create the courses.   The cyclocross season begins in September and runs through January, so be prepared to race in some cold, wet, muddy, and occasionally snowy conditions!  Women’s races typically last 30 to 45 minutes and depending on the conditions, a lap will take anywhere from 8-12 minutes, while the men complete laps faster they just do a few more of them.

Any woman can get involved in women’s cyclocross!  Whether you are a beginner cyclist or experienced racer, you can find a niche in cyclocross.  Many women enter the sport from road cycling as the road season wraps up just as the cross season begins.  While their fitness translates seamlessly, many roadies learn they need to improve their bike handling skills while on the cross course.  Typically the women, who enter cyclocross from mountain biking pick up the sport faster than the roadies since they spend more time on the technical aspect of the sport such as: lines to take in and out of corners, wheel overlap, and mounting and dismounting.  Joining a cycling club or getting a few girlfriends together to practice and go to the races with is often the easiest way to get into cross, and is sure to provide the most fun.

Women’s cyclocross is growing each year and with that grows the number of races.  Around the country bike clubs, teams, and shops hold cyclocross races.  Lots of cities have a race series where events move around each weekend.  So many groups are jumping on the cyclocross bandwagon that most are also providing cross clinics on weeknights for people to come and practice barrier jumping, mounts and dismounts, running with the bike, and just getting better at cornering and riding the technical bits.

The Motherland of Cross – Belgium

As with most sports, there is a top level. In cyclocross, the epicenter is the country of Belgium for both the men and women.  Europe in general is more keen on following professional cycling than North America is, but specifically there is a huge fan base for cyclocross in Belgium.  With races occurring several times a week, hundreds to thousands of spectators appear to indulge in plenty of beer drinking and heckling.  Belgians are so dominant in cyclocross that in the 2015-2016 season both top male and female racers on the World Cup circuit were Belgian. A great way to further enjoy the sport as well as to learn a thing or two while further being motivated to ride your bike, you can watch ‘cross races week in and week out from the end of September through February. Websites such as cyclingfans.com often have links to where you can watch.

Cyclocross is somewhat of a blend of both mountain and road biking, and for that reason a lot of the equipment can transfer among the three sports

The Why of Women’s Cyclocross

Women’s cyclocross is a sport that brings women cyclists of all backgrounds, ages, and abilities together. With its blend of fitness, finesse, power, and its uninhibited atmosphere, it is the perfect blend of awesome. So in short; get a cross bike, find some friends or a group to ride with, seek out a race, and have some fun!