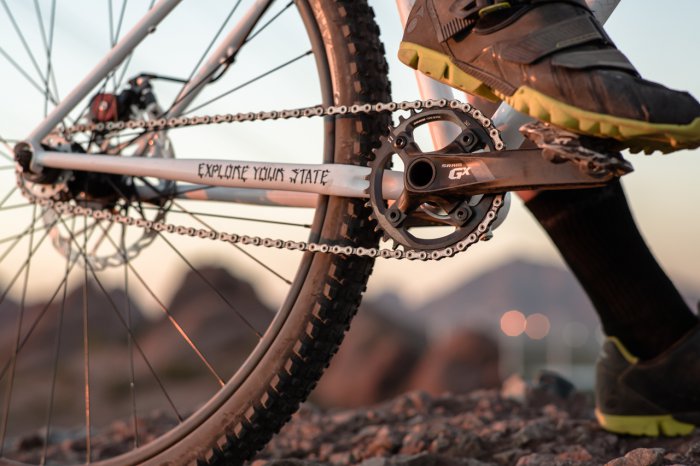 The drivetrain of a single speed mountain bike consists of a crank, one chainring, the chain and one cog. That is all; there are no derailleurs, multiple cogs or chainrings, cables or shifters. Skipping all of those parts saves weight and maintenance. The bike will be cheaper than a geared alternative, with perhaps a slightly more tricked out cockpit and wheel/tire setup.

While the bike is more simple, it takes a bit more forethought to pedal over obstacles that you could tackle with a geared bike. Gears make bikes faster and more efficient. And sometimes you will come to a section of trail that will be a pure leg-breaker, perhaps bordering on knee-breaker if you get bogged down enough in your single gear (a single gear, which on the same ride could be both radically undergeared and overgeared depending on terrain). The bottom line is that your riding style will change.

A single speed mountain bike should be quieter. As long as you tension the chain properly, there should not be any chain slap as you roll over rough terrain. There is no whirring of the chain through the derailleur pulleys or rubbing on the front derailleur. It could be a nicer nature experience, unless your deep breathing drowns everything else out. That is what you are out there for anyway, right?

When you are after simplicity and the challenge of human versus terrain, a single speed mountain bike can fit the bill. You will end up thinking more about tackling the terrain and less on the equipment.

By leaving off chainrings, shifters, cables and cogs you will save some weight. It may be easier to move the bike around maneuvering on a trail, but the thousand or so grams you leave behind are not significant in the overall rider/bike package. It would be easier to shave that weight from your body than to build an entirely new bike and you would come out more fit on the other side. Of course this depends on if you have the weight to lose or you are already at the razors edge for fitness and body composition.

Have you ever ridden in the snow or mud and had your cassette almost entirely block up? This will not happen on a single speed mountain bike. Because the chain is running on one chainring and one cog, it keeps anything from building up on the drivetrain, keeping you moving forward.

Cleanup after a ride is also easier. There are fewer moving parts to pick grime out of and then lubricate. When the drivetrain does wear out after riding in all of the slop, it is cheaper to replace. If you want to spend more time riding and less time working on your bike, a single speed mountain bike might be the ride for you.

With only having one gear, most of the time you are going to be either over-geared or under-geared. This means you will spin out easily on fast trail or dirt roads or when the going gets steep, you simply have to get off and walk. Both are part of single speed mountain biking but the trails you choose will be more enjoyable if you have the right gear for it. Trails that are more flat and leave you at roughly the same speed are great for the single speed mountain bike. The flip side of this is trails that are up and down but the climbs aren’t so steep that you have to get off and walk. Your cadence is slower but you can still manage. And then coming down the descent on the other side, you’re not pedaling. Just freewheeling, ripping the descent.