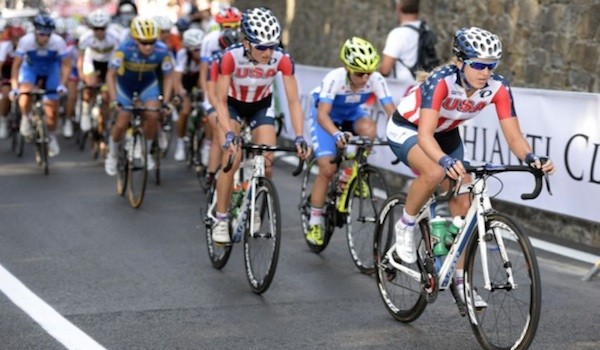 The Road Cycling World Championships happen once a year, most of the time, in Europe. The World Championships are like the Olympics where countries send their best riders as opposed to them racing for their normal trade teams. This brings an Olympic like quality event dedicated just to road cycling that is attended by the very best. The multitude of events also brings an Olympic feel where there is more than just one event to check out and watch unlike that of the Tour de France or other big races.

Cycling in Europe is something that is ingrained in the culture, particularly in some places such as Belgium or Holland. In these countries, many of the fans and spectators aren’t actually cyclists themselves whereas in the US, many people that attend the big races are into cycling one way or another. The number of high level races in North America has been steadily increasing over the years as has the size of the sport in general. Events like the World Championships in Richmond are not only huge for the sport in general in the country, but also huge in the fact that it is helping to further grow cycling in the culture.

This is only the second time in history that the Road Cycling World Championships have been hosted by the United States. The first time was in 1986 in Colorado Springs, Colorado. Canada hosted Worlds twice; once in 1974 in Montreal and again in 2003 in Hamilton, Ontario, so the highest level events have been few and far between in North America. In 2013, the US hosted the Cyclocross World Championships in Louisville, Kentucky which was the first time that the event was held outside of Europe.

Along with the World Championships mostly being held in Europe, the majority of the top level professional races are also held in Europe. This creates a home field advantage for the majority of the peloton which are from Europe.  Even though most pro’s that are foreign to Europe reside there during the season, racing in a foreign country with foreign food, and a foreign language no matter how seasoned, will never feel like the comforts of home.

Travel and time zone differences also add up to another hurdle that “Euro’s” always complain of when coming to the States or Canada. North American riders now have that advantage, particularly the ones living close by to Richmond. Along with that, normally when racing in a foreign country, cheers are in foreign languages and normally for the local teams and riders. This time in Richmond, all those fans and cheers will be for American riders which gives that little bit of an extra push and motivation.

Benefits to a Cycling Culture

Cycling is engrained into European culture for a number of reasons. The history of the racing there along with how often there are races to watch and see in person are the big two. This gets a large number of people as well as kids exposed to the sport to have the chance to get into it.

Cycling is something that kids can do in many European countries as a sport just like Little League Baseball or Soccer. With such a high level cycling event in Richmond, you can bet that in the coming months and years, cycling will see a rise in the area. Not only in riding as a sport, but commuting and riding for leisure as well.

In many places around the US, cycling is not seen as a sport or as a way to get around. This will extend past Richmond as well with media coverage being highlighted across the country. The more that high level cycling events are held on TV, the higher the number of people watching the sport and in turn hopefully become inspired by what they see, particularly it not being a sport held off in some foreign country but right here in the United States.

The Thrilling Events in Person and on TV

Seeing any professional event in person is like none other. In cycling, you can’t compare the wind, noise, and rush of a peloton passing by along with its entourage of vehicles. Fortunately if you can’t make it to Richmond, watching on TV can still be great as you can see the entire race as opposed to only seeing it go by in one location. You also get the benefit of getting play-by-play commentary especially if you don’t always know what’s going on.

The team time trial is a race against the clock that is competed by trade teams oddly enough. It is a newer event that has only been around in its current form since 2012. Before 1995 however it was competed by nations but was done away with.

The individual race against the clock is also exciting to watch particularly if you have a certain rider or riders you are cheering for. Despite the bit less excitement than the team time trial or the road race, you have the chance to see each rider individually over the course of several hours as opposed to just seeing the riders go by in more of a blur.

The road events are the feature races of the World Championships.  They are classified into a number of categories with Men’s and Women’s, along with classifications of Elite, Under 23, and Junior. The feature event is the Men’s Elite which is held on the last day of the week-long event. In any World Championship the course is made to showcase a challenging and exciting course not only to race but also to watch. In Richmond they have done an incredible job of this including a twisty, cobbled climb up through Libby Park that will not only be interesting for the riders to ride but also to watch.

It’s exciting when any bike race comes to your town or country but when it’s the World Championships it’s very exciting. The best in the world will be there and American’s and Canadians alike have great shots at doing well in all events. The scope of an event this large will have a profound impact on the local community as well as cycling across the country as cycling continues to become more mainstream. Wherever you are, check it out, and get others interested as well, even if they’re not cyclists. It’s a pretty cool race and sport after all.

More information about the Road Cycling World Championships can be found on: www.richmond2015.com