Why is the Front Brake More Powerful? 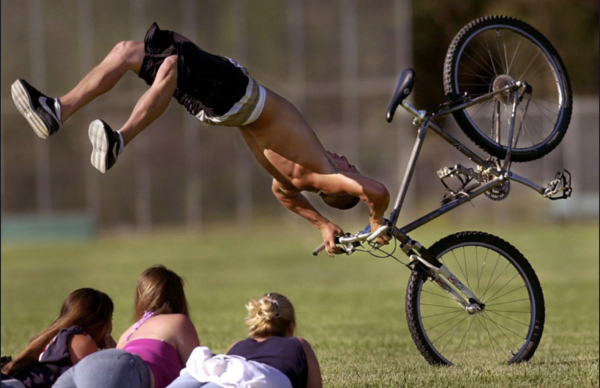 Most of us don’t spend a ton of time thinking about braking. Squeeze brake lever. Stop. Not too hard, right? I was reminded in a recent conversation though, that not everyone fully understands what has to happen to bring your bike to a nice, safe, stop. I was about to head home after work, when, walking over to the bike racks, I noticed an older fellow and his son taking a good look at my bike as they were getting ready to leave. I had a feeling I was going to get some sort of comment about it when I arrived, and I was right. This was how our conversation started off:

“Well, yea,” I replied “if you are gonna have one brake, you want it on the front”

This is a misconception I’ve heard more than once, so I want to explain why, though my friend wasn’t exactly wrong, you would never want just a back brake instead of a front. If you are thinking ‘I’ll never have just one brake, so this doesn’t matter’, the implications of this are still very important with the normal allotment of two brakes – so read on!

The Physics of Braking

First, some basic bicycle physics. The braking on a bicycle is dependent on the friction between your tires and the ground and the friction between the brake pads and rim (or brake disc, if your ride is suitably equipped). Almost all modern brakes have sufficient power to exert enough friction on the rim (or disc) to completely lock the wheel up at moderate speeds. The ability to stop the rim from moving around isn’t a limiting factor in braking, generally. What is limiting is the friction between the tire and the ground. Why does this matter? Let’s think about two extreme cases – stopping using a rear brake only, or a front brake only.

Applying a rear brake means that your only source of braking power is the friction between the rear wheel and the ground. How much friction there is is dependant on the downward force pushing the rubber into the pavement which in this case, is only your body weight (actually only a fraction of your body weight, since the front wheel is taking some weight as well). It is pretty easy to lock out the wheel and skid the tire (as anyone who rode a bike with a coaster brake as a kid can attest to), which isn’t good. You lose a degree of control, and you lose friction (think about ABS brakes on a car) so it takes longer to stop.

With a front brake, your braking power comes from the friction between the front wheel and the ground. This point is in front of your center of mass, which means that as you apply the brakes, the weight of you and your bike acts like a lever, pushing the tire down into the pavement, increasing the friction. Brake too much and yes, you can lock up the tire and flip. But that additional downward force means you have more friction between your tire and the ground, meaning you stop faster. If you do the math, the fastest way to stop a bicycle is to apply the front brake to the point where the back tire is just about to lift off the ground.

You can actually go out and test these two theories yourself. Find a safe, open space like a parking lot, and try braking from 10-15 mph – the first time using just your front brake, the next time using the back. I guarantee you will stop faster using the front. Next, try increasing your speed a bit, and stopping as fast as you can with just the front brake. It will take a bit of practice to find that point when your rear tire is about to come off the ground, but you will be surprised as how quickly you can stop when you get the hang of it! Now go off and spread the gospel!