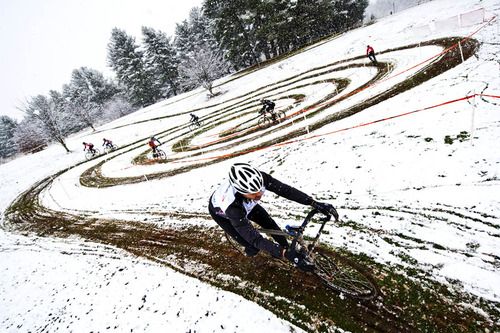 An old cycling adage states to “keep riding until you see black spots — and then keep riding until they go away”. Were the early Tour de France riders tougher than today’s contemporary cyclist? Not really. But is lightheadeness something to be concerned about when cycling? The fact is, almost everyone gets dizzy while cycling at some point. You get dizzy when you stand up too fast or when an unexpected spin of the head happens. There are a few common denominators that make you dizzy while cycling.

You probably don’t have a brain tumor if you get dizzy while cycling.  Just because you get dizzy doesn’t mean there is a major problem. But dizziness is not something to discredit either– especially if it’s chronic, debilitating, or that it feels like you can’t remain on the bike. If this is the case, get an appointment with a doctor as soon as possible. You might have a condition known as vertigo which is often triggered by a simple change in the position of your head.

If you choose to get a checkup be patient. The cause of dizziness while cycling is inherently hard to diagnose, even under a doctors care, because dizziness can be the result of a plethora of conditions requiring extensive, expensive testing. The doctors will likely look at the the most common causes of dizziness which includes dehydration, low blood sugar levels, overexertion, inner ear issues, or medications.

Dizziness may just be a sign that you’re dehydrated so make sure you drink before and throughout your ride to replace any fluids you sweat out. The mechanics of why dehydration (or anything else for that matter) causes you to become dizzy while cycling are best left explained by a medical professional and some will simply diagnose it as heat exhaustion.

It could also be that you’ve taxed your system. Intense use of big muscles that are not accustomed to what you are making them do with a cardiovascular system that isn’t quite up to the task yet results in an increased stress not only on your muscles but also the brain as it too needs oxygen delivered and carbon dioxide cleared. It’s great to push yourself a little but it’s not wise to go so hard that your head spins. Try easing off a bit as you feel the dizziness begin to initiate to see if that solves the problem.

Another cause of that dizzy while cycling feeling might be hypoglycemia; a condition where blood glucose (sugar) levels are too low. Hypoglycemia occurs when your body’s blood sugar is used up too quickly, when glucose is released into the blood stream too slowly, or when too much insulin is released into the bloodstream. Hypoglycemia is a common occurrence in people who have diabetes; however, it can happen to non-diabetics as well if not enough fuel (food) is consumed prior to exertion or exercise.

Prior to cycling, eat either a small meal or a hearty snack containing lean protein, a small amount of healthy fat, and complex carbohydrates to help prevent hypoglycemia. Avoid instant sugars. It is important to treat hypoglycemia immediately by consuming food high in carbohydrates/sugar such as orange juice or bread.

Out of the Saddle

If you are prone to light headedness or dizziness when you stand on the pedals, then take a few deep breaths before you get out of the saddle.

You might be dizzy due to an inner ear infection or imbalance, prescribed medications like sedatives, tranquilizers, anti-seizure drugs, or blood pressure stabilizers. Check this one out with your doctor and make adjustments if needed.

Getting dizzy while cycling could be because your body’s demand for oxygen and the disposal of carbon dioxide has exceeded your capacity. Once you exceed peak capacity, oxygen levels drop and CO2 levels increase which results in light headedness. The lack of oxygen to the brain theory is questionable though because the brain is typically the last organ to get cut off from oxygen and in theory anyway, you typically notice other symptoms before dizziness begins to occur.

If you feel that your dizziness is somehow related to oxygen it could be that you’re suffering from iron-deficient anemia. It’s a condition where your red blood cells have less hemoglobin than normal. Hemoglobin is an iron-rich protein in red blood cells that helps the cells carry oxygen from the lungs to the rest of the body.

Don’t Take Anything For Granted

The reliability of online diagnoses for getting dizzy while cycling is right up there with the accuracy of astrological predictions. If you have any concerns about dizziness while cycling, get a checkup by a health professional. Simple blood tests can reveal or rule out dizziness problems in most cases.