There are many benefits to both cycling and running and they can often be used together when you train. However, if you’re going to pick between running and biking there are several reasons why biking is the better choice. Here’s a couple of facts why cycling is better than running. 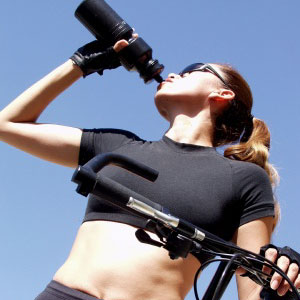 Cycling and running work pretty much the same muscles: the hamstrings, quads, glutes, and calves. Proper running form uses the same arm muscles as proper cycling form as well. These arm muscles are primarily the biceps brachii. However, cycling is less damaging to all these muscles over time.

Running is not something that can be done forever and ever. Depending on your natural gait the heel of your foot or the forefoot continuously hit the ground, sending shock waves up into your ankle, knee, and hip joints. Normally, the small muscles around these joints will act as stabilizers and you’ll barely feel the impact but over time these muscles can become damaged or worn out. The result is usually an injury that you cannot come back from such as a severe case of Achilles tendinitis, a torn ACL, or a severe case of runner’s knee.

Cycling on the other hand is a no impact sport. The act of pedaling does not wear out those small, stabilizing muscles nearly as much as running. There may not be any wear or tear at all depending on the type of biker you are. Even cyclists who engage in the most strenuous training regimens are capable of doing some cycling later on in life even if it isn’t as difficult as what they used to do when their muscles were young. This is not the case for runners.

Running is a more full body workout than cycling which may sound like a good thing but does not always end up being one. This is because that running is a full impact sport. So not only can you hurt your lower body, you can have injuries in your upper body as well. These injuries are commonly back and neck pain.

Cycling on the other hand is a targeted exercise. It’s your leg and hip muscles that do 80% of the work. Your core and your arms do the rest. This is why cyclists tend to have very muscular thighs, firm butts, and small waistlines. Their upper body muscles usually come from other forms of exercise.

So why is cycling better than running? The simple answer is that, once again, cycling’s targeted exercise simply leads to less injury. If you’re looking for an exercise regimen that will get and keep you in shape for a long period of time (we’re talking many decades here, people) then cycling is much better. Running eventually wears the body down and the more running you do, the more likely your body will become worn down quickly. If you cycle correctly, you can still be cycling when you’re old and gray.