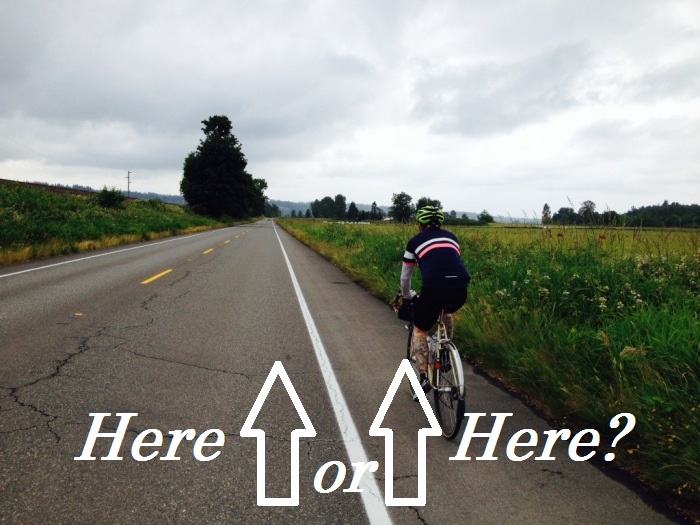 Riding a bike in the middle of the lane on one road could get you killed while riding in the same spot on a different type of road could keep you alive. Knowing where to ride a bike on the road with differing road and traffic situations is a must know for bike riders of any level.

Which Side Of The  Road Should You Ride On?

You should always, always, always ride with traffic, never against it. This means on the right-hand side of the road in the majority of countries in the world. Riding against traffic puts you and the vehicle in greater danger as there is a much greater difference in speed as two object approaching each other will meet much quicker than two objects traveling in the same direction at the general speed of bicycles and vehicles. This reduces the time a driver has to react as well as a cyclist. Also, if a collision were to occur, it would be much worse head-on than if both objects were traveling in the same direction. Also, navigating intersections is much easier and safer when taking the same path as a vehicle.

Where On The Shoulder and When?

Now that you know roughly where to ride a bike on the road, how far to the right should you ride? This depends upon the road and the traffic. Being in one place on a certain road will keep you safe while that same place on another can be very dangerous.

Right Of The White Line

If a road has a lot of traffic, more than ten or so cars passing in a minute, you should ride on the right side of the white line. This is because when vehicles are behind one another they often can’t see past the vehicle ahead of them. If a rider were to ride further into the lane to force the vehicle to move over into the other lane to pass, it could create a more dangerous situation with the potential for a head-on collision. Additionally, as the vehicle moves over, the vehicle behind may not have time/be paying close enough attention to slide over around you resulting in being rear-ended. Staying to the right of the white line avoids this. While being out of the travel lane, you still want to glance over your shoulder to make sure no drivers are texting and drifting over to hit you.

Left Of The White Line

When there is less traffic than described above, you will want to ride just to the left of the white line by one to six inches. This places you in the field of vision of the driver as they may not be looking down the side of the road to see if a cyclist is there. This then forces them to slide over and around you while also making sure there is no traffic coming in the opposing direction. As the vehicle begins to pass you, you should then slide to the right of the white line to give even more space for them to pass.

If There Is No Line

On many roads there is no white line. In this situation you should ride roughly on the right side of the right most tire track when there is little traffic. With more traffic you should ride further to the right where traffic can pass you safely without hitting you while you are still on the road.

Where To Ride A Bike On The Road When There Is No Shoulder?

In many places there isn’t a shoulder wide enough to safely accommodate cyclists while vehicles pass. These roads are often built just wide enough for two vehicles to pass and that’s it. To the right of this is a ditch, grass, woods, you name it. Whether there is little or a lot of traffic you need to ride on the right side of the right most tire track. This will force the vehicles behind you to slow and move into the other lane to pass when there is no opposing traffic. If there is opposing traffic or a corner that they can’t see through, they have to wait behind you as the lane is not big enough accommodate the both of you. In some areas (particularly rural, low cyclist populated areas) drivers will get mad at you but this is the safest option for both you and the vehicle. In this situation you must keep an eye on vehicles approaching from behind and if they don’t see you or attempt to squeeze by anyway, you need to hightail it off the road regardless of what’s there. Crashing on your own will always turn out better than being hit by a car.

When Turning Where Do You Go?

As stressful as knowing where to ride a bike on the road can be, intersections can be just as stressful if you don’t where to go and when. The key is to approach them exactly as you would as a vehicle. This means that when you approach a traffic light and want to turn left, begin to slide left into the lane before the intersection and then into the turning lane if there is one. If you’re turning right, you can just stay to the right and proceed when clear of traffic from the other directions.