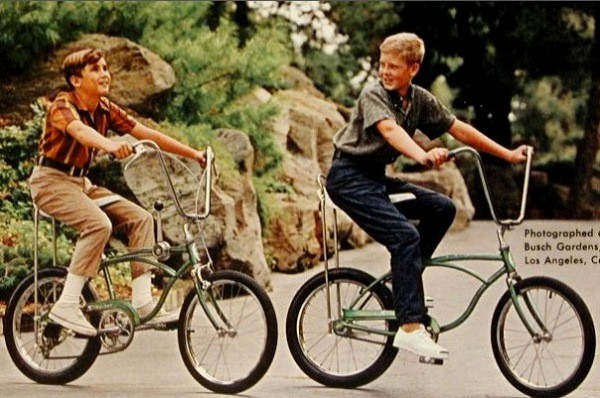 The inventor of the Stingray bike, Al Fritz, passed away recently. Probably no single bike sold faster and created more buzz than the Stingray. The Schwinn company produced the bike between 1963 and 1983 and sold over 40,000 Sting-Rays in 1963 alone. They would have sold more if the company hadn’t run out of 20-inch tires. But where did the Stingray bike go? Do you remember them?

“Every single BMX bike on the track and trails can trace it’s roots directly to the first Stingray built by Al Fritz in the winter of 1963.” said USA-BMX magazine.” After the success of the Stingray bike, Al Fritz went on to become vice president of Schwinn Bicycles and was instrumental in developing Schwinn’s first ten-speed road bikes.

The Sting-Ray was conceived when Fritz traveled to California where kids were modifying bikes to look like suped-up, chopper-style motorcycles. Fritz returned to Schwinn’s Chicago headquarters with the concept. When he presented the new design to Schwinn, they though it was a silly idea. Fortunately for Schwinn, Fritz talked them into building it.

The Stingray bike represented freedom. It was rebellious. It was status and a way of life. Think of the Stingray as a low riding BMX with ape-hanger handlebars and a banana/bucket seat. It was the first “muscle bike” and was in fact likened to the spirit – if not the power – of a Chevelle SS 396.

A gear shifter mounted on the top tube was one of the defining features of the high-end Stingrays. Schwinn called it the Stik-Shift model. With the Detroit muscle-car race at full throttle, Schwinn took it a step further in 1968 and issued the Hemi of Sting-Rays — the Krate. A 16-inch front wheel on a springer fork, 20-inch rear wheel with a wide slick tire and a chrome “sissy” bar mounted on shock absorbers gave the Krate the stance of a top fuel dragster. Just to ensure no one missed the point, advertisers depicted the bike on a drag strip.

Not Just For Kids

As the style developed though so did the weight. It took a lot of effort for a child to motivate the 50lb mass of the high-end Stingray. The price tag was hefty too with the five-speed models starting at $90 in the US – or roughly $600 in today’s dollars. The Krate was for cyclists who were serious about their rides.

Kids typically bought the stripped down Stingrays that were cheaper and lighter. Or your parents might have bought you one of the many competitors’ bikes, such as Huffy’s Penguin Dragster, Rail or Slingshot, a Rollfast Skoot, Sears Screamer or from Britain, the Raleigh Chopper.

An original Krate could be worth $1,400, according to Stephen Komarinetz, a Sting-Ray collector in Uncasville, Connecticut. If you can get your hands on one, an original, rare 1971 Grey Ghost Stingray will fetch upwards of $4,000. Bidding on Ebay has become a competitive sport for collectors of the Grey Ghost and other original Stingrays.

Stingray restoration is alive and well in the online community with ample support. One well-known source of Stingray parts such as refurbished seats and other pieces can be obtained from Pete Aronsen, whose Hyper-Formance company in Arizona supplies Schwinn Sting-Ray and Krate parts, with fenders, tires, and handgrips coming from Chinese-built Schwinn Krate models. If originality is important to you, it should be noted that a market for counterfeit Krates has emerged and collectors are cautioned.

You might have thought that the contemporary mountain bike was innovative, but the Stingray had full-suspension and disc brakes options about a decade or more before they were placed on a mountain bike. Also referred to as “saddle struts” on the rear, and a coil spring or “springer front”, the Stingray was probably the first real full-suspension bike. In fact, the options were almost unlimited.
Here’s a breakdown of the Different Models:

The chopper style handlebars and the banana seats ARE cycling for cyclists born in the 1970’s but why they disappeared is a mystery. If you’ve never lifted a wheely before in your life, the Stingray can hold one for blocks. The coaster brake can be locked up and because you’re low to the ground and the seat is so versatile, you could skid sideways safely on almost any surface. They were reliable and could do distances. They had it all.

The Spirit of Americana

Today’s bikes are targeted for each discipline whether it be dirt track BMX, mountain bikes, or road bikes. The performance of each type is superior to the Stingray, but nothing combined the spirit of cycling or brought more bikers together than the iconic Stingray. If you can get your hands on one, you have a real piece of American history.