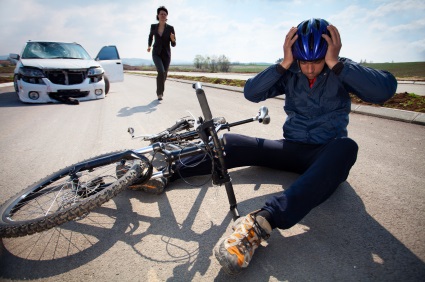 Being in a bike crash can be a terrifying, confusing experience. There are things that need your attention immediately, and things that require even closer attention after a bike crash, especially if your crash involves a vehicle.

After a Bike Crash – Get Out of the Road

If you are able to move and are in a risky spot such as the middle of the road, make some attempt to get yourself to safety. Cars don’t notice most cyclists when they’re upright; don’t expect them to see you on the ground after a bike crash. If you’re unable to move, you are injured or it’s otherwise unwise to move, call for help from others — if anyone is out there.

You could be dazed and confused after a crash. Don’t immediately jump to your feet without first checking for broken bones or blood. You could have injuries that you can’t feel such as a concussion or fractured vertebrae. If there’s traffic bearing down on you, crawl or drag yourself out of traffic. Do whatever it takes to get to safety.

If you’re all alone and have a bike crash, your mental state may not be apparent to you. Do you know your name? Do you know where you are? Do you know what day it is? If you’re unsure about any of these questions, check your helmet for damage. If it’s cracked or you’re confused, call for help immediately. If it’s someone else who has crashed, ask them the questions. This link will give you more insight into concussions.

If you’re body and mind seem to be in working order, stand up slowly. If you don’t crumple back down to the ground and can stand without pain, you may not be seriously injured.

Lean on Your Bike

Some people who are significantly injured do manage to stand up so the next limiting factor is the ability to support your torso by placing your hands on the bars. With a broken collarbone you might get up with pain, but you’ll have a hard time supporting yourself on the bars. Walk around a bit. Make a deliberate, systematic check to make sure everything is still on the bike —  lights, water bottles, repair kit, etc.

Make sure your bike is properly inspected. Carbon fiber is especially troublesome, but a hairline crack in any material might be subsequently catastrophe.  Check to see if your seat or handlebars are tweaked in a different direction. Give the wheels a spin to see if you’ve bent a wheel.

Grasp the bike and attempt to lift it off the ground. If you can lift your bike without too much pain, it’s likely that you haven’t broken any bones. If you feel like getting back on your bike, and no serious injury or damage has been done, ride away slowly. If you or your bike has sustained damage, or other cyclists, pedestrians or cars are involved,  you must take additional steps to protect yourself.

When Others are Involved

It’s one thing to be in a bike crash by yourself on a remote stretch of road or trail. But when others are involved, a car hit you for example, the post bike crash checklist is longer and very important. Gather some facts and evidence.

In the event that you’re injured, or think you might be injured, call 911 immediately. If anyone asks you if you are OK, say, “I’m not sure,” because you don’t really know if you’re OK. Some medical issues take days or weeks to present themselves. Admitting that you’re fine can cause problems in a civil or criminal lawsuit. Do not say you are OK to whomever was involved in your crash, the police, or medical personnel. You are not qualified to say you are OK.

If you’ve been in a collision with another road user and decline immediate medical care, exchange contact details – even if you don’t think you’ll need them. Cyclists are often worried about medical bills if they are involved in a crash with motor vehicle.  The truth is, if you’re involved in a crash with a motor vehicle, and you are injured, the vehicle’s no-fault insurance coverage should provide benefits for your medical expenses and lost wages. Don’t be afraid to go to a hospital because you don’t have health insurance. If you secured valid auto insurance from the driver, the expenses should be covered.

One person’s word against the other isn’t an ideal courtroom decision maker. Question those who may or may not have witnessed the accident to corroborate your story. Most cyclists are carrying a camera phone these days. Take pictures. A few quick shots of the scene might come in handy later, especially if the circumstances of the accident are disputed. There’s no law against taking pictures in a public space, or of private cars.

If you’ve been in a collision with another party and the police didn’t attend the scene, go and file a police report. Do it as soon as possible, while the crash is still fresh in your mind. Make sure you get a corresponding report number so you can follow up the incident.

If you were injured in the crash, it’s a good idea to contact a competent attorney who is familiar with bicycle crash litigation to assist you in obtaining no-fault benefits.

If you choose to go at it alone, try to have the no-fault benefit application returned to the company as soon as possible, preferably within 30-days. The application should provide a claim number. The claim number should then be given to the hospital, doctor, or anyone else involved in your medical treatment in order to bill the insurance company for your treatment. Try to refrain from giving detailed statements to the insurance company about the bike crash. These statements may be used against you later on.

Preserve your bike crash evidence. Place your helmet or other gear aside to preserve for a possible trial. Don’t give a statement to anyone about the crash.  Insurance companies can be nasty and although they seem friendly, they are not your friends.  Be as brief as possible and do not get into details about the crash.

A bike crash is never a good experience and can test your limits both physically and mentally. Having read this, you will have an idea of what you should do in the event of a crash and not be completely lost as even with knowing what to do from experience, it can still be very trying. The first priority is to make sure that you’re OK and seek medical attention if necessary. Then worry about your bike and all the rest. Safe riding.