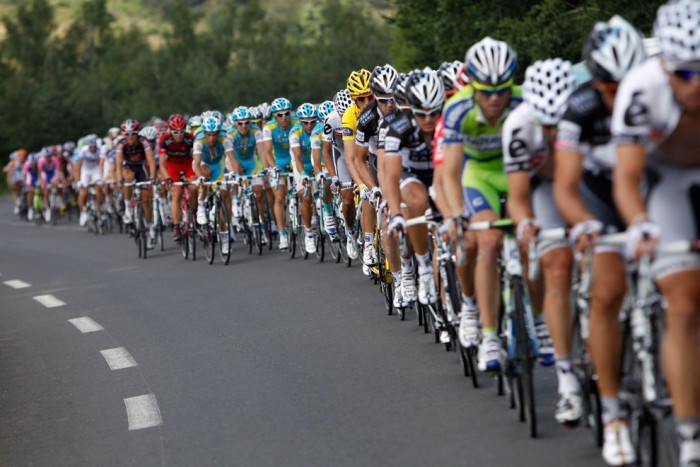 The Tour de France is a three week long bicycle stage race, mostly through France, although it sometimes starts in different countries and may cross French borders during those three weeks. Its first edition was in 1903 as a promotion for a sporting newspaper. That edition was only five stages with only fifteen riders. The Tour has grown to twenty one stages with 198 riders in 2016. But what is the Tour de France on a day-to-day basis? It’s has a lot going on and all at the same time.

So What Is The Tour de France – Some History

Henri Desgrange, the editor of LeVelo started the Tour de France as a publicity stunt in 1903. His newspaper was the second most popular sporting newspaper in France. While neither paper remains, the Tour has survived, only stopping for World Wars One and Two.

Four riders have won the overall classification at the Tour five times each: Jacques Aquetil of France, Eddy Merckx of Belgium, Bernard Hinault of France and Miguel Indurain of Spain. To finish the Tour is quite a feat; to win with such domination makes a rider a legend.

Each day, the riders start a stage. There are a few different kinds of stages:

If the riders cross the finish line in a group, each rider receives the same time. If there is at least a one second gap between one group of riders and another, then the second group will receive a time that is behind that of the first group. On each stage, riders in contention for the overall classification are careful not to let gaps open, especially on flat stages where it is a careless mistake. Those seconds can matter on a later stage. Greg LeMond won the 1989 Tour by eight seconds, the smallest margin in history.

Each stage each day has a start and finish. All riders start together (except for time trials, where the officials track the time of each rider) and finish around the same time, with the riders falling behind receiving a longer time which is how the overall classification is determined.

There are four main classifications:

There are two minor and one informal classification:

While the focus is on individual jerseys and stage wins, cycling in general is a team sport. It is critical in grand tours like the Tour de France (there are two other grand tours – the Giro d’ Italia and the Vuelta a Espana). Without support riders mixed in with leaders on the nine person teams, those leaders would not succeed.

Each team will usually have a rider shooting for a high position in the overall classification. That rider should be able to climb and time trial well. His teammates will protect him with their draft so he uses as little energy as possible. They will also fetch bottles and food for him and wait for him if he needs a bathroom break or has a mechanical failure like a flat tire.

Teams also usually have a sprinter that is trying to win stages. Around the sprinter are other fast riders that try to bring the sprinter to the line as quickly as possible and in good position to out-sprint the other team’s sprinters. These riders are comfortable jockeying for position in the fast finishes and are required to keep their sprinter out of the wind until the last two hundred meters or so of each stage. Other team members that are not on riding are team directors, soigneurs, chefs, and mechanics. Team directors drive the team cars, hand out food and drinks, and generally make tactical decisions for the team. Soigneurs do whatever the riders need off the bike. Things like massage, carrying bags, doing laundry, making race food and drink, as well as feeding during the race from the feed zone. Chefs are obvious and their role is critical – they keep riders properly fueled for the three week race by cooking in the team’s hotel kitchen or often times now in a traveling kitchen that teams travel with. Mechanics take care of each rider’s multiple bikes along with the team’s cars, trucks, and buses. It’s a complicated and huge task that goes on for three weeks and it’s all for the riders to do the best that they can!

There is a lot going on at the Tour de France. If you do not understand early on, it is normal. There are so many nuances that it takes quite a while to grasp a firm understanding of the race. Keep watching and you will get more and more each day.

If you have a specific question about the Tour de France, ask in the comments section below and we’ll get you your answer asap!