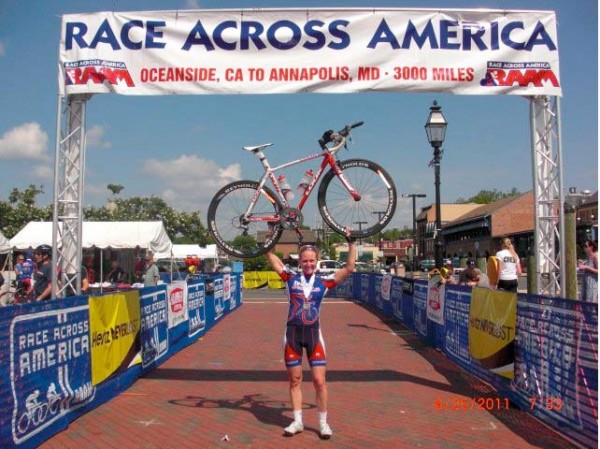 The Race Across America will be celebrating its 35th year in 2016, making it one of the longest continually running bicycle races in America — and you may not have even heard of it. Outside Magazine calls RAAM, “the toughest endurance race in the world”. It’s so tough in fact that only about 200 racers have ever finished it.

It’s a Category by Itself

RAAM shares similarities with other long distance cycling events — but it’s in a category all by itself. For example; there are no rest days or stages. It’s 50 percent longer than the Tour de France and the winner normally completes it in about a third of the time. Those familiar with the RAAM scoff at comparisons to the Tour de France which covers a mere 2,300 miles and allows racers to sleep each night before beginning the next morning.

Riders race through 12 states, traverse the Mojave Desert, the Colorado Rockies, and climb a total of 170,000 feet — or about four times the height of Mount Everest. The 3,000 mile-plus race must be completed in a maximum of 12 days — which averages out to 250-350 miles per day.

The clock runs continuously in the RAAM which means time spent sleeping counts. Winners generally average an hour or less of sleep each day and pedal the rest of the time. Christoph Strasser from Austria, the current record holder, said he had slept fewer than six hours altogether, or about 45 minutes per day.

How it All Began

It Became a Challenge

About every ten years the record would be broken. In the early 1970’s, John Marino realized how fast a bicycle could be ridden across America and the modern movement of trans-national cycling competition had begun. Other riders started challenging Marino and by 1982 a group of these riders decided they were ready for a head-to-head race.

The first year of the RAAM, the race then was called the Great American Bike Race, four riders lined up on the pier in Santa Monica and raced to New York City. Lon Haldeman was the winner. Since that time the race has been run every year, always west to east. The contemporary RAAM now begins in Oceanside, California and finishes in Annapolis, Maryland. With its mid-June start date the RAMM utilizes the summer solstice to provide racers the maximum daylight hours.

The Guinness World Book of Records has this to say about the RAAM; “The fastest crossing of the USA by an individual, as set during the Race Across America (RAAM), was achieved by Christoph Strasser (Austria) in 7 days 15 hours 56 minutes cycling from Oceanside, California, to Annapolis, Maryland, from 10 to 18 June 2014.” In 2013 Christoph Strasser became the first person to cross the USA coast to coast in under 8 days when he finished in 7 days 22 hours 11 minutes. He had previously won the race in 2011, posting a time of 8 days 8 hours 6 minutes. The race route varies each year and Strasser’s average speed of 16.42 mph is also a record in terms of average speed, far better than his 2013 speed of 15.6 mph.”

A good rider needs a competent crew —  ten or eleven members — and an RV. The crews job is to ensure that racers focus all efforts on riding. Part of the job includes pulling up beside him or her to hand them food. A typical daily meal might be a 10,000 calorie-per-day-liquid diet and about 3 gallons of water. Crew members also undress and bath racers during rest times and keep them updated on tactics and weather conditions.

Almost all ultra-endurance events have a low percentage of women, typically less than 20 percent. RAAM officials encourage women to participate and include a category for them. They know that women’s bodies are built for endurance and women have proven they’re capable of very strong performances.

Racer categories include something for everyone, similar to any other cycling event.

It’s not uncommon to encounter gravel patches, rain and hail, slick roads, sandstorms or tornadoes, and traffic jams. Two riders have been killed and one paralyzed in traffic accidents but no challenge is more taxing than the physical side. Cramps, tendinitis, and dehydration are common, especially during the race’s second half.

The biggest challenge racers report is sleep deprivation — that’s why few racers ever finish. Because there are no set stages, the winner of RAAM is typically the rider who can keep riding the longest with the least amount of sleep. Riders suffer extreme sleep deprivation going far and above what most people can imagine. Some racers hallucinate. Racers can be awake, riding, and still hallucinate or experience a reality shift. Crew and race officials are constantly paying attention to a racer’s condition. If officials or crews feel that a racer is past the safety margin they will stop the racer for a sleep break.

Anyone can register for the 2016 RAAM. Once the registration is complete and the entry fee is paid — it’s expensive at just under $4,000 — you’re good to go. The start dates are Tuesday, June 14 for Solo racers and Saturday, June 18 for Team racers. Good luck.