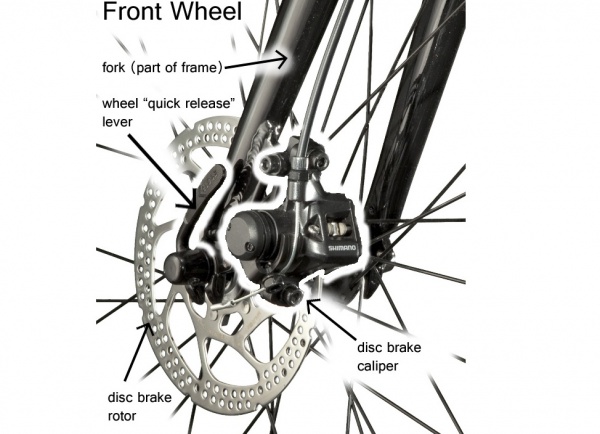 Friction has always been the best way to stop a moving object. Brakes create that friction. Today’s bicycle disc brakes are a modern marvel of refined, contemporary engineering. It provides cyclists with confidence and reliability. Is it for everyone? The answer lies in what you expect from a disc brake and how well you maintain it.

History of the Bicycle Disc Brake

It was the mid 1970’s; the mountain bike had not yet reached any kind of popularity and almost every bike was a road bike with rim brakes. Disc brakes were nothing new though, as they had been on cars for many years. In about 1975, the first disc brakes were placed on a road bike — but it didn’t stay there long.

Rim brakes worked just fine. They were lighter, less expensive, easier to work on and bike shops or sporting goods stores had parts for them. In short, the benefits of the disc brake were outweighed by sacrifices as far as road bikes of the 70’s were concerned. The real need for a disc brake didn’t exist until the introduction of the mountain bike a decade later.

Application of the Disc Brake

The difference is in the application. Mountain bikes rely on disc brakes not because they work better — but because they work better on mountain bikes. Mountain bikers prefer disc brakes for obvious reasons. They can bash their rims out of true and the brakes don’t rub. They can ride through mud, sand or grime and the brakes don’t clog up. There’s no issues with pebbles getting stuck in brake pads and damaging the rims. When it’s wet, the pads still grab almost as if it were dry.

Disc brakes, and especially hydraulic disc brakes, do provide more stopping power than rim brakes. However, a feather-light rim brake has more than enough stopping power for a typical rider on a road bike and disc brakes add weight. Most road riders want to go faster, not stop better.

Rim brakes work by means of generally a rubber compound brake pad, attached to the bike’s frame, positioned directly over the rim of the wheel. When the brake lever is squeezed, the pad pushes against both sides of the rim generating friction to slow the bike down and bring it to a stop.

The  rotor — the shiny disc on a disc brake setup — spins with the wheel. Calipers are attached to the fork and rear stays of the bike and are equipped with the brake pads. When the brakes are applied, the calipers squeeze the pads against the disc instead of the rim.

Mechanical disc brakes rely on cables and housing like a traditional rim brake. Bike companies often use cable actuated disc brakes for simplicity and serviceability. Mechanical disc brakes are much less expensive than hydraulic brakes. The biggest downside is how hard you have to pull the brake lever compared to a hydraulic lever for the same amount of stopping power.

Hydraulic disc brakes don’t use cables but instead use fluid-filled chambers and tubing — similar to the brakes on your car — to push brake fluid. Brake pads are housed in the caliper and are forced into the rotor by hydraulic fluid. Because hydraulic fluid does not compress or flex like a cable, hydraulic systems are considered higher performance than mechanical systems and offer better, seamless stopping power.

Hydraulic disc brakes are more difficult to service than cable actuated disc brakes. If you develop a fluid leak in a hydraulic line or fluid chamber out on a ride, brakes can begin to fade and at some point fail. There’s no way to fix them on the road or trail. Servicing hydraulic brakes can be an expensive procedure that can require a professional if you’re not mechanically inclined to do it yourself.

The disc brake rotor is a crucial part of the system. It must be perfectly flat and straight to work properly. If it’s bent or warped it either will need straightened to not rub on the pads or will need replaced altogether.

When hydraulic brakes feel soft or spongy, it’s usually the result of air in the hydraulic lines. An easy way to test if your lines need bled is to stand your bike upright on the rear wheel and pump the brake levers five to ten times. If the lever starts to pull all the way to the bar, it means that there is air in the line and needs bled. Bleeding a hydraulic system is a routine procedure for removing trapped air from the lines and calipers.

Fluid replacement is required when hydraulic fluid becomes contaminated with dirt and moisture. The fluid might be mineral oil or standard brake fluid; check with the manufacturer for the specific type of fluid to be used. Different types of brake fluid should never be mixed.

Bleeding lines and fluid replacement can be done at home with the proper equipment and know-how. If you’re unsure about it, take it to a professional.

Uneven pad wear is a common reason why you need to adjust your disc brake calipers. It can be done two different ways or a combination of both. If the caliper is obviously crooked, it’s possible to nudge it a bit in either direction by simply loosening the two bolts that hold the caliper to the frame or fork and centering it on the rotor. As your pads wear down, pad adjuster bolts on the caliper move the pads closer to the rotor as needed or at regular intervals.

Bicycle disc brake pads are a consumable item.  They wear out and require replacement. They may last a few seasons or only a few months depending on how you ride and how much. Some mechanics recommend replacing pads when the exposed surface of the pad is thinner than a dime. If pads are allowed to wear too thin they will damage the rotor and it can put you in danger. It can take only a few minutes of exposure from a worn out pad to completely destroy a rotor. In short, inspect your brake pads often and replace when necessary for better performance to save money in the long run and to prevent injury.

To change brake pads, it’s first necessary to remove pressure on hydraulic systems. It’s done on hydraulic brakes by removing the reservoir cap first. Depending on models, a cotter pin is then typically removed from mechanical and hydraulic alike. Some models have additional bolts to loosen. The pads may pop out of the caliper from the top or bottom, and they slip back in the same way.

Mechanical disc brakes have additional barrel adjusters on the cables themselves to take up slack from the cable. Giving them a few turns counterclockwise tightens the cable moving the pads closer to the rotor for better braking.

Give it a Checkup

Proper function of bicycle disc brakes relies on basic things that work together and must be properly adjusted. Have a look at them visually. Spin the wheel. Check the rotor itself for warp and damage. Look for side-to-side wobble. Check to see if the caliper is centered on the rotor. Check pad thickness and caliper position. Sight along the rotor to see how much brake pad you have left. Note how much daylight you have between rotor and pad, and note the thickness of each pad.

Don’t do anything half-assed when working on your bicycle disc brakes. If you decide to tackle it yourself, take your time and do it right. If you don’t feel up to it, get your local shop to do the job for you whether it be bleeding your brakes, adjusting them, or changing pads or cables.