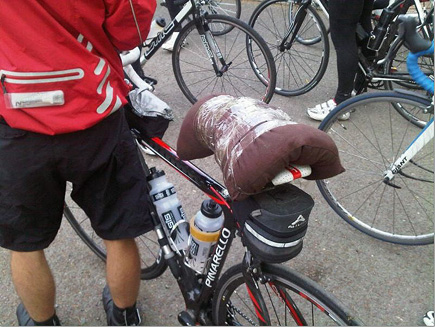 Saddle sores are a curse on cycling. The fiery, burning sensation is like nothing else. It can ruin your ride, prevent you from riding, and remain sore for days after you get off the bike. Also sometimes referred to as friction burns, saddle sores are suffered equally between men and women alike.

Saddle sores strike young and old, male or female, amateur or professional without provocation or distinction. But it doesn’t have to be an issue if prevention and proper aftercare is observed and followed. Don’t let saddle sores keep you off your bike or cause you any unnecessary pain.

There are two types of saddle soreness. The first type is that deep muscle pain that most beginners feel when their butt just isn’t accustomed to the saddle. It’s also an issue for experienced riders when they spend hours and hours in the saddle. This type goes away by itself by simply getting back on the bike, and continuing riding. The second, the most common, is the friction burn or skin irritation that just gets worse and worse if not dealt with. This is the rub that needs attention.

Friction sores can develop into three stages if not properly addressed. The first stage is the simple burn or skin abrasion, and that’s where it typically stops. If not addressed properly though, it gets worse. The second stage is recognized when skin abrasion turns into Folliculitis, which is a skin condition caused by inflammation of hair follicles. It typically occurs in areas of irritation, such as where poor fitting shorts, or a bad seat rubs you raw. The inflamed follicles become infected with bacteria. The  Staphylococcus organism is the most common, peacefully living out it’s life on your skin. That is until it moves deeper into the saddle sore and at some point it changes into the the third stage, which is known as an abscess.

Most common saddle sores remain at stage one, some move to stage two, and even fewer develop into stage three because cyclists typically deal with them before they get that bad. Saddle soreness will never be stopped completely; there are just too many variables but there are things you can do to minimize them:

Some cyclists recommend treating existing saddle sores with an over-the-counter acne gel containing 10-percent benzoyl peroxide. Benzoyle peroxide is a common acne treatment. It’s important to note that the solution does not contain erythromycin, which is an antibiotic.

Some contemporary medical professionals have advised against using antibiotics for minor skin infections such as saddle sores. Antibiotic resistance is a growing concern and considered a problem. If you think it’s bad enough to warrant antibiotics, or if the sore is getting out of control, consult your doctor about antibiotics.

When to Call a Doctor

If the sore is more painful than you think it should be, feels warm to the touch, or is very red and you can see red streaks coming from it, or you’re running a fever — seek immediate medical care. Consult a doctor if the saddle sore hasn’t gotten any better in two weeks or is getting larger.

Even the cleanest, most hygienic pair of shorts will turn into a bacterial nightmare after 8 or 10 hours of riding — less in warmer weather. If you start a ride squeaky clean, you will soon get sweaty and filthy. Even the most comfortable saddle or pair of shorts can rub you the wrong way at some point. Needles to say there isn’t a sure-fire prevention for saddle sores once you start doing long distances.

The Most Common Advice

There are many aspects of chamois cream that people tend to gravitate towards, or stay away from. One of the most obvious is the tingling sensation. Getting that tingling feel reminds you that the cream is working. Things like eucalyptus, menthol, or tea tree oil are added to make your privates tingle. The tingle can be a pleasant cooling sensation as opposed to the fiery burning, searing one. Some chamois creams are tingly, and some are smooth like butter. The choice is yours.

There are many creams out there, some cycling specific, others are generic, everyday products that are marketed differently but consist of the same thing — lanolin.

Lanolin is secretion from sheep wool typically found in most of the products, and it’s probably the most widely used product for cycling. One of the most common,  Lantiseptic was designed, and is still used for baby’s diaper dermatitis. Lantiseptic provides a sticky substance that stay’s put for your multi-hour day in the saddle. Lantiseptics main ingredient is lanolin. And to reference the baby’s needs, Lantiseptic uses only medical-grade lanolin.

Cyclists have long dealt with saddle sores with a broad range of common household products, that seemingly, have nothing to do with cycling, but nonetheless have withstood the test of time. As with any ointment, if you have any objections to using antibiotics, always check the labeling.