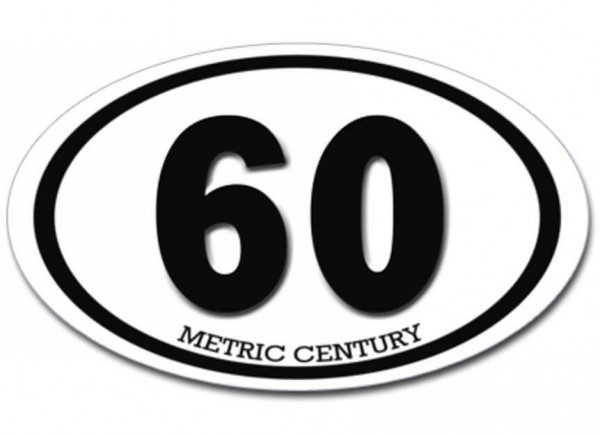 Century riding is a rite of passage for cyclists. The completion of a century ensures your place among cyclists. But if you’re not ready for a full-blown century of 100 miles, there’s an option. The the 100 kilometer metric century, or 62 miles, is well respected among cyclists. It’s an achievement to be proud of.

You’ve seen versions of centuries advertised for charity, pledge or group rides. There are typically options for quarter centuries ( 50 miles) half centuries (50-miles), metric century (62 miles), and the standard century (100 miles). Technically speaking, a true metric century is just over 62-miles when converted from kilometers to miles, but the majority of cyclists refer to metric centuries between 60 and 65-miles.

Sixty miles — 100-kilometers — is just about the perfect distance for your first long-distance cycling challenge. You can claim to have accomplished a metric century with almost as much gusto as a 100-mile century. It gives you the confidence to add the extra 40 miles at a later date, leading up to a full-blown “Imperial” century.

With the colder months there’s no excuse for not preparing for a metric century and depending on where you live, you could easily be ready for a metric centruy in April, weather permitting. Get started now by building your base, watching what you eat, and staying active in cycling.

Endurance is the Objective

Going fast isn’t the objective for your first metric century; endurance is the key. Building endurance allows you to get more out of riding in general. Cyclists who go straight into speed and interval training get fast on the bike but may fail when it comes to distance riding without an adequate base.

If you participate regularly in other aerobic activities, it’s possible to ready yourself for a metric century in less than few months. Start with the metric, and by that time, you’ll know if you’re heading in the right direction if you wish to tackle the full century.

It’s All About The Base

Base training is the foundation upon which you build for a metric century. It should be the single most important part of your training. Many cyclist never reach their full potential because they neglect this critical phase. Building your base is about preparing your body for the effort you will be placing on it when tackling your first metric. A foundation of steady miles allow you to make harder efforts later in the year.

Fitting enough riding in can be a challenge but shorter rides at a steady pace not only help to build your base, but allow you to burn more fat. Short, consistent riding helps to build capillaries that deliver oxygen-rich blood to your muscles. The result is a base that allows you to ride longer. After a few months of riding consistently, you’ll be able to maintain an average speed and heart rate that was unthinkable earlier in the year.

Daily riding is a good place to start, but it’s not always possible to squeeze out a ride after work. Start by reminding yourself that you plan on riding as soon as you get home. Fight the urge to sit down after work, you’ll never get back up. Take off work clothes as soon as you get home. Put on your cycling gear and knock off at least 5 to ten miles, 5 or 6 days a week, with at least one 20 miler or more on the weekend, if not two 20-milers. As you get closer to the metric launch date, bring it up to 30 or 40 miles at least once a weekend. Plan on skipping at least one day a week, but no more than two. Monday is a good day to skip to recover from the longer rides of the weekend.

Stationary bikes are an option for base training in cold, snowy, or wet weather, but stationary bikes can be boring. It’s always better to ride outside when possible. Outdoor riding gives you skills and builds a fitness base you just can’t get on a stationary bike.

During your continuous, everyday rides, break-up easy pedaling with short intervals of harder effort to get your heart rate up. Do it as many times as you are comfortable with, but don’t overdo it. It’s the accumulative hours of steady riding that enhance and build your base, not interval training.

Building an endurance base of steady mileage on the road accomplishes physiological changes in your body. There’s no need to push your heart to its limits. If your heart rate is 65-80% of your maximum, the hardest your heart can beat, for at least 20 minutes, you’re doing fine. The lower intensity pace that you ride at doing base training allows you to train longer.

There’s no magic number for how long a base-building period should last for a metric century. Continue on for four to six weeks, or until you feel you’ve hit a plateau. A good ballpark figure is between 6 and 12 weeks. Start increasing your rides by about ten percent each week until you can do two 30-mile rides on two consecutive days before deciding on a launch date for your first metric.