Cyclists are known for their toned calves, strong thighs and overall cardiovascular fitness. We may be able to output a ton of power into each pedal stroke, but when it comes to flexibility and range of motion, most of us are lacking. This isn’t without cause, and we want to provide the best stretches for cyclists to keep you feeling your best.

Cycling is one of the few activities in which muscles contract concentrically (while shortening), rather than eccentrically (while lengthening). It’s great for our bodies as it’s low impact, but this repetitive motion can cause the muscle fibres to shorten, also known as ‘adaptive shortening.’ This will not only cause an imbalance in your muscles and put you at risk of injury, but it can make maintaining proper posture almost impossible. The best way to combat this is with regular and targeted stretches for cyclists.

Flexibility and range of motion can be an easy thing to ignore. So long as we can keep up on those group rides or stay in the saddle for hours at a time, it can quickly fall off the radar (if it was ever there). However, the range of movement around a joint or multiple joints is actually extremely important for all athletes, and especially for cyclists. As humans we are not built to be in a cycling position for extended periods of time, just as we aren’t built to sit at desk jobs 40 hours a week. This doesn’t mean we need to give either one up, but that we need to take the right steps to ensure it doesn’t have a negative effect on our body. 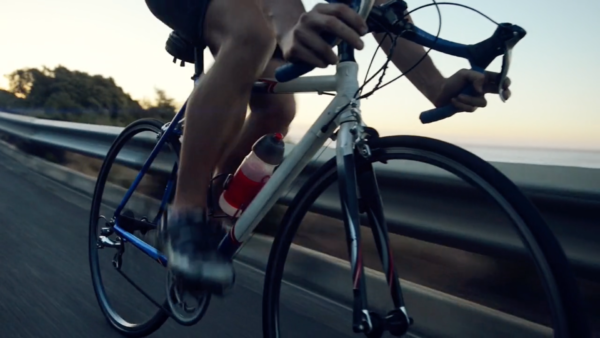 The hunched over, forward leaning position on the bike is known for causing the hip flexors to tighten over time. From there, these short, tight muscles with a limited range of motion can cause an anterior pelvic tilt, and arched lower back and weak core muscles. The domino effect is no fun, so it’s always better to take preventative measures rather than reactive.

The focus should be on maintaining, or probably regaining, a healthy range of motion in the joints. From there, you’ll find you ride more comfortably, efficiently and with better technique.

Why Cyclists Need to Stretch 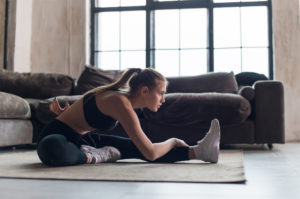 Relaxation – Stretching before and after a workout can give both you and your muscles time to relax. With stress or exhaustion, the muscles will begin to tighten. Stretching can encourage a release of endorphins and leave you feeling encouraged. 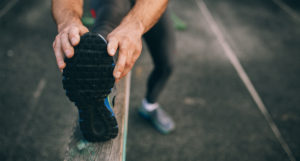 Prevent Tissue Degradation  – Generally speaking, our day to day lives are restricted to certain movements and physical exertion. Over time and with age, the body starts dehydrating and stiffening. On a cellular level, muscle fibres start developing cross-links with parallel fibers making them stick together. Stretching slows this process by stimulating the production of tissue lubricants and pulling the interwoven cellular cross links back into an ordered state.

Flexibility – Your range of motion is the distance parts of you body can move and rotate before causing damage to muscles and tendons. Everyone naturally has a different range of motion, but stretching can help you define what that looks like for you. As cyclists, we have to have the freedom and flexibility to move without resistance or pain.

Injury Prevention – Everything in the body is connected, and as cyclists we demand a lot from our muscles, joints and ligaments. Stretching keeps the connections strong, treating and preventing injury, improving functionality and longevity. We also can’t forget about the muscles and joints that are not used in cycling. On the bike, all movements are in a straight line, with no other plane of movement. So, it’s important to keep this in mind while stretching. Not only do you want to focus on the muscles used, but those that aren’t, as a means of reversing and preventing muscle imbalance.

Better Posture & Aerodynamics – Stretching the right muscles can help correct poor posture both on and off the bike. By lengthening tight muscles that pull areas of the body away from their natural position you can maintain proper posture without the desire to round the back or slouch.

There is no one recipe for optimal flexibity, as that will vary on an individual basis, but there are target areas that will be more or less the same for all cyclists. The areas that become tightened are fairly universal: 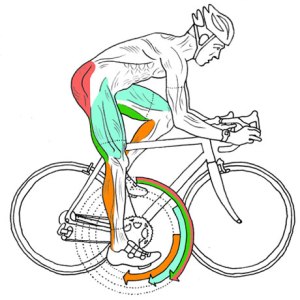 Hip Flexors – The action of cycling involves repeated hip flexion with the hip never full extending, which can cause tightness or even a shortening of the muscle over time. Not only can tight hip flexors cause discomfort in your everyday life, they can also reduce your cycling performance. It can lead to lower back pain and will make it tough to access the glutes (see below).

Hamstrings – Tight hamstrings pull the pelvis back on the saddle, rather than allowing a forward tilt. Also, when they become shortened they don’t allow the involvement of the glutes, which can have a negative effect on how much power you can produce.

Quads – The powerhouse of the pedal stroke, it’s pretty obvious that the quads need some attention.

IT Band – The IT Band stabilizes the knee; if it’s tight it can rub against the knee, become inflamed and lead to knee pain.

Glutes – The glutes are one of the largest and strongest muscles in your body. Leaving them inactive is not only costing you power, but can lead to injury as the hamstring and quads overcompensate. Tight glutes prevent you from achieving an aerodynamic position on the bike. First things first, proper pelvic posture is key. If your front side (anterior side of your hips/hip flexors) are tight you won’t be able to access your glutes completely. Work on keeping your pelvis in a neutral position and remember to keep your core engaged when stretching the glutes.

Lower Back – Another symptom of tightness in other areas, lower back pain most commonly stems from tight hamstrings.

10 of the Best Stretches for Cyclists

After a gentle warm up, complete 4-5 of these stretches, holding each one for 1 minute if you can. If not, start with 30 seconds and build up the time. Ideally cyclists should try to stretch everyday, but 5 days a week will be enough to start experiencing some of the long term benefits.

The half pyramid stretches the hamstrings, inner thighs, lower back and opens the chest.

The knight’s pose targets the hip flexors and the quads.

This classic quad stretch is important for recovery after a ride.

IT Opener (With Strap)

The iliotibial band stabilizes the knee, so this stretch is great to keep it loose and functioning properly.

Focusing on the glutes, the can opener is great for cyclists to help release tension.

For those who suffer lower back pain from cycling, the lower twist targets the bottom of the spine and the glutes.

The figure four is a great multi-target stretch, focussing on the hamstrings and glutes, as well as opening up the hips.

One of the more well-known poses, the downward dog is popular for a reason. It fully stretches the hamstrings, calf muscles, shoulders and lengthens the spine.

Also known as “The King of Hip Openers,” the pigeon stretch works to loosen up tight hip flexors. There is also plenty of room for adaptation in the stretch, so it’s great no matter your level of flexibility.

You don’t need to sign up for daily yoga classes or commit a ton of time to stretching, but even a little bit can go a long way in keeping you injury free and feeling your best. Start with 10 minutes a day of stretches for cyclists, 4-5 times a week and you will start seeing and feeling the results. If you don’t know where to begin, check out Dynamic Cyclist. They have daily, easy to follow stretching videos designed specifically for and by cyclists. Spend less time thinking about how and what to stretch, and more time in the saddle!