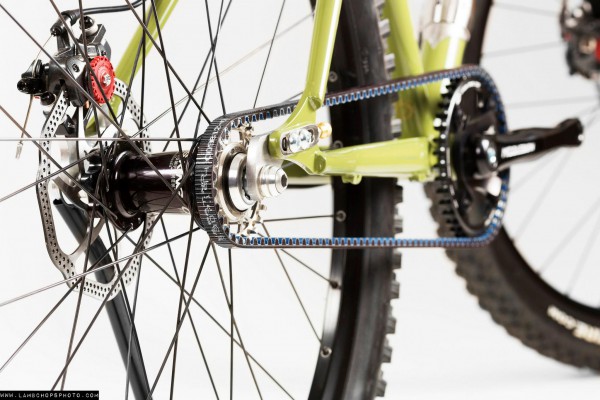 The belt drive bicycle is not a new invention. Motorcycles from the early 1900’s had belt drives. Museums around the world have old motorcycles wearing leather or reinforced rubber belt-drive systems. But as engines developed more power and torque, they needed something more reliable than leather or cheap rubber which lead to the invention of the modern day chain.

The History of The Belt Drive Bicycle

The chain driven motorcycle became the norm with more powerful engines. Belt design however continued to improve over the years, driven largely by applications such as fan belts. With newer rubber and cord formulations, chains were again beginning to be replaced with belts on big cruisers such as the Harley-Davidson.

Why It’s Important to Bicycles

The quietness of a belt is not the only virtue. There’s something to be said for a reduction in drivetrain noise. Belts do not rust, they resist environmental pollutants, and require no lubrication. You’ll also notice a near-instant engagement on a belt drive bike, versus the subtle lag of a chain.

Belts are manufactured differently than chains. Belts are one continuous loop, with an inner carbon-fiber cord layered with polyurethane teeth and a nylon outer coating. They do not have any moving parts like the links and pins of a chain.  This fact alone is enough to ask why they haven’t been on bikes for years.

Belts wear slowly and evenly. The only wear that occurs is between the belt teeth and sprocket teeth. Belt drive systems are reported to last at least twice as long as chain systems and often five to ten times as long. Some cyclist testify that their belts have over 20,000 miles on them — we’re talking single speed bikes for the most part.

It’s been suggested that belt drive bicycles are superior to chain driven bikes. So why haven’t we seen belts replacing the antiquated, noisy, dirty, heavy chain? Well it’s not that simple. Belts can’t flex sideways like a chain. Belts require frame modifications during construction. Belts require internal gearing to provide shifting options. These are just a few of the reasons why belts probably won’t replace chains.

The main disadvantage of a belt is that, unlike chains, they do not take to side flex. This makes it impossible to shift onto different cogs for different gear ratios as the next cog over isn’t in a straight line from the front chainring which would require lateral flex.

Here’s where it begins to get complicated; It’s one thing to break a chain, install it on the bike, and then reattach the links to put the chain back together. But belts cannot be opened like a chain so the frame of the bike must be separated to install the belt. Frames must be built with a separation point somewhere within the drive side rear triangle. Fortunately more and more designers are realizing this fact and are making frames with split points designed into the seatstay or dropout — but these are still relatively uncommon.

So, we’ve solved the problem by inventing bike designs that split in the middle to install a belt. But what about the sideways flex not allowing for gear changes? This problem has also been solved with internal gearing. This means you can have gears in the rear hub that change your gear ratio. Internal gearing generally is limited in the ratios it offers and is also difficult to work on or service.

The use of a belt drive bicycle in competitive road racing, or any road bike in general, is limited by the technology of internal hubs which are uncommon in road bikes. Another reason why we don’t see more of them on road bikes is that belt-drive systems are slightly wider than chain drive. Most roadies prefer the sleeker, more aerodynamic chain drive along with the wider range of gearing options.

Commuting bikes are one of the fastest-growing segments of the bike market. This is where we will likely see more belt drive bicycles. Many companies already have options for a belt drive bicycle particularly for single-speeds as well as some internally geared options. A belt drive bicycle makes for a great commuting option because of their cleanliness and lack of maintenance.

Despite the advantages of a belt drive bicycle, chains continue to dominate the market. They are compatible with the majority of bikes and they can be modified to fit any frame and with any length. Chains make more sense for long distance or touring cyclists offering piece of mind because they are easier to find and replace. The chain is a a relic and belt drives have given it a run for it’s money in some regards but in the general sense of riding and functionality, the conventional chain will be the go to option for the foreseeable future.