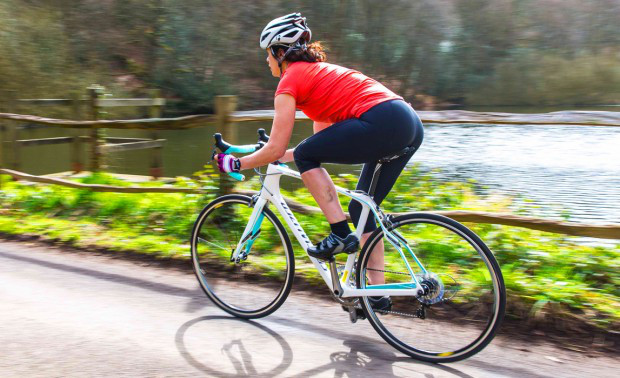 More and more bike manufacturers are developing specifically women’s road bikes to meet the needs and the growing population of female cyclists.  Women have different body geometry than that of men and often require different saddles, different frame designs and smaller handlebars and shallower drops to allow them to  feel most comfortable and in control while riding.  Depending on the goals, experience, and budget a woman has for road cycling, there are various women specific bike models to meet her needs.

The Trek Silque SLX is a mid-range endurance road bike designed for the woman cyclist looking for the utmost comfort while doing long road rides.  The Silque SLX comes complete with an OCLV carbon frame, internal cable routing, Shimano Ultegra components, as well as their unique IsoSpeed decoupler.  The IsoSpeed decoupler is specific to the Trek brand; it is a suspension unit built into the seat post designed to absorb impacts on a bumpy road.  Initially manufactured for racing on cobblestones, the IsoSpeed decoupler is perfect for any woman cyclist who is looking to stay on the road for long periods of time in either a fondo, bike tour, or any longer rides.

The Liv Envi Advanced Pro 0 is a high-end road bike that will meet the needs of the woman looking for the leading edge in aerodynamics, light-weight, and responsiveness.  This sweet bike comes with SRAM Red etap 11 speed, an advanced grade carbon frame and Giant SLR 0 Aero wheel set.  This bike is for the women looking excel on climbs, punchy sprints and technical corners.  With its aerodynamic frame and slick paint job, this bike’s race-ready geometry has it ready to be pedaled fast! 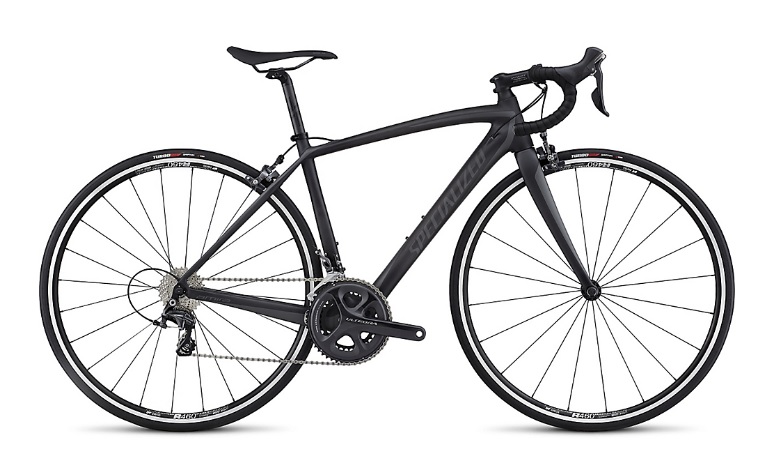 The Amira Comp is a road racing bike at an affordable price point.  It comes with Shimano Ultegra components, a carbon frame, internal cable routing and a competitive geometry.  With a matte black paint job it is a stealth bike that is sure to provide a responsive ride.  At its mid-range price it will meet the needs of the woman looking to upgrade to a more competitive bike while avoiding breaking the bank.

The SuperX Women’s Force is a women’s specific cyclocross or gravel-road bike.  This bike provides the rider with unparalleled stability, traction and support.  It comes equipped with SRAM Force components, a BallisTec carbon frame, and aggressive geometry specific for cyclocross racing.  With its compact handlebars, women’s saddle, small frame size options, and awesome paint job, it is the perfect cross-racing machine for any woman hoping to excel off the paved road and to look good while doing it.

The growing market of women’s road bikes has created many opportunities for women get a bike that will fit her lifestyle, body, and budget.  Depending on what you are looking to accomplish on the road there is a bike to meet those needs, plus often a cool paint job to go with it!

Want To Know How To Properly Buy a Bike?

Check out how to buy a bike that gets into the homework you should do prior to going to a bike shop, what questions to ask when you get there, what to look for on a test ride, and a few other details to make your buying experience seamless.

Women’s specific bikes have recently become more and more popular with the majority of bike manufacturer’s now offering bikes specifically made for women. In the past, bikes were just bikes, and to accommodate women’s shorter torso length and generally smaller body size, parts were changed and adjusted to try and get a bike as close as possible to a good fit. Some bikes had better geometry than others that made this possible but it was still a challenge and no one wants to change half the stuff on their bike before they can ride it. There are a number of modifications that can be done but the biggest and most desirable is the women’s specific frame which now comes in road, mountain bike, and even a few time trial/triathlon bikes.

The biggest difference between men’s body geometries and women’s is torso length. Regular men’s frames generally leave women too stretched out on the bike reaching for the handlebars. A smaller frame could be chosen but that leaves the seat tube at too short of a length as their legs make up the majority of their height particularly with longer femurs.

Women’s specific bike frames are made to have a shorter top tube length which brings the bars closer to the body. This however can create a few problems. The first is toe overlap with the front wheel. The second is that with a shorter top tube handling can be compromised. To accommodate for these issues, the head tube angle is relaxed which pushes the front wheel further out to the front. The length of the head tube is also generally lengthened which more easily brings the handlebars up which if left too low can be harder to reach which can put a lot of strain on the back. Also, a slightly steeper seat tube angle is used to more easily reduce top tube length.

These combinations lead to a bike that is sized well for the average women and handles as a bike should. Also on mountain bikes, in addition to the above, a lower top tube is generally used to allow more clearance when standing over the bike with both feet on the ground.

Women’s shoulders are generally narrower and so normal men’s road bars are too wide. A bar width of 38cm to 40cm is common and allows the hands to be positioned squarely in front of the shoulders which not only is more comfortable but also aids in handling.

A compact crankset has gears of 50×34 as opposed to the normal 53×39. This allows for the use of smaller gears and an increased ease of spinning over climbs, particularly steeper ones. Crankset is largely proportional to a rider’s strength, both male and female, as well as terrain. If you happen to find yourself struggling up climbs or have a cadence below 70 up a climb it is likely that a compact crankset or a triple crankset is beneficial.

Other Differences in Women’s Specific Bikes

One other site-ly difference, colors. This largely depends on manufacturer, but a lot of women’s specific bikes will be colored with pink, light blue, and purple tones, while some women gravitate to it, it seems there are nearly an equal number that dislike the colors. Also the bar tape as well as saddle color may be different to highlight that it’s a women’s bike. This can sometimes be hard to get around but a number of bike manufacturers do make neutral colored women’s bikes.

If you’re a woman, buying a women’s specific bike is largely the way to go. The only real exception is if your body geometry is more suited to a men’s frame; namely your torso isn’t as short. If you do go that route, still make sure the rest of the parts are geared toward a woman as you don’t want to be stuck changing everything mentioned above on your own. The differences in frame design are where a lot of the advantages occur. Ride one and talk to someone who knows specifically about fitting a bike for a woman and you’ll be riding comfortably on a bike before you know it.