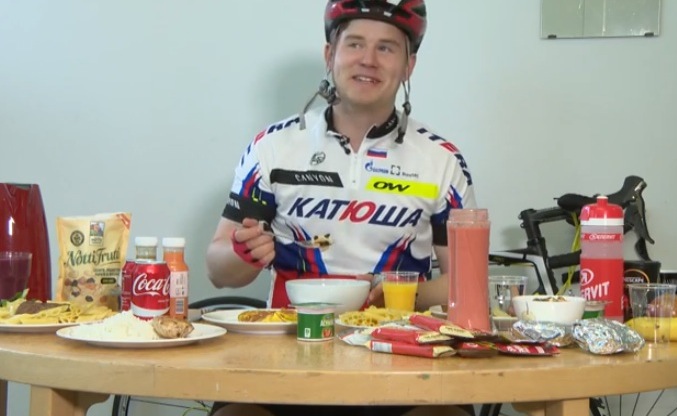 Pro cyclists ride their bikes a lot and thus burn an absurd amount of calories. For optimal performance these calories must be replaced with optimal nutrients and of sufficient quantity. How much a pro cyclist eats depends on their training and racing load as the more they ride, the more they eat. With the high activity level, metabolism follows suit and even if a professional rider isn’t training as much, their body is still burning ‘hot’ and metabolizing a lot of food. The average cyclist typically isn’t going to come close to the calorie consumption of a professional cyclist but they can try.

How Much a Pro Cyclist Eats For Breakfast

On a big training or racing day, the typical pro road cyclist is going to consume between 1,000 and 2,000 calories to prepare for the task at hand. This is generally going to be an assortment of oats, rice, pasta, eggs, bread, pastries, fruit, and sometimes juice and most of the time coffee; ample coffee. They will eat this number of calories at least three hours before the ride to ensure that it all isn’t just sitting in their stomach when they try and go hard.

How Much a Pro Cyclist Eats While Riding

A pro cyclist eats a lot on the bike as typically the length of races range from three to six hours. Liquid food simply can’t provide someone with enough calories without potentially getting an upset stomach so real food is eaten. Depending upon intensity, a pro rider can burn anywhere from 500 to over 1000 calories per hour and the general goal is to replace half those calories each hour. This is done by eating little pre-made sandwiches typically of ham, sometimes cheese, maybe jelly or Nutella or if you’re in Europe, Eurocrem. Also, rice cakes, bars, and an assortment of cookies will be eaten along with gels and other quick digesting pre-packaged foods toward the end of a race. Because the main energy source is from carbohydrates namely in the form of sugar, things like candy bars and Coke’s are also eaten and drunken in ample quantities.

How Much a Pro Cyclist Eats For Dinner

With a big day of racing or training behind a pro rider, dinner is thoroughly looked forward toward and enjoyed. The breakdown of the body after a hard workout is reparable by eating the proper nutrients; namely protein, carbohydrates, and fat with sufficient vitamins and minerals. The riders who can eat the same as or more of what they burned simply will be able to recover faster and become stronger as the body has what it needs to repair itself. For dinner, meals generally revolve around a main carbohydrate such as rice or pasta depending upon where you are in the world. The exact protein as well as side vegetables depends also on where you are in the world as in Europe there are a lot of different things available than say compared to Asia and cultural differences as say compared to the United States. Quantity wise, many pros will eat three full plates of food to recover and fuel for the next day’s ride or race.

Differences in Consumption During Training and Racing

There are two big differences to what and how much a pro cyclist eats relative to if they are racing or just training. Typically at races the menu is just whatever the hotel or restaurant is serving although a number of the larger teams have their own chefs to ensure their riders are getting exactly what they need. When out racing you can’t always have what you would normally make at home while training where you can make exactly what you want. Also while home training, pros are generally in a constant battle with losing weight. Training is the time to do it so calories are often limited so even though a ride may have burned 5000 calories, they may only replace 4000 of them.

While pro cyclists can eat a lot of food, they can also ride relatively far and fast on very little food and can rely on the efficient conversion of fat to energy. This is also where they differ from the average cyclist. Their bodies are so tuned at being able to eat, digest, and turn large quantities of food into energy that they can also use those energy stores and convert them to energy far after the average cyclist would have bonked and gone home.

The grand total of what a pro cyclist eats in a day can range from 3000 calories on a shorter day to upwards of 9 and 10,000 calories on massive race or training days. That’s the equivalent of one and a half to five times what the average person eats in a day. That’s simply a lot of food. When races roll into town, race hotel kitchens are briefed ahead of time as to the quantity of food that is needed otherwise they would simply run out before everyone had their fill. The more you ride the more you eat. To eat as much as a pro cyclist it would not only take a lot of riding but also years of building your metabolism. The more efficiently you can convert a lot of food to helpful things in your body to rebuild muscles, the better cyclist you will be and whether the pro had the natural talent or gained it over the years, they have their eating dialed. 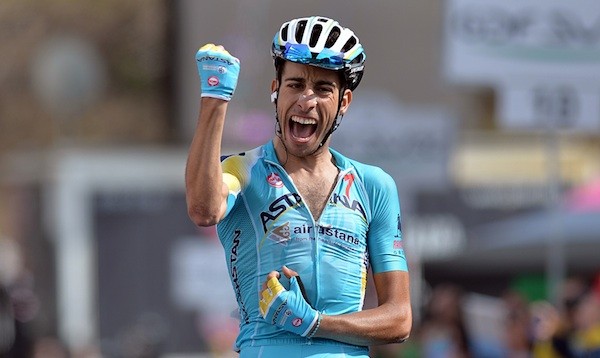 It is next to impossible to predict which riders will light up the racing calendar, especially in a sport where fate can be especially fickle. Riders racing for General Classification honours and team leader roles are easier to read, but the surprise appearance of young hopefuls who snatch stage wins from their elders is one of the things that makes cycling so interesting.

Narrowing down the list to just five riders was really tough, and we’ve skirted some of the more obvious candidates in favour of those who may have snuck in under the radar on the back of a great 2015.

The young Italian has climbed through 2015, first up mountains and then through the ranks at Astana. Handed leadership for the Giro d’Italia, Aru won two mountain stages back to back, and finished the race in 2nd place.

After teammate Nibali’s underwhelming performance at the Tour de France, manager Vinokourov appeared to lose faith in the 2014 winner and chose to send three possible GC contenders to the Vuelta a Espana in Aru, Nibali and Landa. However after stage 2, Nibali’s bad luck continued with a disqualification for holding onto a team car.

Aru’s season has been far more positive and far less controversial than Nibali’s so I would not be surprised if we see Aru’s name at the top of the roster and perhaps even winning a Grand Tour in 2016.

The sheer volume of racing days has not impacted on the Welshman’s performance. After a solid cobbled classics campaign, winning E3 Harelbeke and claiming third at the stormy Gent-Wevelgem, Thomas has flung himself at two Grand Tours in support of Froome.

As we saw at the Tour de France, it is clear he is capable of doing a stellar job of his domestique duties and still finishing in a strong position. He played a decisive role on the climbs, calmly reeling in attacks from other GC contenders to keep Froome in yellow.

Thomas was arguably one of the strongest riders at the Tour, and we have seen him go from classics specialist to potential general classification contender. 2016 is unlikely to be his GC year, but Thomas’s career is accelerating fast.

The former South African Champion had a great start to the season at the Tour of Oman, African Continental Championships, and the overall victory he snatched from Team Sky’s Ben Swift at the Coppi e Bartali in Italy.

As part of the inspiring MTN-Qhubeka team, Meintjes was never far from the front when the road went up in France. Sadly he was forced to abandon a few days before the end, but not before making himself known in breakaways and showing bravery on the climbs.

I’d like to see what he can do at the Ardennes Classics and he could have a Grand Tour summit finish in his legs in 2016.

Just one of Etixx-Quickstep’s powerhouses, Zdenek Stybar’s victory at the Strade Bianche came at the start of a busy classics campaign. Most notable were his handful of top ten finishes in France and Belgium including second place at E3 Harelbeke and Paris-Roubaix.

It’s easy to forget his Stage 6 win at the Tour de France as it was overshadowed by his teammate Tony Martin’s crash and subsequent withdrawal while wearing yellow. It was his second Grand Tour stage win. He could well double that figure next year and he might be an outside shot for a one-day Classic like Paris-Roubaix.

The British twins may not be grateful for being lumped together all the time, but if Orica GreenEDGE can give them joint leadership, then why not? Success has swung between them all season and neither seems to show sign of weakness.

Simon had a great run-up to the Tour with a strong Criterium du Dauphine, taking home four top ten finishes and the best young rider’s jersey. Both twins relished the climbs at the Tour de France with two and three top ten finishes respectively. Finally, let’s not forget Adam’s victory at the Clasica San Sebastian where he seemed the most surprised to finish ahead of big names such as Gilbert, Valverde, Rodriguez, etc.

It’s fascinating to have two such similar riders in the same team and it will be thrilling to see how they progress. Will they continue to share the spoils or will the Yates rivalry be the most hotly discussed in the history of cycling?

There are so many other riders who have not made the shortlist, and no doubt a few names will pop up as the Vuelta draws to a close and we near the end of the season.

Two young hopefuls that will certainly have Team Sky fans excited are Brits Alex Peters and Tao Geoghegan-Hart, who joined the superteam as late-season stagiaires this year. With so much great British talent on the roster, it mightn’t be too long before we start to see some fractures within the camp. How long, really, will talented riders like Luke Rowe, who are well down the pecking order at Sky wait until seeking a leadership spot elsewhere?

Mikel Landa, widely tipped to join Team Sky next season, could well climb into contention when the road goes up at the Vuelta this month, and two more Orica GreenEDGE riders, Esteban Chaves and Caleb Ewan have great potential. They have both lit up the first week of the Vuelta with Chaves taking, losing, and retaking the overall lead, plus three stage wins between them.

And finally, it will be interesting to see what Tejay van Garderen could do with the form he demonstrated early in the Tour de France. He will be joined at BMC by Grand Tour hopeful Richie Porte, which may mean he is forced to play second fiddle, but the American’s GC potential is clear to see.

Is there anyone we’ve overlooked?