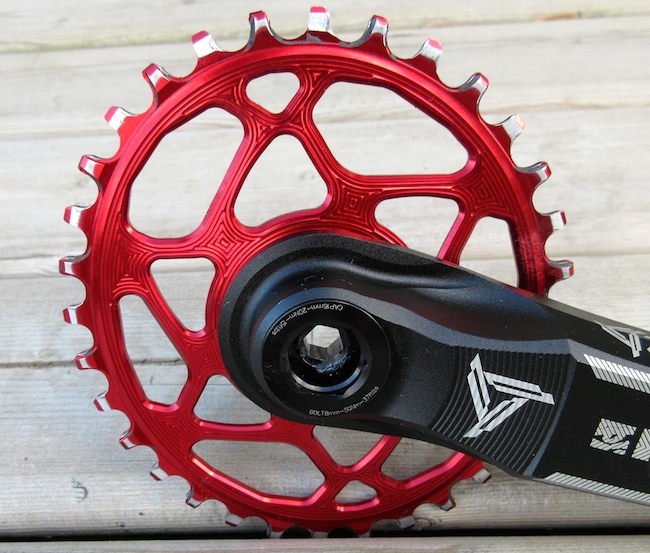 Absolute Black sent us a sample of their stunning Absolute Black Oval Chainrings. Why oval you ask? The benefits to oval rings have been discussed and tested for over 100 years. Do they work? Some labs say they do. In fact some of the latest Tour De France winners use them! But there is some contradictory evidence out there saying the benefits are negligible but a lot of it comes down to personal preference.

In the article where we featured oval chainrings, the basic idea of them is that no human can produce a perfect pedal stroke. When a cyclist’s legs are at the 6, and 12 o’clock part of the pedal stroke it is impossible to produce the same amount of power as one would produce while on the down or upstroke (3 or 9 o’clock). The oval chain ring is designed to make this process smoother by effectively reducing the gear (or making it easier) during these stages of the pedal stroke. 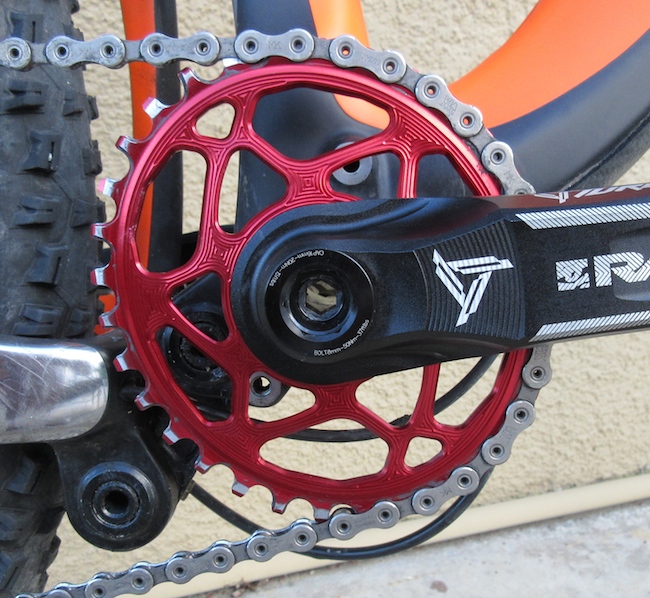 Absolute Black claims that not only are their chainrings more efficient but they are also easier on knees and joints. These bio-mechanical benefits can be denied but in the mountain bike world you also have the benefit of increased traction on soggy days (as the force is spread out more evenly throughout the pedal stroke reducing ‘spin out’) but they also come in a 1x or narrow-wide options AND in fantastic colors!

The Absolute Black oval chainrings we received are beautiful. The machining is extensive, and its obvious there has been a lot of thought and work put into these rings. 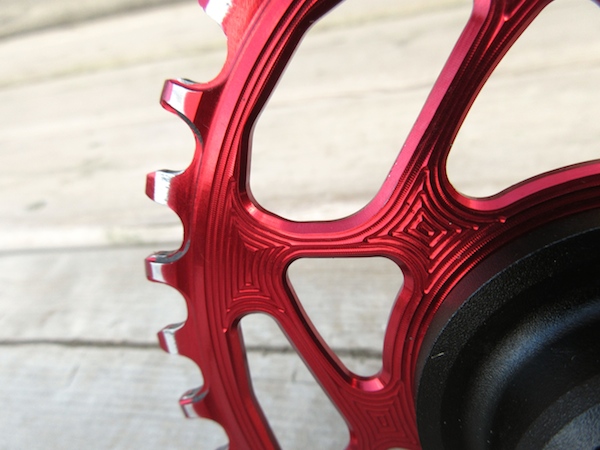 Installation is very straight forward. Mechanics are rejoicing everywhere with the emergence of not only the single ring set up, but also direct mount crank systems such as Race Face and Sram where you effectively attach the chainring directly to the crank, as opposed to a ‘spider’ . The benefits are lighter weight, clean look, and to be frank, it has less  that can go wrong. The Absolute Black Oval Chainring went on in mere minutes and has been solid ever since on my Race Face crank.

When doing the first few meters on oval rings the sensation is terrible. Its hard to describe, but its almost as if your bike is trying to buck you off! I considered turning around and taking the chainring off but stuck with it in the spirit of the test.

After mere minutes that feeling oddly dissipates and you are left riding with ‘normal’ riding sensations. Its a mystery to me why this happens but it does!

While its hard to say if the benefits of the chainrings are real from a power output point of view, the traction benefits are apparent. On a duel suspension sometimes it feels as if you are fighting the bike while on steep climbs. I found the chainrings smoothed out the pedal stroke and generally made for a better ride with more traction. I would go as far to say that I will continue to ride with oval rings from now on as there are many benefits with no real down side.

Chain retention with Absolute Black Oval Chainrings is fantastic. In 2 months, I never lost a chain once, despite having it on both a duel suspension and hard tail bike frame leaving the clutch mechanism off! This goes to show Absolute Black have made a great ring, as they have been ridden primarily on some of the roughest trails of British Columbia.

In conclusion this ring is fantastic. It’s light, it’s pretty, it works very well. I can’t really say a bad thing about it. 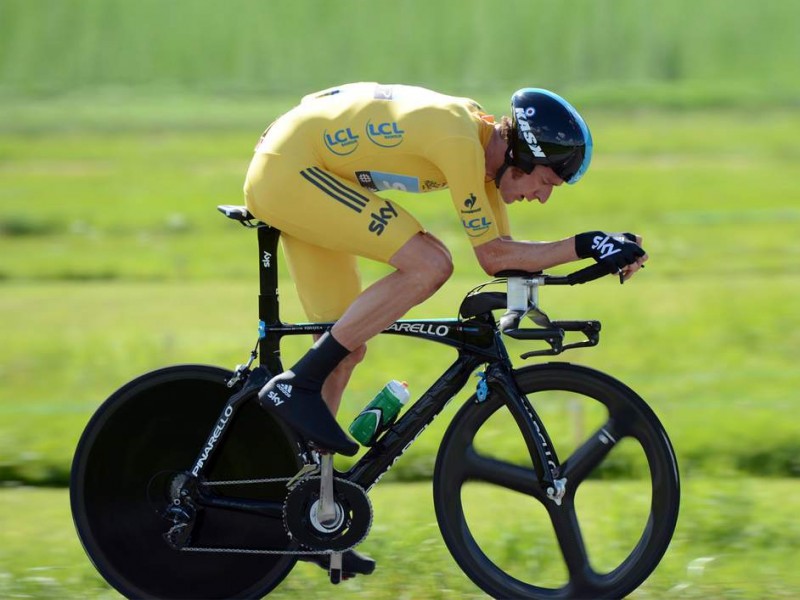 Oval chainrings have been around since nearly the advent of chain driven bicycles. The concept is simple; the chainring is at a larger radius when you are at a stronger portion of your pedal stroke and at a lower radius at a weaker portion. But does it actually make a rider faster or more efficient? Or is this another gadget designed to separate you from your money?

Myriad of Claims with Oval Chainrings

The claims are myriad with oval chainrings: it’s easier to turn over a higher cadence, your lactic acid production will be lower, you will access your stronger pedaling muscles while resting your weaker muscles, your overall power will increase (7-10% according to Osymetrics!). If it sounds too good to be true, it usually is.

There have been a few notable results on oval chainrings in the last few years. The two biggest results to date are Bradley Wiggins winning the Tour de France in 2012 and Chris Froome winning in 2013 and 2015. Both rode for Team Sky, a team that is known for its search for marginal gains. Since that Tour victory, Wiggins has switched back to round chainrings. The truth is that people have won all sorts of races on all sorts of equipment with dubious benefits. There is a psychological edge if someone believes in the equipment they are on. If a rider believes that oval chainrings give a boost in performance, they may ride with a bit more confidence in their abilities. People have lucky socks. Why not have lucky chainrings too?

“These are people that are racing for their income. Teams would be clamoring for them because they need to get the best results possible for their programs to continue.”

There have been few peer reviewed research studies on oval chainrings. The Journal of Sports Science and Medicine published an article in May 2014 with the results of a test on twelve elite male cyclists. They tested for blood lactate, power output, and oxygen consumption with no discernible differences. The oval chainrings did not produce a scientifically significant enough difference over the round chainrings in a maximal sprint test to put the results outside the margin of error. Another claim is that oval chainrings allow for a lower metabolic cost than round chainrings which the study also found not to be true.

Another peer reviewed study from December 2010 tested cyclists in a 10 kilometer time trial. This study also found similar power output and rate of perceived exertion between round and oval chainrings. It also found that heart rate was statistically significantly higher with the oval chainring versus the round chainring which is contrary to the claimed benefits of oval chainrings.

This January 2004 test also did not find conclusive benefits to oval chainrings. They measured ventilation, oxygen uptake, carbon dioxide output, respiratory exchange ratio, and heart rate with no statistically significant differences between round and oval chainrings.

Installing Oval Chainrings On A Bike

Thinking about your shifting performance in the heat of a critical moment is not ideal. Will the chain flawlessly go up to the big ring right at the crest of the hill? Will the chain fall off to the inside just as the big climb starts? Couple that with the cost of an oval chainring being on par with the best shifting round chainrings and the benefits become negligible. Nobody ever blamed losing a race on chainring shape but they certainly have on poor shifting performance.

A lot of riders have a lot of data from their crank-based power meters. Oval chainrings change the angular velocity of the crankarms, thus changing the power transmitted to the strain gauges, yielding different power numbers than if the same person was pedaling round chainrings. All of that accumulated data (which is very useful for long-term training) is rendered useless. It’s almost as if the data is from two different people; one on round chainrings, one on oval chainrings.

Oval chainrings are a divisive subject. Supporters point to physics to support their claims of greater power through lower effort. Peer reviewed experiments show the opposite and that the benefits are negligible at best. There is no question that the mechanical operation of the bike will suffer. A finely tuned bicycle with round chainrings will always shift better than the same bicycle with oval chainrings. Switching round for oval chainrings will also make years of power data useless for comparison. But if it gives a rider a mental edge, it all may be worth it.