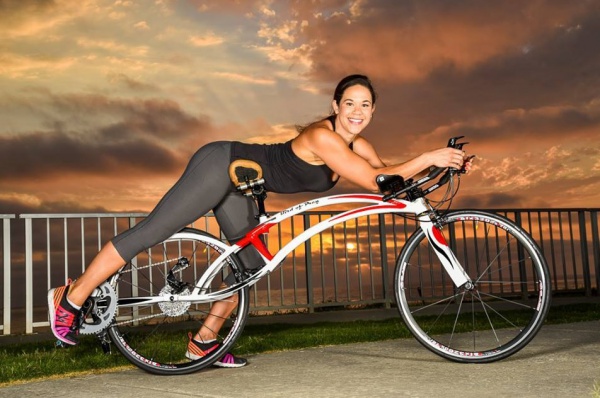 Recumbents have been around for years, but the Bird of Prey Bike is not a recumbent. The new design integrates a semi-prone position that’s been described as flying like Superman. Riders report that bike is indeed fast and efficient. But it doesn’t stop there. The Bird of Prey Bike also allows for a level of comfort not typically found on upright or recumbent designs.

The Inventor of The Bird of Prey Bike

California-based designer John Aldridge, 69 years old, is an architect and inventor. He came up with the concept for the original Bird of Prey Bike in 1991. Aldrich attests that it’s the fastest racing bicycle in the world, having hit 45 mph on his own Bird of Prey.

Part of Aldrige’s inspiration in building a semi-prone bicycle dealt with the fact that standard bikes had poor aerodynamics. Riders are subject to too much wind resistance. The laying-down position of the Bird of Prey solved all of that.

Aldridge connected with Russ Denny in Texas who was a bike builder for 30 years. Denny was the catalyst giving the Bird of Prey its physical form in 2010. It was first publicly shown in 2014. Advertising for the production model officially began in September of 2015.

Semi-prone means that even though you’re in a laying down position, your torso is still facing upward so that you can see. You’re not looking straight down at the pavement. Semi-prone also means you’ll never do an endo over the handlebars. “Panic braking on a Bird of Prey is safer. You come to a direct stop immediately, because the center of gravity is lower. The rider is not thrust forward when they brakes”, says Aldrich.

Aldrich says the pedaling force is greater than on a standard bicycle. Aldrich compares it to a runner. “I’ve never seen anyone in a footrace in a sit-down position”. He says. “The same thing could be said for swimming.”

“Uphill, the stability when you’re stretched out allows you to crank more easily, at 90 to 100 rpm, (that’s spinning like crazy going uphill) and it takes you to the top in a shorter time”, says Alridge, who got 7th place overall and first place in his age category using a Bird of Prey in the Long Beach Triathlon this year. At the time of publication, it was perfectly legal for triathletes to use the Bird of Prey in competition.

The body weight of the rider is supported by an aero bar-like rest. “You’re laying down on the front of your hips (the iliac crest). You don’t get tired at all, and when you push your pedals you can shove your body against those bones and they counteract the push on your pedals”, says Alridge.

An upside down, backward drivetrain differentiates the Bird of Prey from sit-down bikes. With a 60-tooth chainring (mounted behind the back tire), the raptor is bound to be fast, albeit a bit odd looking. Most standard road bikes for example have only 50-53 tooth chainrings at best. The Bird of Prey runs a somewhat standard 10 or 11 cogs on the cassette. Another advantage, if you break something, it utilizes parts that can typically be found on other bikes.

Caleb Thompson is a professional cyclist from Colorado, and one of Aldridge’s first customers. Thompson says: “With a bit of practice and getting used to, I could see it being faster than a time trial bike.”  Thompson adds that he believes he could “potentially generate more power, because of the leg positioning, and the larger-than-normal chainring. “I’m able to turn it over fairly easily once up to speed,” he adds.

Although designed for aerodynamics, the Bird of Prey has other benefits — comfort. Standard sit-down bikes center the weight and pressure of the spine on the saddle, which can lead to pain or discomfort for some riders. Riding the semi-prone Bird of Prey relieves pressure on the spine, and is reported to be quite comfortable. “You have to ride the bike to understand how comfortable it really is,” Aldridge insists.

A single disadvantage — visibility — both seeing and being seen by other traffic could be a challenge.