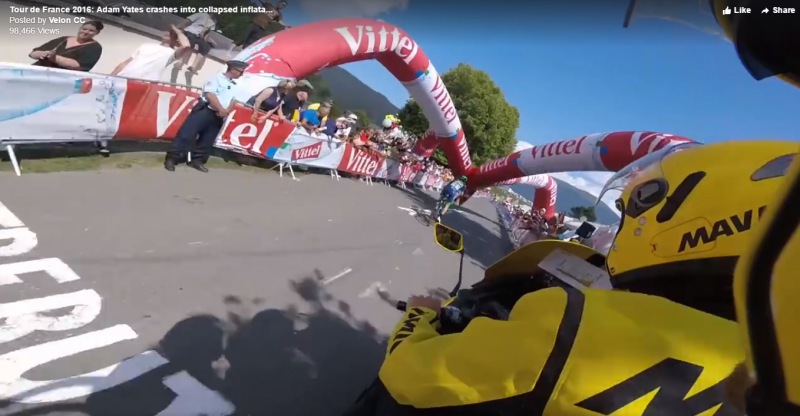 Adam Yates of Orica Bike-Exchange was off the front by himself in second place on Stage 7. Meanwhile, a fan ventured too close to the generator keeping the 1 kilometer to go inflatable upright and apparently caught his belt on the power cored for it. With about near perfect timing, the collapsing inflatable caught Yates just as he was riding under it. The follow moto carrying spare wheels caught the whole thing on a GoPro which is the video below. Yates luckily only needed stitches on his chin but that will be a crash he as well as the cycling world will remember for a long time.

Tour de France 2016: Adam Yates crashes into collapsed inflata…Watch the moment when Adam Yates, of Orica Bike-Exchange, hit an inflatable arch which collapsed as he powered his way towards the finish line in Stage 7. Yates, who needed stitches in a chin injury, said later: “I had no idea I had hit something. Next thing I knew I was on the floor.”