Shifting gears on a bike is one of the first things to learn as a new rider. After steering and the brakes, shifting is going to allow you to more easily and effectively navigate the terrain that you’re riding. Because of the complexity of gears and shifting, learning how to shift gears on a bike is not always straightforward and simple. There are a lot of parts on a bike and each one has a specific job. Knowing how to shift gears on a bike and how the actual shifters work and how to use them will make your riding more functional as well as more enjoyable.

There are six main components to shifting gears. The first two are the shift levers on both the right and left side of your handle bars. These are then connected with a cable that attaches to the next two important parts; the derailleurs. There is a front derailleur, which is operated by the left shifter, and a rear derailleur, which is operated by the right derailleur. The derailleurs shift the chain up or down the front chainrings or up and down the rear cassette or cluster of gears. That’s basically all there is to propelling the simple machine of a bicycle forward except that there are a number of different types of shifters.

The derailleurs, chainrings, and cassettes are more or less the same on most bikes. They will differ in construction but they still do the same basic thing whereas the shifters are operated in a different way across types. Once you know how each one works you be able to easily tell which type of shifters you have so you know how to shift gears on a bike, any bike. 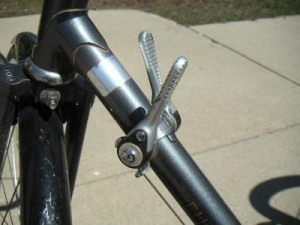 Lever or downtube shifters are the older style of shifters often found on old steel road bikes. The right one shifts the rear derailleur and the left, the front. Pulling the left, or front, lever backwards tightens the cable and pushes the chain up to a bigger front chainring. To shift down, simply push the lever in the opposite direction. To shift the rear derailleur down to a harder gear, press the lever up and pull down to shift up to an easier gear. You will feel the gears shift as you move the lever so if the gear isn’t lined up well, you may have to adjust the position of the lever a little to get it to line up perfectly with the gears. Newer and improved downtube shifters are indexed meaning that there is a click that corresponds to each gear.

Now-a-days road bikes have indexed shifting meaning that there is a click for each gear. Also the shifting is done with the brake lever and/or another paddle that shifts the opposite way. Each of the major three companies making shifters has a bit different approach so here are all three. 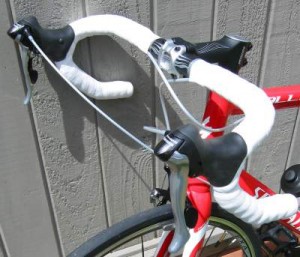 Shimano is one of the most widely used road bike shifting mechanisms. They use two methods to shift. The first you will find on older Shimano shifters as well as lower end ones. These shift by pressing the brake lever inward toward the center of the bike to shift down to a harder gear on the rear cassette while the left, front lever shifts the front derailleur up to a hard gear. To go the opposite direction, there is a small thumb button on the inside of hood. Instead of using the thumb button, newer and higher end Shimano shifters use a paddle that is just to the inside of the brake lever. This is simply pressed inward toward the center of the bike on its own, ie. not with the brake lever. 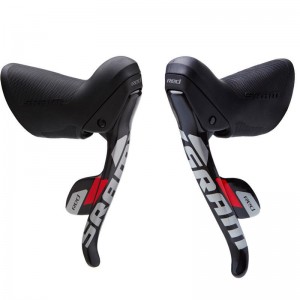 Sram uses as similar approach that Shimano does with the inner paddle but instead of having a second button or paddle, this one does it all. For the rear derailleur, press the right paddle (the brake lever does not move) in about one centimeter to shift down to a harder gear. To shift up to an easier gear, simply press the paddle further inward, approximately three centimeters. For the left, front shifter, shifting slightly in shifts down while making a larger swipe inward shifts your front chainring up. 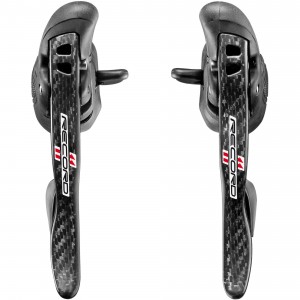 Campy’s design is similar to that of Shimanos older and lower end shifters as they use an inner paddle from the brake lever and a thumb button on the inside of the hood. The difference is that Campy has pretty high end shifters with the similar design. 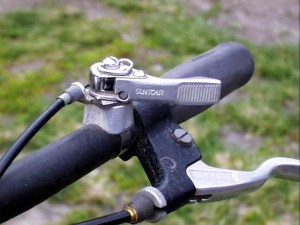 Older style mountain bike shifters use a simple lever that is pushed one way to shift up and the other to shift down. It will depend if you need to shift forward or back depending on where the shifter is mounted and if it’s the front or rear shifter. An easy way to figure out which way to go is the for the right, rear shifter it will be harder to press in one direction while you are pedaling. This direction will shift up to and easier gear while shifting in the easier direction will shift down to a harder gear. 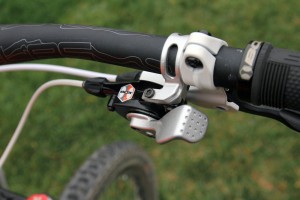 On most modern day mountain bikes you will find this type of twin lever shifting. There are a few different styles with some having two levers below the bars while some have one lever above and one below. Typically for the rear shifter, the lower lever shifts up to and easier gear while the upper shifts down to a harder gear. For the front shifter this is reversed. 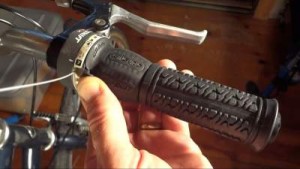 Twist grip shifters typically come on many lower level mountain bikes as well as kid’s bikes. They operate with a simple twist forward or back. Typically there will also be numbers displayed showing you which gear you are in. For the right, rear shifter, rotating forward to a larger number shifts down to a harder gear while rotating back toward you shifts up to and easier smaller number. For the left, front shifter, rotating forward shifts down to an easier gear and a smaller number while rotating backwards shifts up to a harder and larger number.

How to Shift Gears on a Bike – The Technique of When

Now that you know how to shift gears on a bike, you need to know when to shift. Typically you want to keep a steady pedal stroke that isn’t either too slow and hard, nor too easy and fast. Finding the right gear for what you’re comfortable with along with the type of terrain your riding will come with practice. Typically as you ride slower, say up a hill, you will shift to the smaller front chain ring with the left shifter while you also shift up to and easier gear in the back with the right shifter. If you’re going faster, say on flat smooth ground or down a hill, you shift the front chainring up to a harder gear with the left shifter and shift down to a harder gear in the back with the right shifter.

Learning how to shift gears on a bike is one of those things that you learn when starting to ride and as you ride more, you will get good at it. Just make sure to practice in a safe area, say an empty parking lot or driveway, as your focus will be on the shifting, not and traffic or other hazards that may be around.