Smart phones are an incredible tool that can be a great way to start tracking your rides and navigating new areas. If you’re not ready to invest in a specific cycling computer, or just prefer to use your phone, then you’re going to need a way to attach it to your handle bars. You could break out the duct tape, but we don’t recommend it. There a ton of great bicycle phone mounts out there that can keep your beloved phone safe. 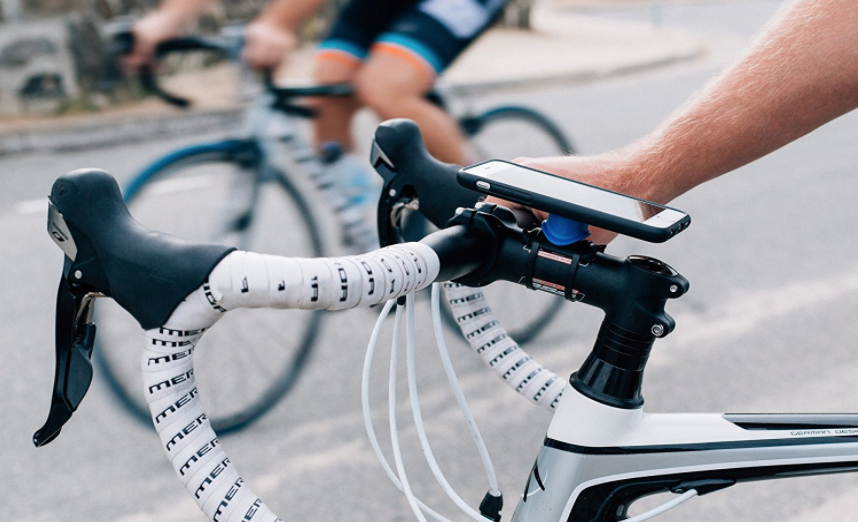 With the Strava app, you can track data similar to on a GPS unit, and there are even ANT+ receivers for smartphone to integrate data from heart rate monitors, power meters, and cadence sensors. However, the main issue will be your battery life. Most phones will not last a long ride while running GPS the entire time. Also, if you take a tumble, your phone can be at risk. That being said, a handlebar mount can be a great way to start including technology in your ride without the investment of a cycling computer.

This simple case and mount gets the job done with no hassle or fuss. It’s tough and weatherproof once the seal is fastened and the flap rolled down, and comes in a variety of version for various models. It is a clear polyurethane cover fastened by a velcro flap. The mount is a strong plastic band that is tightened by a thumb screw. It takes all of 30 seconds to put on, and it stay nice a secure. You can then clip the case in place in either landscape or portrait orientation. It’s one downfall is accessing the iPhones power button up top when it’s in the case, but this isn’t a huge deal. 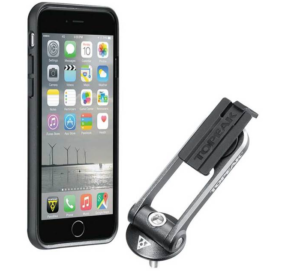 There are a couple versions of this case and mount available, the most popular being the weatherproof version for the Iphone 6. It’s snug design is meant for the perfect fit and protection against dirt and rain while riding. The weatherproof shield allows easy touch screen access in both wet or dry conditions. The mount is fully adjustable for viewing in landscape or portrait, and it’s quick and easy to unclip the case from the mount at anytime. 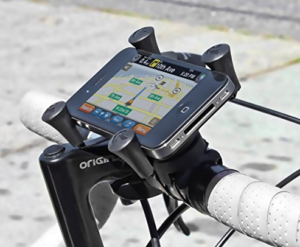 This universal rubber ball and socket mount system will fit any phone you throw at it. It’s easy to instal, easy to use, and tough. The one con is that the spring loaded holder can end up hitting the volume buttons on the side of some phones, but that can easily be avoided with precise placement. 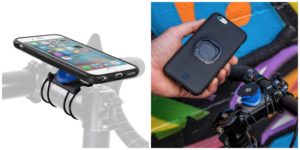 The Quad Lock Bike Kit includes a slim case for a variety of phone models, a mount, and a weather resistant cover. The patented lock system makes for a secure connection, while maintaining a quick and easy release built right into the case. The case itself is tough enough, and yet desecrate enough for day-to-day use so you don’t have to switch out your case every time you ride.

Cycling computers can do a lot to enhance your training and track important aspects of your ride. Some riders are just curious, while others use the data as a means of motivation. So, whether you’re looking for an in-depth analysis of every second, or to simply track your routes to see where you’ve been – there’s a cycling computer for that.

There are an overwhelming amount of cycling computers on the market, with both brands and models coming and going each year. So what makes one better than the other? Well, that depends on what you want it to do.

What kind of cycling computer is best for you?

If you’re not interested in chasing any Strava segments or going into detail about every aspect of your cycling, then you don’t need one of the top of the line cycling computers. In fact, a basic unit will most likely provide you with all the information your want and need.  Most of them will include your distance, speed, and time. Most of these do not include GPS and do not allow you to transfer data to a computer or tracking service.

They are simple, easy to use, and effective if you’re just looking for those three areas of information. They will also be smaller, lighter, and often have better battery life than the pricier performance models. 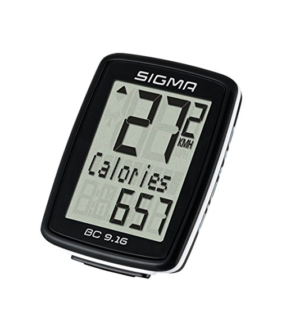 The Sigma BC series has been a go-to for years when looking for simple reliability. The new BC 9.26 also includes some bells and whistles that previous models did not. The basic features include current speed, average speed, trip distance, total distance, ride time, total ride time, maximum speed, and calories. The unique thing about this model is there is an optional USB docking station, so you can transfer ride information to from the computer to your Mac/PC to keep track of your rides. 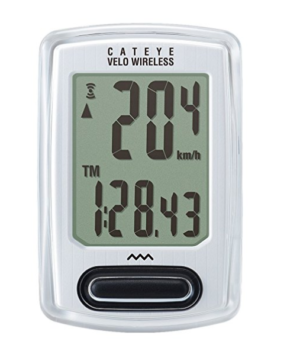 The Cateye Strada includes all the basic stats, plus a few bonus features, all in a slim and lightweight design. On the display you can scroll through current, max, and average speed, your total distance, trip distance, elapsed time, calories burned, and a clock. The Strada is also a great computer to switch between your road and mountain bike, as there is an option to pre-program more than one bike with different wheel sizes.

This model is known for its long lasting battery life (upwards of three years) and it’s waterproof seal.

The more complex GPS and ANT+ interface cycling computers can provide a lot more features. They will include things like mapping and navigation, while collecting information from heart rate monitors, cadence sensors, and power meters. They also track your ride using an internal GPS, so you can see your exact route.

With these cycling computers you can look at your time on any route or segments, and them compare to other users through Strava. 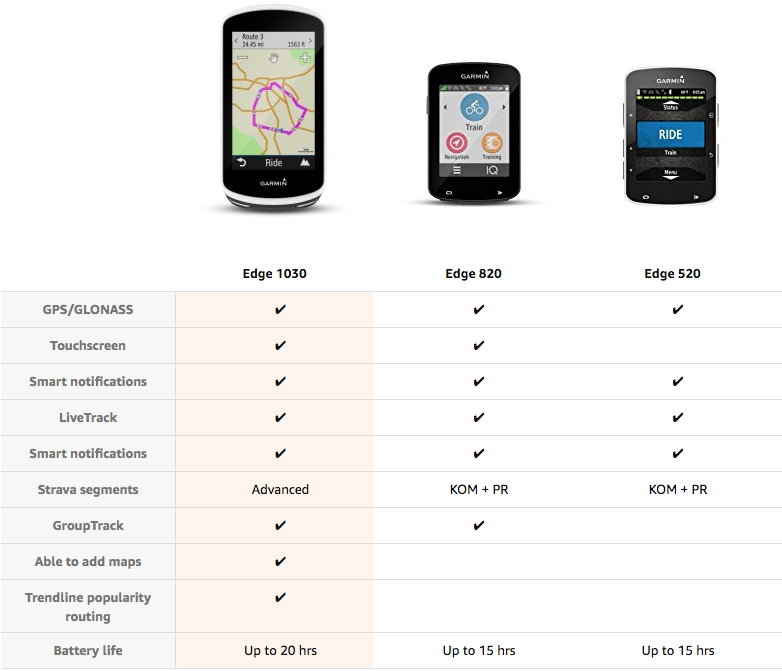 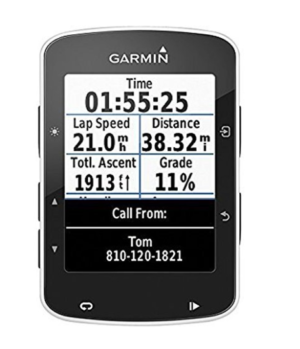 The Edge 520 is great for training with it’s small size and ease of use, but it is not a touchscreen and therefore not as good for navigation. The Edge 520 led the way with new performance and power analysis, including Time in Zone, FTP tracking, cycling specific VO2 and recovery dynamics, but both the 820 and 1000 have since added these features. That being said, if you aren’t in need of much help with navigation, the 520 is a great budget-friendly option. It’s also great for people who prefer buttons over touch screen, if you ride a lot in the rain or with gloves on, but it comes down to personal preference. 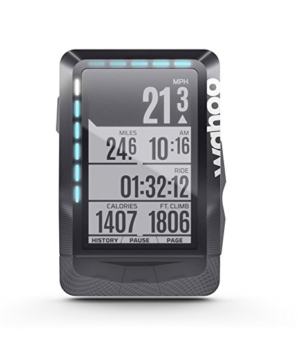 The Wahoo ELEMNT connects to all your peripheral sensors, as well as connect to your smartphone via Bluetooth. The in-unit menus are tedious to get through for set up, but are a breeze when connected to and operated through your smart phone. So unless you have a smartphone, either an iPhone 4s or newer or android 4.3 or newer, this isn’t the unit for you. That being said, it is a stand alone GPS unit. Once connected to your phone it’s simple to customize settings, configure workout pages, and link to popular cycling apps and wireless sensors. Post-ride, the app stores workout history can automatically sync to your linked third party Apps. The ELEMNT can also deliver on-screen alerts for phone calls, texts, and emails if you choose. The high contrast black and white screen is a selling point, making it easy to see even in sunlight. 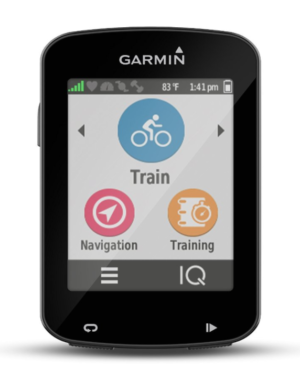 The Garmin 820 is the hybrid, combining the touch screen of the Edge 1000 with the smaller size of the 520. So, is it the best of both worlds? Almost. The computer is easy to use, uploads your rides directly to Strava via your phone or wifi, and you can see incoming calls and texts while you ride. It’s downfall is the navigation. If you’re used to the larger screen of the Edge 1000 or even your smartphone, the 820 will take some getting used to. It’s not as if the navigation is terrible, but the touchscreen is much smaller, and can there seem a little cramped. 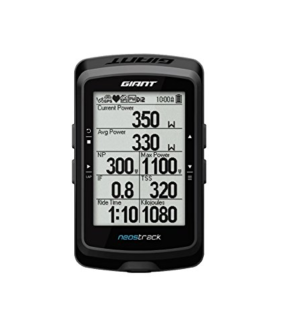 With over 30 hours of battery life, 2.6 inch screen, five button operation, and 80 functions, the Giant NeosTrack is a great budget friendly option. It’s no-nonsense, with a focus on functionality rather than flashy selling features. It can record all the standard metrics, as well as many of the more technical fields like TSS, normalized power, and L/R power. It is fully compatible with your smartphone via Bluetooth, but it a little slow when transferring ride data. Overall, it’s a great unit if you’re more concerned with data, and aren’t too worried about getting text notifications while out on a ride. 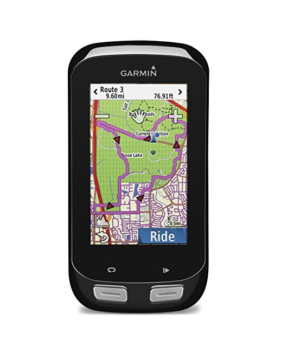 There has actually never been a better time to buy the Edge 1000, as the price has decreased with the recent release of the 1030. So far, the response to the upgrade as had mixed reviews, with most claiming it’s not worth the extra couple hundred dollars. For years the Edge 1000 was Garmin’s premium model, with the large screen making it great for training and navigation. When paired with your smartphone, the Edge includes including live tracking, incoming call and text alerts, social media sharing, weather, wireless uploads and sending/receiving courses and segments. As soon as your ride is complete, the data can be automatically sent to Garmin Connect via Bluetooth or Wi-Fi. Really, there’s not much this computer can’t do, but the battery can become an issue on long rides (one aspect that was improved with the 1030).

Why not just use your smartphone? With the Strava app, you can track data similar to on a GPS unit, and there are even ANT+ receivers for smartphone to integrate data from heart rate monitors, power meters, and cadence sensors.

The main issue will be your battery life. Most phones will not last a long ride while running GPS the entire time. Also, unless you have a handlebar mount, you won’t be able to see the screen as your riding, which is one of the main perks of a cycling computer.