The benefits of cycling may be too numerous to list, but there are probably some aspects they you may not have thought about before. We all know that riding a bike is great for your physical health, but what about your mental health?

There has always been a link between exercise and improved mood, as studies through the years have revealed, but it goes beyond just a good mood. As more and more research is being done, there is a clear link between exercise (specifically outdoor exercise) and combatting depression, anxiety, and stress.

Although many people may, at first, hop on a bike to lose weight or embrace an active lifestyle, a very valuable side effect is a happier, more stable life. Mental health may be an even stronger predictor of life expectancy than physical health, so it is one of the most valuable benefits of cycling. 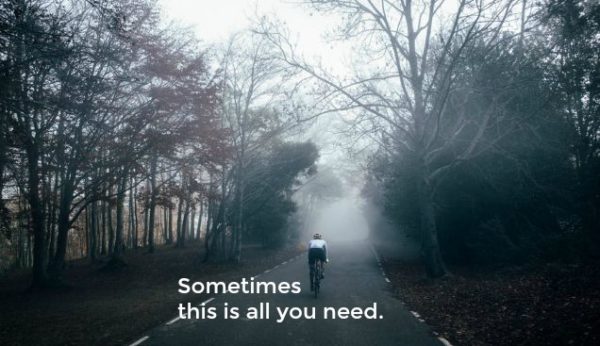 Top 10 Benefits of Cycling for Your Mental Health

Exercise should be something you look forward to in your day, not something you’re just checking off the to-do list. It should be so a part of your lifestyle that it becomes less about burning calories and more about how it makes you feel. Cycling is one of the greatest forms of exercise within everyday life. Not every ride has to be a huge ordeal, but even a half hour ride or a commute to and from work can have huge benefits both physically and mentally. It doesn’t have to be competitive or even goal focused, but can be a way to get outside and leave all that stress at the office.

People often overlook this fact, but have you ever wondered why individuals that are physically active always seem so much happier than those that aren’t? It’s not just a coincidence, and it actually has a lot to do with the chemicals inside of your brain. When we cycle, our heart pumps blood to every single blood vessel and cell at a greater rate. With blood comes oxygen, and oxygen plays host to endorphins!

Endorphins are a microscopic chemical that help us to feel good. The more endorphins we have, the happier we feel. Just a few hours of cycling a week can trigger a consistent flow of these chemicals, and they aren’t just great for your emotions – they have also been linked to fighting illnesses like Alzheimer’s! 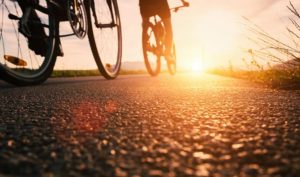 We all have our vices, the things that we turn to in times of stress or emotional trauma. Cycling can replace the more harmful addictions such as cigarettes, alcohol, or overeating and serve as that go-to thing that you know will make you feel better. Sometimes it’s tough to find the motivation (yes, sitting on the couch eating chips may be easier), but you’ll never regret getting out there. Make cycling your first plan of attack, and you may just find yourself not being able to stop.

Many creatives such as writers, musicians, and artists use exercise as a means of getting past mental blocks. I know I’ve had some of my best ideas come to me while out on a bike! The uniform movement of cycling has a relaxing effect on the brain, stabilizing both physical and mental function. A recent study showed that after just 30 minutes of cycling, participants scored higher on tests of memory, reasoning, and planning. So, instead of banging your head on your desk or scrolling through Facebook, try heading out for a ride.

Exercise has been shown to help regulate your sleep patterns. One reason may be the body-heating effects of exercise and cycling in particular. The increased temperature followed by the post-ride drop promotes falling asleep through decreasing arousal, anxiety, and stress.

Cycling can, for some people, be as effective as medication–without the side effects. This isn’t true for everyone, of course, but trying exercise as means of fighting depression can be a great first step. Cycling promotes all kinds of changes in the brain, including new thought patterns that promote feelings of calm and well-being. Plus, you have those endorphins kicking around, which can act as powerful chemicals within the brain.

Cycling also relieves tension and stress, boosts mental and physical energy, and can help fight anxiety. It can be a great way to “zone out,” but you can also use it as a time to focus in and even meditate. Pay attention to each rotation of your legs, the rhythm of your breathing, the wind on your face. It may sound cliche, but this will leave no room for the otherwise constant flow of worries running through your mind. 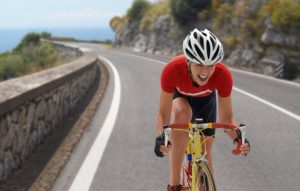 There’s no better feeling than tackling a tough climb and knowing it’s nothing but your own physical and mental strength getting you to the top. You will feel strong and powerful, and that begins to make it’s way into the other parts of your life. You will feel better about your appearance, and will have a sense of achievement as you meet and surpass goals you set for yourself.

With so many jobs now tied to computers and chairs, stress has a way of tensing our bodies, making them exhausted and sore by the end of the day. You may find you suffer from back and neck pain, or constant headaches from stress. This can become a cycle that feeds itself, with stress going in and exhaustion coming out. Cycling can be a great way to break the cycle and relieve tension in the body. In turn, as your body relaxes, so will your mind as that stress begins to lift from your shoulders.

Cycling and physical activity immediately boost the brain’s dopamine, norepinephrine, and serotonin levels—all of which affect focus and attention.

It may seem counterintuitive, but exercise is one of the best ways to gain more energy. Yes, you are using physical energy on your ride, but spending time with that elevated heart rate will give you a boost of energy.

If there’s a single form of exercise that medical experts promote above all others – it’s cardio. Your cardiovascular health is incredibly important, and as a cyclist you’re already benefitting. But just how beneficial is cycling for your health? Does it simply improve your internal well-being, or can it have an effect on your external and emotional health too? The answer is actually pretty incredible. In fact after years of research, doctors state that cycling is one of the most advantageous exercises around. Here are the many benefits of cycling for you mind, body, and overall health. 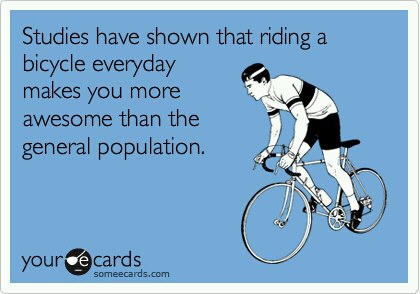 People often overlook this fact, but have you ever wondered why individuals that are physically active always seem so much happier than those that aren’t? It’s not just a coincidence, and it actually has a lot to do with the chemicals inside of your brain. When we cycle, our heart pumps blood to every single blood vessel and cell at a greater rate. With blood comes oxygen, and oxygen plays host to some of the most positive endorphins imaginable!

Endorphins are a microscopic chemical that help us to feel good. The more endorphins we have, the happier we feel. Just a few hours of cycling a week can trigger a consistent flow of these chemicals, and they aren’t just great for your emotions – they have also been linked to fighting illnesses like Alzheimer’s! The next time you take to your bike, try to remind yourself that you’re doing much more for your brain than simply enjoying the ride! 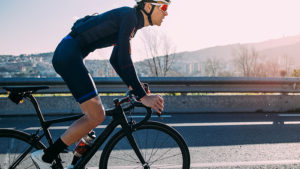 Keeping your organs fit and healthy is very important. When you’re cycling, your heart and lungs are in consistent use and, just like any other muscle, the more that you use them, the stronger they’ll grow. Studies have shown that just 15 minutes of exercise a day can encourage the development of healthier organs, and cycling just so happens to be one of the best forms of exercise!

As briefly mentioned above, cycling is a form of cardiovascular exercise (as is anything that gets your heart pumping at an improved rate consistently). The more that you cycle, the more that your heart and lungs will be in use. As your heart pumps blood around your body, your lungs provide a fresh supply of oxygen, and this is what’s so beneficial to your organs.

Unlike direct muscle-building exercises, cycling is a little more focused on endurance, but with endurance comes strength. The main muscles used while cycling are your quads, hamstrings, calves and even glutes and hip flexors. As you pedal, your leg muscles are being used consistently, and the higher the gear; the more strain will be placed on your muscles.

The more that you cycle, the more often your muscles will be put to work, and the stronger they’ll grow. If you eat the proper amounts of protein, fat and carbs, you’ll soon find that your muscles begin to increase in size, as well as strength. 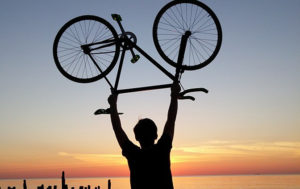 As enjoyable as cycling is, it’s actually a powerhouse of health and fitness too, and the more that you do it, the healthier you’ll feel. The great thing about cycling is that there really isn’t a limit on how much it can improve your health. Even the unhealthiest individual can climb on a bike, spend 15 to 30 minutes cycling, and start to feel a change. So imagine how healthy active cyclists could be if they consistently went for a ride a few times a week?

A healthy mind can go a long way, and a healthy body will go even further. The harder you push your limits, the quicker your body will adapt to the pressure, and you’ll soon be tackling rides that you struggled with at first. If you’re already at a point where you feel like a pretty competent cyclist, then there’s no harm in pushing your limits to improve your performance. 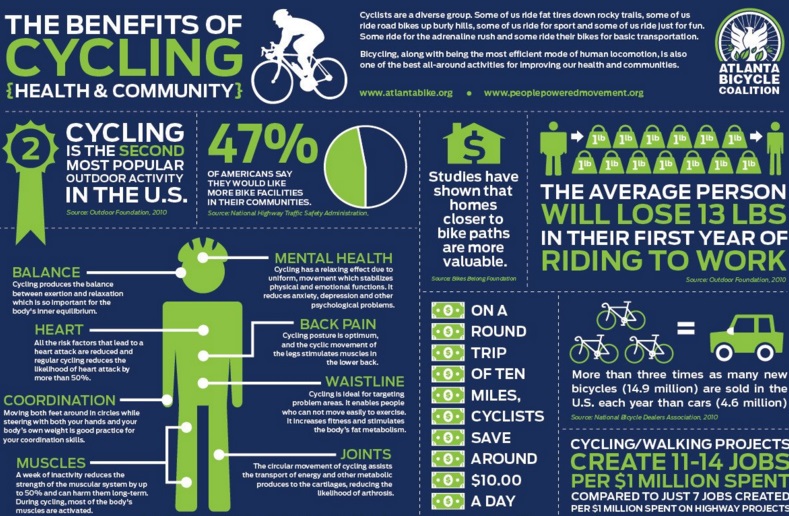 The benefits of cycling come in all different shapes and sizes. Whether you are riding to loose weight, to get to work, to save money, to just have fun, the benefits are endless. Find the reasons why you want to ride and use them to motivate you and get out the door on your bike each and every day. Can you make that a goal? Can you stick to it? You’ll see even more benefits even than what falls within this info-graphic from www.peoplepoweredmovement.org. What are some of the benefits you experience from cycling? Let us know in the comments below.