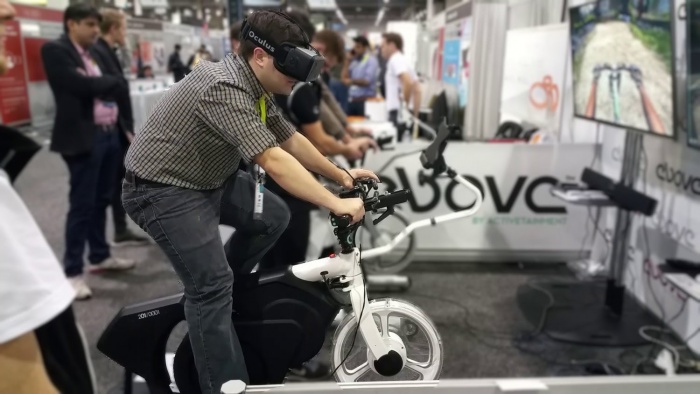 The College of Athletic Performance at the University of Chestester has concluded a research study on the physiological and psychological effects of riding a bike at high intensity with external stimulations. Their study simulated real world riding conditions through the use of a stationary bike, a shaking mechanism, fans, mist, along with video eyeglasses and ear buds that the rider would wear to simulate what they would see and hear if they were riding down a road. The rider was placed in varying conditions featuring other riders riding and racing with them along with vehicular traffic which was coupled with road vibration, wind, and rain effects. This caused the riders body to generate normal feedback as if riding in the “real world”. The riders heart, lung, and brain activity were monitored along with how the rider felt and how tired their legs were. This was then followed with the same testing and monitoring of the rider on open roads under similar conditions to compare the findings and validate the “controlled” study.

The results of the study found that increased mind stimulation and body output could be achieved through the use of a “real world simulating stationary bike”. Increased levels of adrenaline and endorphins were found in the body during exercise on the stationary bike. This was also correlated with how the riders said they felt after a particularly invigorating ride that featured simulated pot holes, wind from a descent, and close calls with vehicles in the video eyeglasses. When the rider was placed “racing” against another rider, increased power, oxygen uptake, and a higher level of physical output were observed.

This means that a rider can have more of a “real world” feel, both mentally and physically, through the use of a real world simulating stationary bike than actually riding outside on the roads. This is because the intensity of stimulating factors, such as a scary descent or a car buzzing you closely, can be increased to create an increased response from the brain. The resistance of the stationary bike could also be adjusted to induce more stress on the legs thus resulting in increased physiological adaptations.

The “Fake It – Live It Stationary Bike”

As a result of the study the researchers developed an all in one virtual reality bike called the Fake It – Live It Stationary Bike. The bike has all of the features above: vibrations, wind, and mist, along with the video eyeglasses and ear buds along with varying resistance to give a complete real world feel.

The Fake It – Live It Stationary Bike is also programmed to give you a higher adrenaline and endorphin response along with a greater physiological stress on your legs than a real world ride would give. It does this by monitoring your activity levels throughout your day (such as how much your walking, sitting around, etc.) through the motion sensor in your smart phone along with how much you sleep at night. It then calculates how fatigued you are and places you under the maximum mental and physical stress your body can handle. You tell it how long you have to ride and it then places you in a ride to obtain the appropriate stressors to achieve the proper response from the body and mind.

Why You Need One

The Fake It – Live It Stationary Bike is now recommended by doctors, athletic trainers, and sports psychologists as the new best way to keep your body fit and healthy along with keeping your mind sharp and fresh. It can do all of this while keeping you safe in your own home where don’t have to worry about getting hit by cars, dogs chasing you, other cyclists causing you problems, ever getting lost, finding new roads and experiences, and ever actually having fun on your bike again. You can purchase one for the price of $16.70 Chestester University Dollars which is equivalent to 1/3 of 1/8 of $401.16Usd at your neighborhood convenience store. Don’t get fooled by how much of an affect riding inside can have on you.

Happy April Fools Day. Get out and ride!