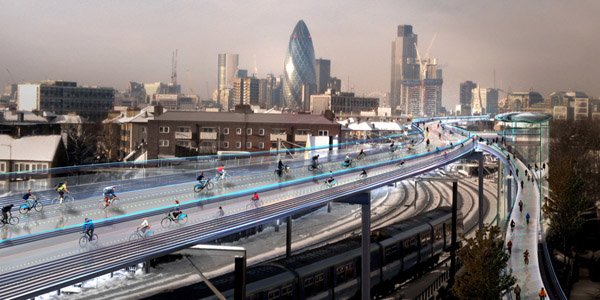 Norman Foster has designed cycling paths above London;s railways in response to 14 cyclist deaths in the city during 2013. SkyCycle is a “cycling utopia” of approximately 220 kilometers of cycles lanes with over 200 entrance points that will be above the current train lines.

SkyCycle will be able to accommodate approximately 12,000 cyclists per hour and is an innovative idea to a serious problem in London.

This route will take approximately 20 years to build. Streets are already congested and the population growth is estimated to rise approximately 10% per year for the next few year. Can this possibly be the solution to safer roads? Will it come soon enough? What happens in the mean time?

It is unlikely with the new infrastructure that we would ever see 6 deaths in a two week span ever again. There would be increased health benefits and significantly less congestion. It is estimated that travel times would be cut down by approximately 30 minutes.

Norman Foster describes the plan as “a lateral approach to finding space in a congested city.”

“By using the corridors above the suburban railways,” he said, “we could create a world-class network of safe, car-free cycle routes that are ideally located for commuters.”

Do you think the SkyCycle is a good idea for London to implement? Share below and leave a comment.