Your bike has a supportive saddle to rest your body weight on your sit bones. Why would you ever want to rise up from the saddle to go uphill? You just have to put more weight on your legs… It turns out there are some compelling reasons why you would want to either sit or stand while climbing. 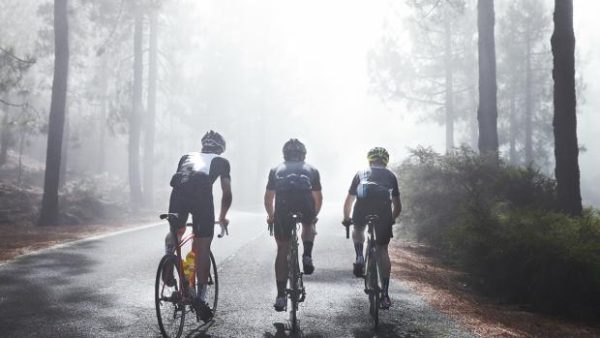 Sit or Stand While Climbing?

Everyone has a different riding style. Even when choosing between whether to sit or stand while climbing, riding style comes into play. It may be how you grew up riding, maybe there was an influential coach that pushed you one way or the other, or maybe there was a pro rider you tried to emulate. Regardless of which it is, there’s likely a way  you inherently prefer to climb. But science can also help to determine whether you should sit or stand while climbing.

Standing while climbing is much more similar to running than turning over the pedals while sitting. A more vertical position on the bike results in higher heart rate and higher oxygen consumption, but not greater energy expenditure according to this detailed study. Running uses more energy and is less efficient than riding, but the energy expenditure is different in cycling; standing versus sitting uses the same energy.

Larger riders will use more energy proportionally while standing. There is more weight to support along with more weight to bring up the hill. The loose formula to figure out climbing style is to divide weight in pounds by height in inches.

A 2 to 1 ratio or lower is usually a pure climber who can ride out of the saddle for long periods of time. A 2.1-2.5 to 1 ratio can benefit from switching between styles. A ratio of 2.5 to 1 or greater should probably stay seated to benefit from the bike supporting the rider’s weight.

According to this study on whether to sit or stand while climbing, the subjects experienced a significantly lower perceived exertion on a ten percent grade while standing versus sitting. This is despite a much higher heart rate and oxygen uptake. Good sensations in the legs do not always tell the whole story. In fact, they may even lead you astray of the most efficient method of cresting a climb.

Ernst Hansen’s 2008 Study of ten well-trained male cyclists is likely the most definitive study on whether to sit or stand while climbing. The subjects were tested on a ten percent climb at four levels of power. There was no difference between standing and sitting at the lowest level; eighty-six percent of VO2 Max power. It is still an intense effort, but it allows for a rider to make a choice whether to sit or stand while climbing. The study found that ninety-four percent of VO2 Max power is the tipping point where climbing while standing versus sitting becomes more efficient. At the two upper levels tested, up to a maximum of 165 percent of VO2 Max power, standing was far more efficient.

You must remember that this efficiency holds true only if it is a skill that you have honed and allowed your muscles to adapt to. It will be highly inefficient to climb out of the saddle if you have not trained this skill.

Some hills do not give you a choice of whether you can sit or stand while climbing. Some hills are so steep (or perhaps your bike is wildly over-geared for steep hills) that to get over them you must climb out of the saddle. This is a consideration of your threshold and how low you will let your cadence go. You may be able to grind out a twenty percent climb in a 39/25 at 38rpm, but it probably is not the most efficient way to make it to the top. Engaging your arm muscles to rock the bike is the order of the day when the climbs get really steep.

A corrollary to being over-geared or under-cadenced is whenever cadence becomes uncomfortably low, stand up and climb, even if it is not necessarily based on the gradient.

Research likely does not consider comfort regardless of the efficiency that it may find. Riding out of the saddle opens your hips to recruit your calves and glutes, which likely remain fresher than your tired quads. Sometimes you want to give a muscle group or your sit bones a rest. Shifting from standing to sitting or vice versa can help keep your body fresher for longer, especially on a really long climb.

When roads or trails get wet, traction changes. A climb that may be perfectly fine to ride out of the saddle in the dry may now spin your rear wheel out when wet. An additional consideration is whether the road surface changes. Perhaps it is asphalt but has a lot of tar patches covering cracks. Maybe there is a lot of paint on the road. Both tar and paint become very slippery when wet, forcing you to stay in the saddle to maintain traction. It is also very important to remember tar and paint’s additional slickness when cornering. Another traction consideration is loose dirt roads. You will be forced to sit  just to make it over a climb that has a lot of dirt and gravel.

Making Sense of All the Data

All of the data can make for some confusing choices. Here are some good rules of thumb to help you decide whether to sit or stand while climbing:

In the end, climbing while standing is not less efficient if you have trained it. Get out there and practice. At the very least it will give your muscles a break on longer climbs.