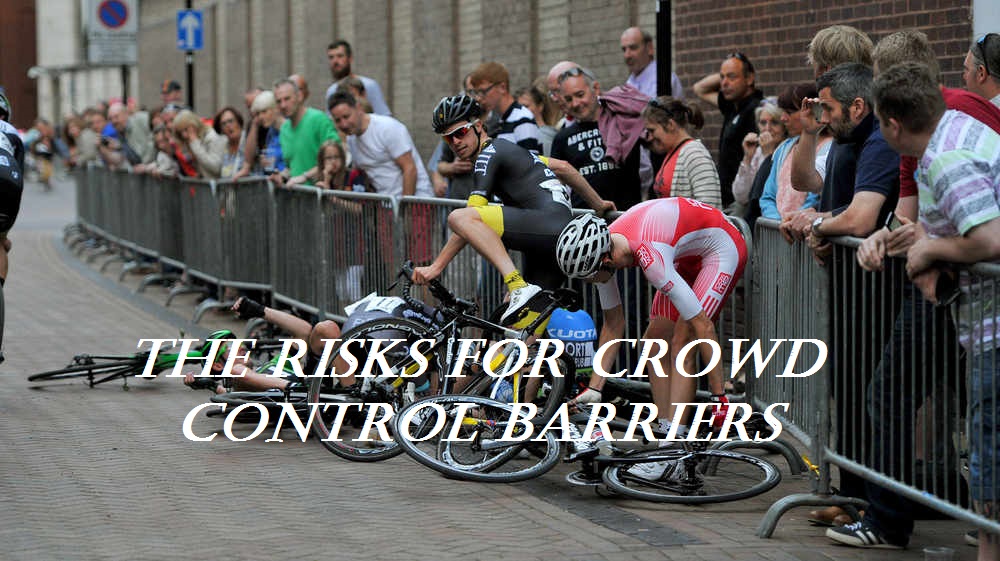 If you have been to a cycling event you have probably seen crowd control barriers being used. Events from local charity rides all the way up to the Tour de France keep both riders and spectators safe from each other with them. They however can present an added danger to riders that event promoters don’t often consider or weigh heavily enough. Your next event may have barriers that can not only cause a crash but potentially cause serious injury. Don’t just accept the risks and hope for the best but rather contact the promoter with your concern and share this article with them as well. If they don’t at least listen, do they have your best interest in mind?

What Causes Barriers To Be Unsafe

Bike riding is a dangerous sport and crashes resulting in injury will happen especially when there are large groups involved. That said, when an unnecessary element of danger is added to an event, it is a risk that only has negative outcomes with no upside. For example, if you risk going over a jump on your bike, there is the negative side of crashing. On the flip side, if you land the jump, it’s awesome and you feel ecstatic and want to do it again. Having an improper barrier has no upside aside from saving time and money in course set-up. The three main issues with barriers being unsafe are as follows.

The base of crowd control barriers, specifically the metal ones, are generally either flat bottoms with a center post for the barrier to set in or an upside-down Y shaped stand with the feet protruding to either side. The flat bottom barriers are the kind that should be used for cycling events particularly when placed right up to where a rider can ride. The protruding base of the Y stand type can catch the wheels of riders causing them to crash instantly.

With metal barriers there is a lot of space between bars where arms and other body parts can enter and become entangled in the event of a crash. With plastic barriers they can give and break but with metal barriers, body parts break before metal bars ever will. In addition to dangerous gaps with metal barriers, the edges of them at the corners and ends can be very sharp and dangerous if left uncovered. Bannering, as seen in the photo below, should be durable and secured with zip-ties and in a way to cover the tops and sharp edges. Doing this will prevent body parts from entering between the bars.

Even if the proper type of barriers are used and they are properly secured with bannering, improper placement can still cause a crash and serious injury. Placement largely depends upon the specific roadway and objective but two general steps can be taken to avoid incident.

The first is having barriers that begin abruptly in the roadway. Riders can run straight into the end of them if placed improperly.

Have the barriers gradually enter the roadway to force the riders to slide over with the barrier further into the road. If they do still run into the barrier, they will only hit it at the sloping angle.

Abrupt curves or protruding barriers can cause riders to clip the barriers while riding in a straight line.

Make sure the barriers are perfectly straight or if going through a curve, they curve naturally. No barriers should ever be further out into the roadway than the ones around it. If a separation is needed in the barriers, at a cross-walk for example, make sure the barrier further forward in the direction of travel is set back to ensure that no riders swerve into the gap and hit it head on.

The Best Barrier for Cycling Events

The barrier for cycling cycling events that are the best are the ones that slope away from the center of the roadway. These allow the riders to ride right up against them (as they will in many events) and still allow room for their handle bars not to clip the fencing. In addition, this places the spectators at a greater distance from the roadway keeping both parties more safe. With these type of barriers then properly covered with banners, they are the safest option for cycling events.

Why The Lack of Focus On Safety

Common sense would say that if you saw an unsafe barrier, you would fix it or not use it in an event. However this does not happen in many events from gran fondos with thousands of riders to professional races where riders are testing the limits of speed on a closed course. The reason is three-fold; time, money, and a mis-understanding of the associated risk. Depending upon available resources, the safe type of barriers may not be cost effective. Events often run on tight margins and spending additional money on something that seems like the same thing often doesn’t happen. In addition, it takes time and people to properly setup barriers and secure bannering on all of them. Also, event promoters often have a lot on their plate and don’t always fully understand how easily a crash can happen with a barrier and also how easily a rider’s body can get caught up, or cut on one.

The time, effort, and money saved by event promoters who do not provide adequate barriers is paid for by the riders in the form of broken bikes and bodies. Bikes are expensive but that doesn’t compare to what medical bills can add up to be not to mention the pain and suffering a rider would go through. Cost shifting such as this never creates a positive outcome and spending a little bit more time and money in the beginning will save time and money as whole in the long run. Participants are the life-blood of events. If they are not taken care of and watched out for will they come back to an event? Some will, some won’t but the question should never have to be asked.

What You Can Do If You’re A:

Before an event, ask the promoter about what sort of barriers they will be using and how they are securing and placing them. They should be following guidelines such as these above. If they just say they’re providing normal, standard barriers they probably don’t know about the potential risks they are placing riders under. Press them to do more to create a safe event with no added unnecessary risks. If you arrive at an event and you see potentially dangerous barriers, notify the promoter and organizers and insist that they do something about it to make it safe. This may take getting a few other riders behind you.

Read and follow the guidelines in this article and do additional research into barriers and what other events are doing and cater it to suit your event. If you are unsure of something, ask someone who knows. When it comes down to costs and making an event viable, tell your participants of the possible added cost of safety barriers and why they’re paying more (if it is a paying event) and that it is for their safety. If keeping costs down is ahead of keeping riders safe should you really be running an event in a sport that involves such a high degree of risk such as cycling?

This crash was not caused by the barriers (the rider simply entered the corner way too fast) but the risk for a high degree of injury is quite significant with no protective bannering being placed. The riders can hit the metal bars directly which focuses the impact to one area and arms, legs, and heads can get caught between the bars while the rider is still in motion.