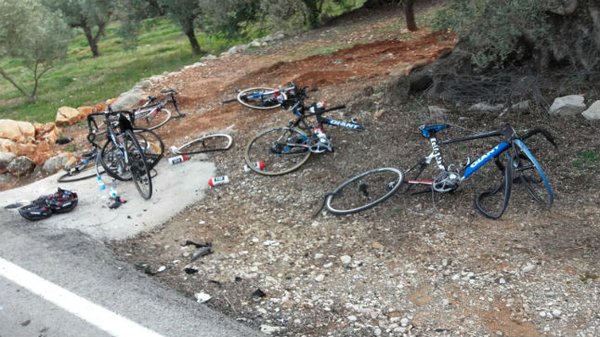 This past week the World Tour Team Team – Giant-Alpecin had a training camp in Calpe, Spain where many teams flock for winter miles because of the good weather and terrain that is available. Bad luck struck however when a tourist from Britain was driving on the wrong side of the road and hit six of the riders, head on. Fortunately, all of the riders are in stable condition following the accident.

This brings up the continued issue of bike safety and awareness on the roadways. These riders were all professionals competing at the top level of the sport and have logged countless miles on the roads for years. If an event of this magnitude can strike a group of riders at this level, it can happen to anyone. In this instance, poor driving was the cause and it just happened to be a group of cyclists around the next bend and not another vehicle.

However, this goes back to the article, Safety in Numbers: More Cyclists, Safer Cycling, which sites that an increased number of cyclists on the roadways results in an increased awareness for cyclist, and thus a lower incident rate. In addition, it also increases the overall safety factor on the roads in general. It’s unclear of the exact circumstance, but had this women been properly educated about the increased cycling traffic on the roadways because of being a popular destination for cycling teams, she hopefully would not only have been more aware of cyclists on the roadways, but also in the overall attention to her driving in general. This hopefully would have resulted in her paying more attention and remembering that this location drives on the opposite side of the road than what she was used to at home.

As with the Giant-Alpecin Professional Cycling Team, it’s often the case of dumb luck. You just can’t predict or expect something like that. After better educating and making the general public more aware, it is up to us to better our odds of avoiding incidents. The best solution is to simply ride roads that have less traffic and a wider shoulder. These are often rural country roads however which have the greater likelihood of vehicles travelling at faster speeds, and blind turns such as the case here in Spain, but less of them. With greater odds of reducing your crossings with vehicles there is still always a risk. In the event that something like this does happen, it’s just a matter of how you react and how quick as well as the driver. The best thing you can do to prepare for this is to just make sure your bike handling is up to snuff so you can brake and/or put your bike exactly where you want to go without even thinking about it.

Stay safe riding and don’t let the likelihood of incidents deter you from riding. There are far more things that have a greater risk factor and just being aware of your surroundings significantly lowers your risk. Keep your head up and pay attention. And enjoy the ride.