The first time I met Penne I was dumbfounded by her raw beauty. I didn’t know her name at the time but I was mesmerized. Little did I know she would become such a large part of my life. She arrived on a Thursday afternoon. The doorbell rang and I rushed from the garage where my workshop is, flung open the the front door and yelled thank you to the delivery man who had dropped her off.  “I can’t wait to get into this box,” I said as I picked her up and headed back to the garage.

She had been shipped from Zambikes in Zambia and was part of The Bamboo Cycle, my investigation into philanthropy and riding a bamboo tandem from Banff, Canada to the border of Mexico with Hammer* strapped to the back seat.

Inside the standard sized bike box I found a large bag made from dyed fabric. A drawstring held the end closed. It was clearly handmade and, in my opinion, a nice touch from the manufacturer. I opened the bag to find a hemp-wrapped steer tube staring at me. I pull the frame out of the bag and was immediately struck by her sleek lines. 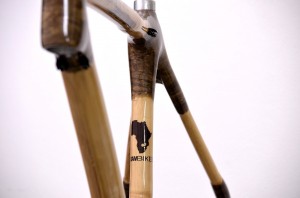 She wasn’t perfectly symmetrical and had a few bumps in places I didn’t expect.  She was unique to say the least. Her seat tube was curved to follow the arc of the rear wheel.  Her builder had stenciled his or her first initial and surname onto the chain stay. She was a bit overweight, about four lbs when she was stripped naked but what a damn good looking bike.

There are a couple types of bamboo frames. The first is bamboo tubes that are connected by metal joints. Essentially these bikes are regular steel or aluminum bike frames with a chunk of bamboo for tubes.

The second type is almost entirely bamboo. The tubes are cut, mitered together and glued to five bits or metal: steer tube, bottom bracket, seat tube and two dropouts. Once they are all glued together, long strips of hemp fiber are dipped into epoxy and wrapped around the joints to provide the strength from the joints. This is how Penne was made.

It took me two weeks to source all the parts I needed from eBay. I would strip nearly all the components from my current road bike to build her. However, I needed an English threaded bottom bracket, an inch and an eighth fork and headset, and a new stem.

Once everything had arrived, I began the process of building her. Now, one thing you should know when building up a bamboo bicycle is, regardless of what the builder says, DO NOT drill into any of the tubes. If you do, you run the risk of splitting the bamboo and/or getting moisture inside the frame which will ruin it.

For me, that meant I had to attach my water bottle cages with zip ties and had to make a custom shim for my front derailleur clamp. I also had to rig a cable stop for my front derailleur which wasn’t terribly difficult. Obviously if you purchase a bamboo frame from a builder in Africa, you can bring it to your local shop to have it built up.  Just be sure to read my article about how to sweet talk you local shop mechanic before you bring it in.

It was a Tuesday morning when she was all tuned up and ready to go. I tossed on some bike gear and headed for the garage with a stupid grin on my face. I put a couple water bottles full of Spiz** on her and headed down the driveway.

Bamboo frames are touted as the “most comfortable frames you can buy.”  They are compared in weight to steel and in vibration dampening to carbon fiber, both of which they surpass. However, nothing is ever said about their noodle-like floppiness that had me screaming as I took the first corner on her.  I mean they are straight up wobbly!

It took me a solid 45 minutes to get up the courage to go faster than 15 mph. When I pushed on the pedals, I could see the bottom bracket deflecting from left to right. I could initiate a turn by applying opposite torque into the handlebars and deflecting the steer tube a few degrees left or right.  And when I did corner, it felt like the front wheel leaned over first and the rear would follow a second or two later.

I had been gripping the bars so hard that my arms were sore for two days after that first ride. It took a couple days, a call to Zambikes and a whole lot of Zoloft to get up the courage to go back out on her. I was convinced that I was given a defective frame but Vaughn insisted that it was normal and I should not worry. So I loaded her up again and said to myself “If I’m going to die, I might as well die by a shard of bamboo lacerating my femoral artery.”

About ten miles into the ride, I decided to take her mountain biking on the local disc golf course, 23c tires and all. I figured if I couldn’t break her by bunny hopping roots and rocks then she would be ok at highway speed. I darted off the road and onto the trail. I rode her through the woods for about ten minutes listening for cracks, creaks and pops but I heard not a whisper from her. She rode fine and was actually quite smooth on the trail, for a road bike that is.

I finished my ride on the road at top speed and she handled beautifully. Don’t get me wrong, she was loose as all hell but she was smooth on the bumps and got more and more stable with speed. 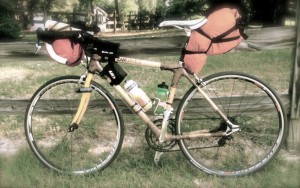 A month later, I loaded her up for a 375 mile ride to the coast for Memorial Day weekend. I put a dry bag under her handlebars with my sleep system and I strapped another modified dry bag to her seat with extra clothes and a bag of Spiz. That with a couple Bento Boxes on her frame and we were off for the weekend.  She had about 35 extra pounds on her; everything we needed for 750 miles in four days. You can read the details of this trip here, but all in all Penne was the best part of that godforsaken weekend.

I put about 4,000 miles on Penne this past summer and I can honestly say she is the most comfortable bike I have ever ridden. She is in no way stiff or snappy but she has a certain quality about her that is really great. She is very comfortable to ride and sturdy, even though she doesn’t feel like it.  She dives into corners with a little pressure on her inside handlebar or an unexpected sneeze so I would recommend not riding with a head cold. She is super good-looking and will attract attention amongst cyclists and ordinary citizens alike. 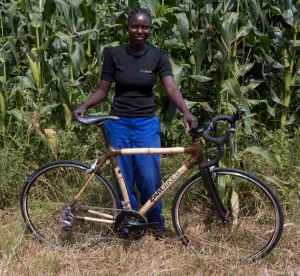 In conclusion, if you’re not a hard core racer or a wannabe hard core racer and you prefer a comfortable ride while attracting a lot of attention you should look into a bamboo bicycle.  Oh yeah, did I mention that if you buy a bike from Zambikes in Africa, you are employing and helping to feed villagers in Zambia? Yeah, that’s right.  Zambikes is a pretty kick ass company. They sell bamboo frames on the global market and the profits go toward building life-saving “Zambulances” that are towed behind bicycles in the African bush and save thousands of lives every year.

Personally I think the market for a bamboo is mostly commuter bikes, both geared and single speeds as well as hardtail mountain bikes for people in the market for something unique and fun. I’m not sure there are too many roadies out there willing to add a few pounds and lose some responsiveness. I guess there have to be a few more people out there like me though.

*The Hammer is a person, a Canadian ultra cyclist named Jason Lane to be precise. He holds the Canadian record in the Race Across America and is the subject of a cycling documentary – The Hammer is due to be released in June of 2015.

**Spiz is a liquid nutrition designed for cyclists. It is really amazing I use it all the time and can’t even think of riding with anything else in my bottle.