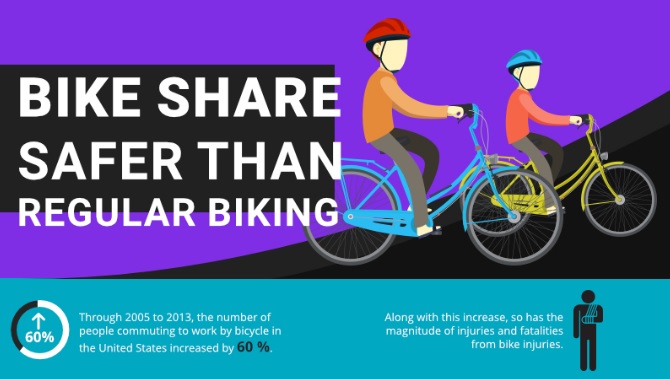 Getting on the road with a bicycle can be a scary prospect to new cyclists. For a start, they have to get to grips with the controls of their bikes. Plus, there is the added pressure of avoiding collisions with other road users like cars and trucks.

Still, more of us are ditching our cars and riding to work on bicycles to be healthier. Plus, it’s a cheaper form of transport that boasts zero carbon emissions.

Did you know that there was a 60% increase in people cycling to work from 2005-2013? It’s a figure that has shown a constant rise each year. The rising price of oil has meant that many of us can’t afford to fill up our tanks with gas.

Of course, the safety issue is still there for new or experienced cyclists. One real alternative is to take part in bike sharing. But, how does that make cycling safer?

For a start, the bikes used are heavier and have wider tires. Those characteristics alone make them safer to ride on bumpy roads.

They also only have seven gears to contend with, making them easier to maneuver. Last but not least, there is also the cost aspect. It’s cheaper to use a bike from a bike sharing scheme than to buy one outright.

The following info-graphic shows other reasons why bike sharing is safer than using regular bikes:

By Cogan and Power, PC.