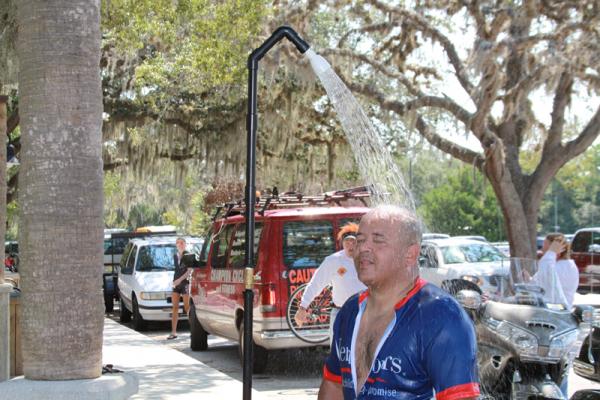 Chamois time it’s called; the time spent in your cycling shorts. Many riders joke that chamois time is training time regardless of if they’re actually riding  their bike. This can be time spent at a coffee shop mid-ride, or at home after a ride while you get something to eat and are too lazy to take a shower yet. This time spent in shorts that have already been ridden in is the worst hygiene for cyclists as it can lead to saddle sores and other issues, not to mention smelling like something the cat dragged in.

What Makes You Dirty While Riding?

When you ride, whether it’s hot or cold, dry or wet, you perspire, particularly in areas such as the armpits and crotch area. This is your body’s way of keeping cool which is good. It becomes bad however when that moisture is left close to the skin, particularly in shorts.

What Manifests When Staying in an Un-Hygienic State?

After a ride, or mid-ride even, bacteria can find their way into those moisture rich areas where they thrive. Your skin in a normal state keeps them on the surface where they can’t enter the body and cause any harm. The issue however with cyclists is that they can enter the surface of the skin at an abrasion, such as the point that you’ve been sitting on on a ride especially if you don’t have the most comfortable saddle or chamois. Clogged pores and hair follicles can also become infected.

In addition to laying the foundation for saddle sores to develop, you also stink and generally feel nasty particularly after a hot day of riding. This again is because of the moisture on your skin but also the salt that stays on your skin even after you’ve stopped sweating giving you this “everything feels sticky and nasty” feel.

Hygiene For Cyclists – Steps to Take to Get Clean

There are a number of hygiene for cyclists steps to take to make sure you don’t stink for one, but more importantly, develop any saddle sores which can be a pain to deal with and treat, quite literally.

Get Out of Your Kit

The first and most important step is to get out of your kit whether at home after a ride or at a race or event. Your chamois is like a sponge and will hold moisture against your skin where bacteria can develop.

If you’re at home, shower right away after getting out of your kit. Have a drink or a bite to eat but do it on the way to the shower. Don’t sit down and have a meal before showering. If you’re at an event, bring a towel and extra water to shower off and wipe yourself down. Antibacterial wipes are also a good option which should be used to wipe down the crotch area as well. You’ll feel much better and cleaner after even if it’s cold out. It’s worth the minute or two of suffering for longer term cleanliness and comfort.

After you’ve cleaned up, make sure you put on clean clothes. Don’t put on a dirty pair of underwear or socks as they also can hold bacteria that can manifest. Also, you just made the effort to clean up, don’t negate it.

This is a big no, no. Never, ever wear a pair of shorts a second time without first washing. Bacteria can manifest in the chamois particularly if it didn’t dry out all the way. Also, the shorts themselves will just be plain nasty, leaving you with a “not clean” feeling before you even start riding. Even if you only have one pair of shorts, wash them and dry them completely before wearing them again.