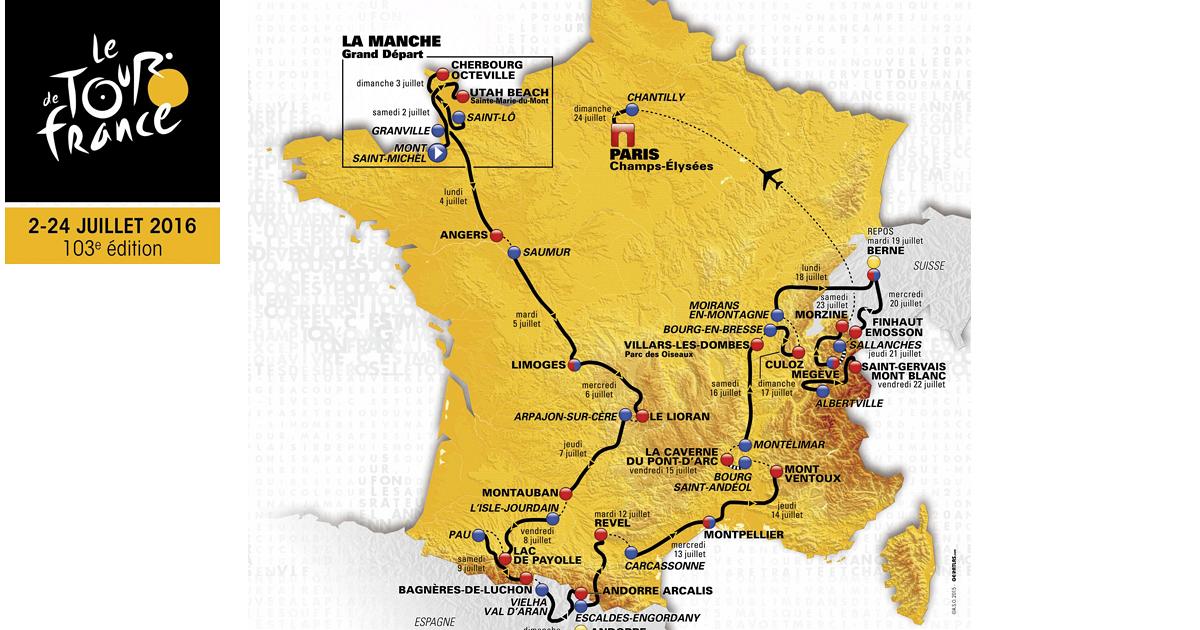 The Tour de France starts on Saturday, July 2nd in the Northern part of France in Normandy on the island of Mont Saint Michel with a 188 kilometer (117 mile) flat opening road stage. The first week starts with flat to medium mountain stages but ends with two mountain days before the race’s first rest day. Riders will traverse the eastern and central part of the country on their way south to the Pyrenees and into Spain for a day. The race heads into Andorra, a tiny country nestled between Spain and France in the heart of the Pyrenees. The race then travels across the south of France toward the Alps with a mix of flat days, medium mountain days, and mountain days along with the first individual time trial. The race then heads into Switzerland with the second rest day in Bern. The final week of racing stays in the same area of the country in the Alps with three mountain days and an individual time trial plus the last flat stage into Paris.

The tour is always an incredible spectacle to watch whether you’re lucky enough to be in France or watching from half a world away. There are a number of ways to catch highlights or to see every minute of the race. Knowing how to watch the Tour de France before it starts will help to make sure you don’t miss any of the action.

In Person Of Course

What better way is there to watch a sport? In person of course. If you ever get the chance to go and watch a race such as the Tour, do it. It will be amazing and something you remember the rest of your life. When you’re not in France however there are still a host of ways to watch.

How To Watch the Tour De France on TV

The oldest way to watch a sporting event without actually being there is via the television of course. Due to the length of time its been around, sports coverage on television tends to be the best way to take in a race because they know the ins and outs of what’s going on and often have exclusive interviews with key people in the race, both riders and team directors.

In the US – NBC Sports – In the US, NBC has exclusive rights to the race so you won’t find it on any other sports network. The channel is not the standard NBC channel but rather their NBCSN channel. They may have abbreviated coverage or highlights on their main channel which is much more readily available than the sports channel. If you have a subscription you can also watch the race again on-demand online if you miss it during the day.

In Canada – SportsNet1 – If you’re in Canada you can watch the Tour de France live on SportsNet1.

In Europe – EuroSport – If you’re in Europe, coverage is always provided by EuroSport which is much more standard than NBC Sports is in the US.

As with any TV show or event, you can find pirated feeds of the race whether it’s the EuroSport broadcast, which is very popular, or the NBC Sports feed. With these however, the quality is often times much less than the above options and typically has a lot of pop-up ads not to mention the issue of legality. Three popular websites are: CyclingHub.tv, steephill.tv, and cyclingfans.com.

Because of the popularity of the race and the general camaraderie the sport brings, many places such as bike shops, fitness studios, bars, and restaurants, will show the race. At these place you won’t only be able to watch the race but also mingle with other like-minded fans.

Like going to a local establishment, going to a friends place to watch the race is also a great option as watching a race with someone is always a lot more fun. A good option for this is to watch the prime-time replay in the evening as in North America the coverage is always during the morning.