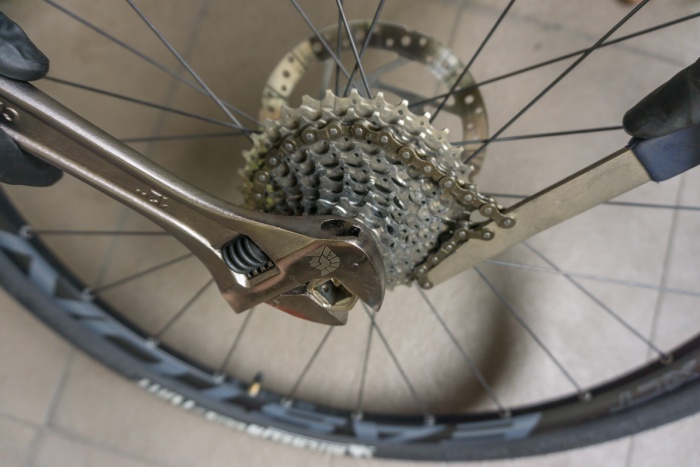 Changing a cassette can be daunting. There’s only one way to remove it and it requires two, sometimes three, tools working in unison to successfully remove a cassette. Once you know how to do it though, it’s easy. Hopefully you don’t have to remove a cassette too often but when you do, you’ll be able to do it with ease.

How a Cassette Works

From the outside, a cassette just looks like a cluster of gears sandwiched together as one piece and that it’s just part of the wheel. The typical cassette however is made of a number of cogs that have key cutouts on them which line up and engage the underlying “freewheel” on the hub of the wheel. These cogs are then held in place by a threaded lockring that tightens down onto the smallest cog holding everything in place. Removing this lockring is how you remove a cassette.

When Do You Need to Remove A Cassette?

You shouldn’t have to remove a cassette very often but if you are racing or riding over vastly different terrain such as steep hills followed by a day of mostly flat, you will want to change the size cassette you are using for optimal gearing. Also, depending on how much you ride and how often you change your chain, you may need to replace your cassette from time to time.

The first tool you are going to need is a Cassette Lockring Remover Tool. This engages the lockring on the cassette which must be turned counter-clockwise to loosen.

The second tool you will need is a Chain Whip or Sprocket Remover Tool which holds the cassette in place while you turn the cassette remover tool otherwise the cassette will just spin backwards.

The third tool you will need is a wrench to turn the cassette remover tool. They also make an All In One Cassette Remover Tool which can be handy.

How To Remove a Cassette

How To Install A Cassette

Things to Watch Out For When You Remove a Cassette