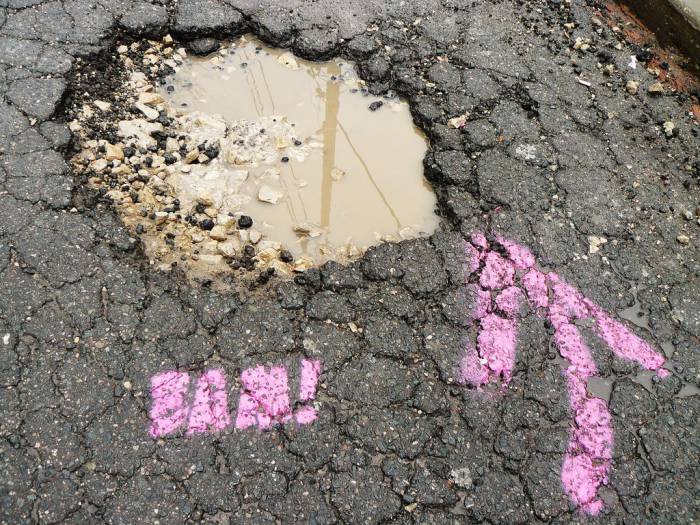 All cyclists face potholes — and they can kill you. In March of this year, Ralph Brazier, father-of-three and cycling advocate who has raised thousands for charity, was killed after hitting a pothole and being thrown from his bike. The incident happened in the United Kingdom, but dangerous road conditions and potholes cycling have no boundaries.

A Moment of Distraction

The pothole that claimed the life of Ralph Brazier probably came out of nowhere, a simple moment of distraction that all cyclists are subject to. That’s why it’s so important to keep an eye on the road at all times. If there’s one thing to keep in mind, it’s to stay alert when cycling.

Even the best standards of maintenance can’t completely rid roadways of the dangers of potholes cycling and it’s nobodies fault but your own if you hit one. Cyclists will never be safe from potholes, but there are ways of dealing with them.

Potholes don’t always appear as an open crater in the road and that’s one thing that makes them so dangerous. Potholes have many shapes and configurations. Some of the worst potholes such as sinkholes, don’t look like craters at all and are hard to spot. Sinkholes have a smooth bottom and sides. When you drop a front tire into a sinkhole, it catches you off-guard, and you go down hard.

Other types of potholes (blowouts) have the rugged crater appearance that flattens tires, damages wheels, and bodies. You may or may not have time to react to a blowout pothole. There are certain things that work better than others to keep you safe when you spot a pothole of any type.

There are two main options to crashing into a pothole — swerving or bunny hop. The bunny hop can save you from crashing and is sometimes the best option. If you’re not familiar with the bunny hop, give it a try before employing it at the last second.

Swerving can cause an even a worse crash, bring down fellow cyclists,  or put you into the path of oncoming traffic. If you’re out there by yourself — and traffic permitting — swerving is an option and one that you’ve likely employed a lot of times before, just be extremely careful when swerving to avoid a pothole.

Emergency braking for a pothole can be just as dangerous as swerving, especially if other cyclists are involved. If you have enough time, a certain amount of feathering can help to slow or stabilize you and your bike before hitting the pothole. You should always ride with at least one finger on the brake levers anyway and try to apply the front and back evenly. Using brakes is your call, depending on conditions, but avoid locking them up. Once you’re committed to riding through the pothole, try to stay off the brakes, and focus on getting through it keeping your hands firmly on the bars.

The Scenario — What to Do In an Emergency

Okay, you’re moving along at about 15 to 25 mph, you spot a pothole and swerving is not an option. If you have time to react bunny hop it. If the bunny hop is not an option for potholes cycling, here’s what you do. Lift yourself out of the saddle in a crouched position, your legs bent to absorb the impact. With your pedals level, body relaxed, hit the pothole dead center if possible. Un-weight your front wheel as much as possible to allow your front tire to bounce off the other side and climb out of the pothole without deflecting. A quick jerk upward on the bars can help to un-weight the front end at the last second. Don’t panic. That’s about all you can do.

Staying alert is the best way to avoid hitting a pothole cycling. If you start to drift mentally while you’re riding — so easy to do on a nice day — you may find yourself face to face with a pothole and a serious injury. Keeping alert at all times with your eyes scanning the road ahead of you helps you to avoid injury and damage to your bike, particularly your expensive wheels. And don’t forget to wear your helmet. You’re never too old for a helmet or a serious accident. Your helmet can mean the difference between life or death.

What Cyclists Can Do About Pothole Awareness

Bicycling communities in the United Kingdom and United States have begun to organize to specifically address pothole hazards. Here’s what you can do if you see a pothole. (This is particularly for cyclists who use cell phones, because motorists typically don’t have the time or inclination to report potholes.)

Fillthathole.org.uk is sponsored by Britain’s National Cyclists Organization. It offers an online tool to direct local authorities to potholes spotted by cyclists.

The San Francisco Bicycle Coalition sponsors its Good Roads Campaign which encourages members to use the city’s 3-1-1 system to report potholes as well as to mark dangerous potholes with neon yellow spray paint. The Coalition also conducts audits of worst-condition pavement and lobbies the city to prioritize pavement maintenance of key bicycling corridors.

Most cities have a 3-1-1 system in place but other phone apps such as SeeClickFix and SaveMyTire enable bikers to report pavement problems to the appropriate municipalities by shooting a photo with a GPS-enabled smartphone. The report is then made automatically. Be safe out there and pay attention.