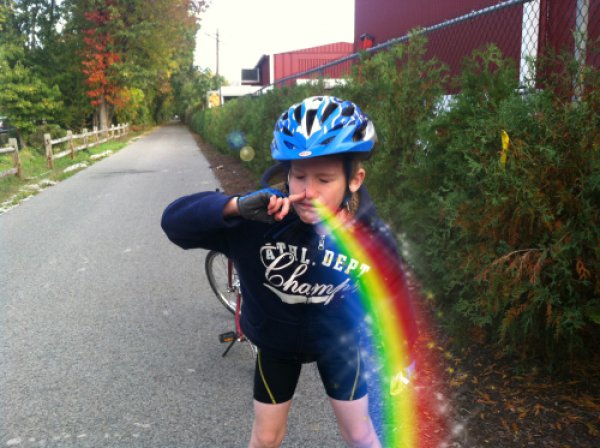 With the colder months bringing cold rides, your nose wants to do nothing but run. You should have told it you were going on a bike ride, not a run. There’s only one real solution to a runny and stuffy nose while riding; the snot rocket. It may seem a bit “gross” or un-gentleman or un-women like, but while riding, it’s a perfectly acceptable practice.

Knowing how to properly blow a snot rocket as well as when and where it’s appropriate are the prerequisites to blowing one. If you don’t do it right, you’re not allowed; you risk getting snot all over yourself, the people around you, and just look like a fool. Follow these tips and you’ll be doing it right and breathing snot free on your next ride.

The Technique of the Snot Rocket

Before you need to know when and where you can do one, you need to make sure you’re doing a snot rocket correctly.

The Snot Rocket With People Around

Nothing is worse than getting snot rocketed on. Make sure before you do it that there is no one even close to the projectile range and don’t forget to gauge the wind. In a group, you should wait until you’re at the back. If you can’t get to the back, ride further to the side of the road and get your head as low as possible as to not get the rider immediately behind you. If you stop and are in the company of non-cyclists, say outside the coffee shop, let it wait. Cyclists know what you’re doing. Others do not.

In addition to the snot rocket, no one wants to be spit on either. When you’re riding, there is always wind and if you just spit normally to the side you’re likely going to get the rider behind you. To avoid this, get your head as low as possible and give a forceful spit. At the same time, take your arm on that side and put it down almost so you’re spitting down it. This will make sure it doesn’t blow back and hit the person behind you.

When you master the snot rocket and the spitting technique and where it’s appropriate to do, you will be pre-approved to do it at your leisure. Just be careful of the rider ahead of you who hasn’t been pre-approved. There’s always someone.