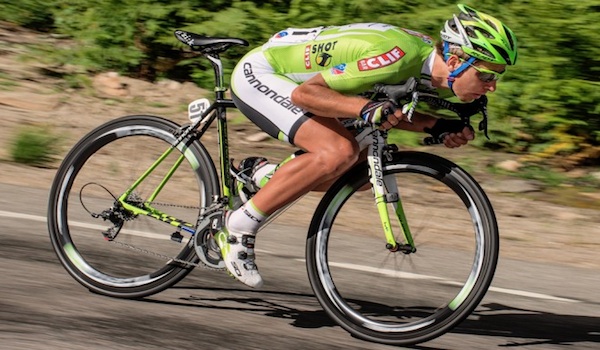 Descending is a mysterious art form, which, if mastered can shave minutes off your times. Some riders seem to possess an innate ability to drop like a stone from the side of huge mountains without any trace of fear – others are not so blessed. Recent summit finishes in the Vuelta España have shown that, even for the best climbers, going uphill presents an opportunity to take a few seconds or a couple of minutes from your rivals. A good descender can take five minutes on the way back down. It’s a fantastic skill to have in your arsenal and believe it or not, it doesn’t take that much to master.

If you’ve ever felt the fear on a descent, suffered a nasty crash that you haven’t quite mentally recovered from, or have simply never been told how to do it right – we’ve put together some essential tips which will have you nailing it downhill with supreme confidence.

Look as Far Ahead as Possible

It sounds pretty obvious, but when riding a bike, you will go where you point yourself. So much of where you’re ‘pointing’ comes down to where you’re looking (with the exception of the odd glance back over your shoulder to check the position of the pursuing peloton). When descending, don’t just look ahead of your front wheel or the rider in front of you, instead try to set your gaze well down the track, ideally after the bend you’re currently tackling. If you do this, you’ll flow through the bends with ease and you’ll still catch small hazards like gravel in the road or someone trying to overtake on the inside with your peripheral vision.

Body Position is Everything

We’ve all seen the likes of Peter Sagan and Vicenzo Nibali heading down the slopes of Grand Tour climbs with their bodies contorted into an aero tuck. While we wouldn’t suggest you go the whole hog and start sitting on your top tube at the slightest downward incline, a good low position on the bike like the pros’ is what you should be trying to emulate. When you’re descending it makes sense to get as low as possible on the bike. Yes, it makes you nice and aerodynamic, but that’s only part of the benefit.

Being low-down to the bike also lowers your centre of gravity, making you more stable as you corner and providing better power through the pedals into the wheels. When you’re hurtling into the bends, fight your instinct to lean into the curve with your body – instead, keep your body weight above the tyres as much as possible and lean the bike instead. This’ll boost the traction you get through the turns.

Learn to Read the Road

Unless you’re blessed enough to live at the foot of an Alp and you never venture further than a few km from home, it’s likely that you won’t always know the roads you’re descending like the back of your hand. If you can get used to reading the signs along the road it’ll really help you with your descending. The more you descend, the better you’ll get at recognizing the signs. You can predict where the bends will come by looking at the profile of the hills ahead of you. In the same way, you can also use the tree-line to predict what will happen next, before it does.

Be mindful of hazards and interpret what’s at the side of the road. Shops, restaurants, bars and other businesses all mean people, so don’t be surprised that after you pass one of the aforementioned there’s a guy walking home around the next bend. Likewise, if you hear the clanking of cow bells then you’re probably going to meet something bovine at some stage of the descent. Just because you recognize these hazards, doesn’t mean immediately killing your speed, it just puts you in the right mindset to respond quicker should such an obstacle arise.

Getting Your Bike Set Up Right

Having a bike that is properly maintained and set up will do wonders for your descending, not just from a practical point of view, but from a mental one as well. Having full confidence in your brakes is a must, but having your bars correctly positioned and your seat at the right height will also play a big role in helping you drop like a stone.

Having ridden a hire bike in the Pyrenees for a couple of days I can say without doubt that I was slower on the descents on the first day than the second. At first I was wary of the unfamiliar setup, including front and back brakes that were on the opposite sides to my own bike, but as my confidence in the machine grew, my descending speeds also began to rise.

Guess what – it get’s cold at the top of very high mountains. Especially if you’ve just been labouring to get to the top for an hour and you’re dripping sweat. It can be tempting to see the descent of a climb as the break or reward after your exertions, but it’s vital that you keep your heart rate high and your moving parts moving.

Get into a low-ish gear, with enough traction that you can still pace it out of the climbs, but one that will have you spinning a high cadence. This way you can keep the blood flow to your legs going and keep your all important heart ticking over too, so when you hit the flat at the bottom you haven’t frozen up completely.

At the top of the major climbs in big races you’ll often see the pros take a jacket or (if they’re old school) a sheet of newspaper from a soigneur at the side of the road, to keep them warm as they plunge back down the other side. Unfortunately, for us mere mortals, there’s not going to be a dude handing out free jackets, so make sure to carry one with you. If you’re confident enough in your bike handling skills to put it on while moving, do. If you’re not, take a pit stop at the top and layer up.