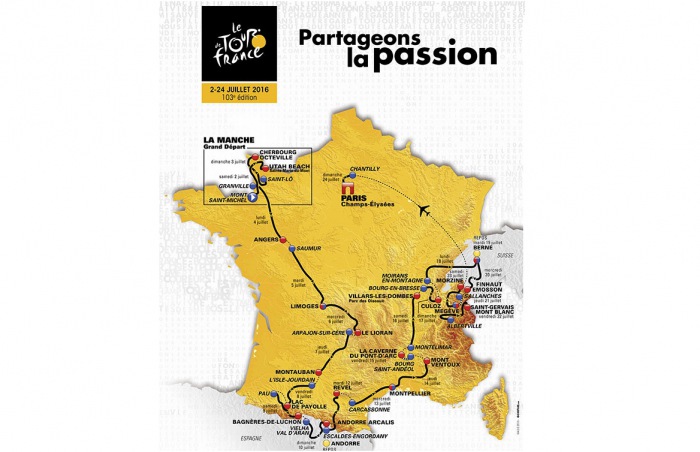 Why would someone ride a bike across France for thousands of kilometers? The answer was simple and still is. In the early 1900’s it was to sell newspapers and now it is to boaster new products through sponsorship and feature attractions around France such as spectacles and cities. To do so the organizers must layout scenic and iconic routes. How do they create a route that is challenging, memorable, and even logistically possible? First you need to know a little bit of the history of the Tour de France Route and how it grew into the world’s largest sporting event.

The Tour de France began in 1903 and was a publicity stunt to sell more French newspapers. In the beginning, the Tour de France route was six stages with a field size of about sixty contestants. Talent ranged from riders solely up for the challenge to racers that were sponsored by different bicycle manufactures. The field was comprised of primarily French competitors but several Belgians, Germans, Swiss, and Italians took part. The race began in a suburb of Montgeron, at the Café au Reveil Martin. Who would have guessed the first Tour de France cyclist started from a café? Every year with the exception of 1915-1918 and 1940-1946 due to World War I and World War II the Tour de France has been held. (Follow this link for More Tour de France Facts)

Route Selections and How the Organizers Decide

A lot goes into planning the Tour de France route every year. Cities are selected years in advance through much consideration and planning. Jean-Louis Pagês is the man responsible for which cities get to host the top cyclist in July. If a town is interested in hosting the Tour de France they first submit a letter to the Amaury Sports Organization (ASO) requesting to be an arrival or departure town. Pagês then visits the town to see if the town can handle such a large caliber event. If the city is selected to host the start of a stage they must pay a sizeable fee of no less than $50,000 (often times considerably more). To host a finish, the rate is doubled. Allegedly London paid well over $2 million dollars just in fees to the ASO to host the grand depart in 2007. Over 200 applicants are considered to host the 21-stage race. The Tour de France route has always featured several iconic mountain stages such as Alpe d’Huez, Mont Ventoux, Col du Galibier, and the Col du Tourmalet. Since 1975 the Tour de France has finished on the Champs-Elysées in Paris. The depart cities always change and rotate through France, but it is safe to expect these race finishes to always have a place in the Tour de France.

The 2016 Tour de France Route will cover an astounding 3,519 kilometers and visit three different countries before finishing on the Champs-Elysees in Paris. Sixteen new cities will be visited for arrivals and departures throughout the race. In 2016 the Grand Depart was from Mont-Saint Michel and finished on Utah Beach, one of the new stage cities in honor of D-Day. On this day we saw Mark Cavendish outsprint Marcel Kittel to claim the yellow jersey. This year the race has selected 9 flat stages, 1 hilly stage, 9 mountain stages and 2 individual time trial stages. Out of the 9 mountain stages, 4 are mountaintop finishes which add another level of complexity to route selections and logistics. The route is run in a counterclockwise direction this year traveling down to the southern boarder of France  and into the Pyrenees before heading northwest into the Alps and before returning to Paris.

No doubt, Pagês is already planning more extravagant and beautiful stages for the future. The 2017 Grand Depart has already been announced and will start in Dusseldorf, Germany. This will be the fourth time Germany has hosted the Grand Depart, thirty years after West Berlin in 1987. The entire route for 2017 is likely already approved and finalized by the ASO, although the public will not be notified until the fall. While we are only thinking about the 2016 Tour de France, Pages is already planning extravagant and breathtaking stages several years from now.

Corey has been riding and racing bikes for the past 6 years. He started riding mountain bikes with his friends in high school and quickly progressed through the ranks which lead him to collegiate cycling where he transitioned to road racing. He is a graduate of Mars Hill University with a degree in business and is currently racing at the elite national level. He aims to bring a well-rounded background to I Love Bicycling from tech to training.