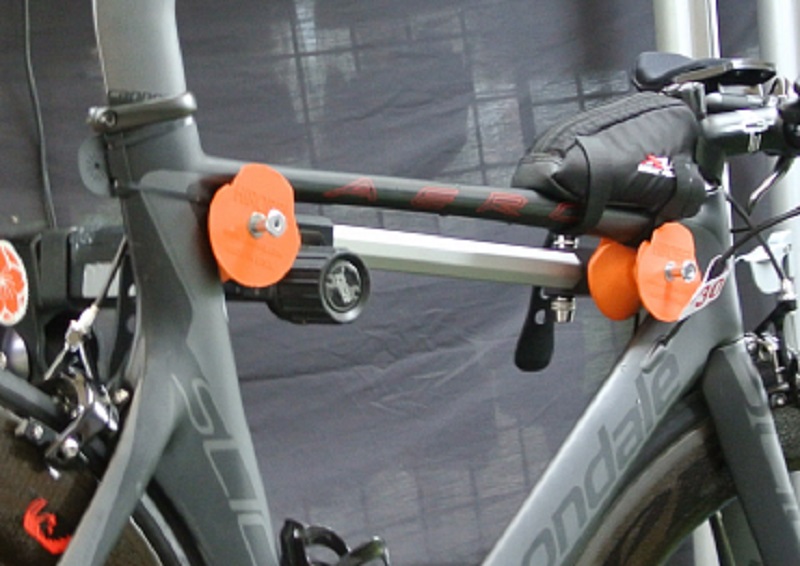 Modern bikes are made out of wonder materials that make a bike light, stiff and also forgiving. These carbon bikes and more recently, the resurgent super thin walled alloy bikes, provide a durable ride. Try getting a one of these bikes in a repair stand to work on it and the wonder material has you wondering how durable it really is. Along with materials you should not clamp, frame tube and seatpost shapes do not often mate with repair stand clamps. This is because the bikes design is for riding, not clamping in a stand. Do you risk it and clamp it? Do you get a fork mount stand, foregoing any ability to work on the front end? Do you hang the bike by the saddle and fight it swinging around? 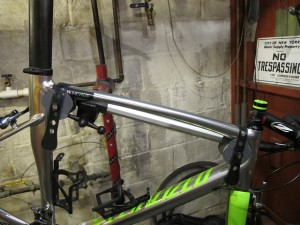 Hirobel thought outside the box to solve the problem of working on a fragile frame in a repair stand. Instead of making a clamp that would be less likely to crush a frame tube or seatpost, they reset the paradigm. They do not like doing things they way they have been done for years just because that is how they have been done. There are plenty of stories of bikes shops and home mechanics crushing frames. Hirobel’s goal is to take away the human error and make supporting the bike as gentle as possible.

Additionally, it is backwards compatible. It will work with almost any repair stand with no issues. You do not need to keep up with technology updates in repair stands or frame shapes and materials. You can also keep your front wheel on the bike, allowing you to adjust front brakes and the headset. A fork mount stand is more gentle on a frame but does not allow any front end work. 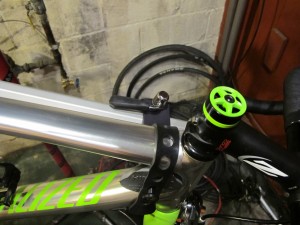 Once I did my reading, I found that I have one of the few repair stands that is not completely idiot-proof. It is an old Wrench Force stand with a spinning handle to tighten the clamp. That handle bumps into the frame bumpers on the fixed block. My solution was to push the handle between the two bumpers, but after speaking with Brandon at Hirobel, I could have slid the octagonal rail down an inch for clearance and still not exert too much leverage. It is a minor concern most people will not have and once it is in the repair stand, it does not need to go anywhere. 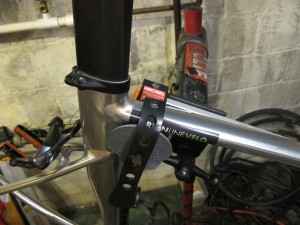 Working on my bike was a relief from my normal procedure, which is hanging it by the saddle from the repair stand. I had to spend a lot of effort stabilizing the bike, chasing it around and holding on to it to make sure it did not drop from its precarious perch (even though I now have zero carbon bikes, I do have very thin-walled alloy bikes). I have been even less excited about it since my teammate gave me a carbon-railed saddle; how is all this sliding damaging the rails? It is not a worry now. The bikes are stable, making my cleaning and repair efforts more efficient, and the bikes are safer because the Carbon Frame Clamp has a secure but gentle hold. The neoprene straps are secure and the bumpers cradle the top tube at the head tube and seat tube junctions. The front block slides into place at the head tube/seat tube junction and locks down with a quick release. They also have nice grooves to allow cables to run along the clamp without interfering with their function. It is a smart touch that is necessary to work on the bike.

Is it for the Average Rider?

Yes, it is. If you are spending a few thousand dollars on a nice bike and plan on working on it yourself at all, spending another $250 to ensure the bike stays nice is no great leap.

Every Bike Shop Should Have One

It is also a great idea for bike shops. If I brought my bike to a shop, I would want to make sure that they had a safe way to clamp it so it comes back to me in better condition than when I brought it to the shop. No shop wants to break a customers bike and this is another way to ensure mechanics can efficiently and safely repair bikes.

The Hirobel Carbon Frame Clamp is the best solution I have seen to work on a bike without harsh clamping or precarious hanging. It is straightforward, stable and easy to use. It might not be as exciting as something that makes you feel faster, like carbon wheels, but you cannot go very fast on a broken bike. Keeping your bike in tip-top shape is always faster anyway. Everyone knows that.