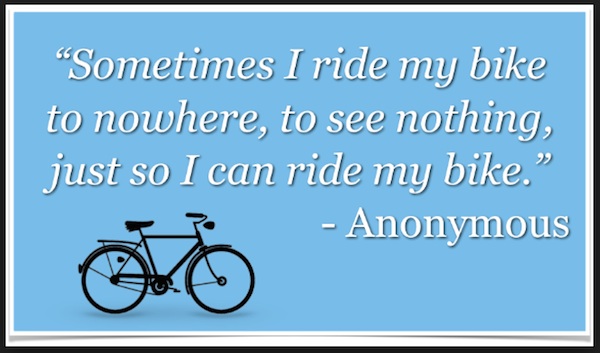 They say that “Necessity is the mother of invention” (although that’s not quite how ‘the Chef’ in “Lock, Stock & Two Smoking Barrels” described it. . . . . ) however, I digress.

I had been unemployed for a year after completing a diploma in visual arts & finally scored a job at Brisbane airport, which required working the most diabolical shift-hours I have ever known. It also required travelling 25klms each way, which is a neat trick when you don’t own a car. My art teacher, Dave, an avid cyclist, not only told me to “ride a bike” but very kindly loaned me his mountain bike in order to do so.

I hadn’t ridden a bike for something like 20 years, so it was with equal parts enthusiasm & trepidation that I set off for a ‘test-run’. That first ride to the airport took me an hour and a quarter: I wondered if I might die & was any job worth it. From zero kilometres for 20 years to 250klms per week.  It made me hurt in places & in ways I had never imagined !  When the people I worked with found out I was riding a bike to & from the airport, at all hours of the day and night, they not only dubbed me ‘Bicycle-Bob’, but laughed & declared I would not last a month. But I persevered.

Three months later, Dave got his mountain-bike back & I upgraded to a flat-bar road bike. Which I thought was some kind of wonderful, that’s a fact. I was, undeniably, thoroughly enjoying myself & not just because I had an income. I was surprisingly fit & simply loving riding empty roads & bike-paths at 2 & 3 o’clock in the morning (or not so empty roads at midday: stupid bloody shiftwork !) As an aside, my personal track-record on the Boondal Wetlands bike-path is 16 spider-webs in the face in one trip; a ‘delight’ you simply cannot experience in a car.

After another few months, Dave introduced me to clip-in shoes. He did warn me that I would hate him for it, (for not having told me about them sooner) & he was right.The difference it made was quite remarkable: not only do you not LOSE any power on the up-stroke, you GAIN it ! And, just for good measure, once you are familiar with it, you can isolate different muscle-groups so that when the ‘up-stroke muscles’ are working, the ‘down-stroke muscles’ can have a rest & flush a bit of lactic acid away. The upshot of which is, you can ride stronger for longer.

And then there’s the DOWN-side: for all this joy, there IS  a corresponding bummer: guaranteed. You WILL fail to UN-clip: almost inevitably in front of lots of people. You may wish the Earth would swallow you whole: you may believe embarrassment to be terminal: neither of these things will happen. You will hurt yourself to a greater or lesser degree: maybe a bruise & a bit of bark off: maybe a dislocated shoulder: maybe you’ll get a grass-stain on your shirt. That’s in the lap of the gods. Do not be deterred by this: it shouldn’t happen more than a couple of times.

Six months later: with a respectable tax-refund to splurge & insane urges to also ride on my days off, I lashed out & bought a carbon-fibre road race bike. OMG ! Now it was Dave’s turn to hate me: ah, jealousy. . . . . .

At this point, what had started as a poor-man’s-means-to-commute had evolved into something of an obsession & I found myself riding 40klms to Dave’s place so we could then ‘go for a ride’, generally over Mt. Mee & wherever else took our fancy. Several ales after which I would curse his name as I left his place to ride home. Can’t recommend that, to be honest. I mean, riding a bike half-cut is just plain stupid & dangerous. It also HURTS SO MUCH, having ridden 80 or 100klms, then sitting for an hour or so (& consequently seizing-up) before getting back on the bike for the ride home. Just DON’T do that: OK ?

I have ridden through floods & baking heat; I have crashed; I have sworn at punctures &   revelled in miraculous views. I have made friends who share the Joy of good health & positive energy ( & the occasional beer. ) I have scared the shirt off me (to put it politely) whilst screaming downhill at 80kph: I have busted-a-gut to get my butt UP those very same hills. Two years after getting on my bike for the first time in 20 years, I was doing the commute in 35mins. Quite simply; it is THE best addiction one could possibly have. So, if you are even idly contemplating the possibility of taking up cycling, there is only one thing for me to say: get on your bike!